Strong growth in demand out of Asia as the Chinese New Year approaches has boosted maritime freight rates towards Europe. Particularly since several shipping companies have at the same time delayed vessel departures.

Wide-ranging postponements of vessel departures, coupled with greater demand for loadings as the Chinese New Year approaches on January 25, has created clearly visible short-term tensions over available space between Asia and Europe. The trend is reflected by freight rates movements in Upply's data base for the Shanghai-Fos route. 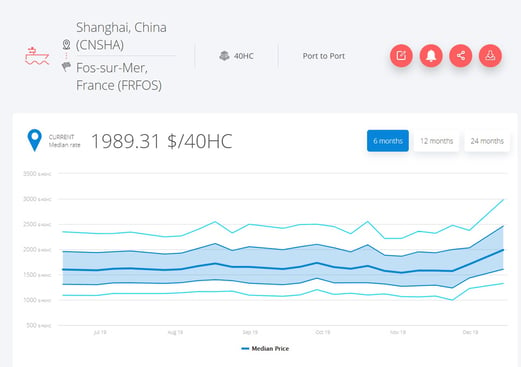 At a time when priority is going to getting merchandise aboard ship, long-term FOB contracts for goods coming out of China are being neglected by the shipping companies in favour of the CIF spot market. It is clear that, at this time, high offers are the best means of securing early loadings and this has generated the price flare shown by the Shanghai Containerised Freight Index (SCFI).

Who are the winners?

Chinese exporters, who are able to switch urgent deliveries from FOB to CIF as a means of obtaining a guarantee of space and then to pass on the extra cost to their clients, can come out the winners in the short term…and perhaps also in the long term. There is a risk that the new habits formed in this period will be maintained and it will prove difficult to return to FOB contracts when the pressure on space relaxes at the end of February or in early March.

Rail could also come out well. It is a highly tempting option for French importers, taking account of uncertainties about ship loadings and of the dramatic situation at the French ports of Fos and Le Havre, which have been seriously impacted by strike action in France since December 5. Protests over the French government's proposed pension reform have persuaded some shipping companies to avoid calling at French ports. MSC is the company which has proportionately cancelled the most port calls because of the strikes and it is estimated at this point that container volumes handled by Le Havre and Fos fell by 30% in December.

Dunkirk is playing an interesting role in this context but, overall, France is again offering additional cargo volumes to the Benelux ports and Piraeus in the Mediterranean. The Greek port is playing a sort of buffer role at the entrance to the western Mediterranean. Once it has been unloaded, cargo is left there waiting under the control of Chinese-operated terminals.

Who are the losers?

The traditional French retail sector, which relies on FOB contracts, is heavily exposed to additional delays and extra costs at a time when this sector of the economy is already facing a structural reduction in its volumes.

A return of the boomerang is inevitable and already expected. When they can, the most experienced European importers have anticipated the current period by placing extra stocks in their warehouses. This will enable them to weather the storm and return to the fray after the Chinese New Year.