The continuing pandemic situation in Southeast Asia and the energy shortage in China have seriously affected the manufacturing capability in East Asia. In the meantime, the ongoing supply chain disruption now makes nearshoring an increasingly pertinent supply diversification option.

In recent months, the fight against the ongoing pandemic has taken its toll on Southeast Asia, which until now has been among the most promising options for supply diversification. Since June 2021, Vietnam's Purchase Management Index (PMI) has been below 50, indicating contracted manufacturing activities (Figure 1). The manufacturing capacity in some other Southeast Asian countries is also restricted. Thailand’s PMI over five consecutive months indicates contracted manufacturing activities. The apparel and footwear manufacturing sectors are among the most hard-hit industries.

The diminished manufacturing activities in Southeast Asia forced companies to seek alternative production sites, especially with the upcoming holiday season and the anticipated rebound in retail consumption. One of the most serious options is undoubtedly China. 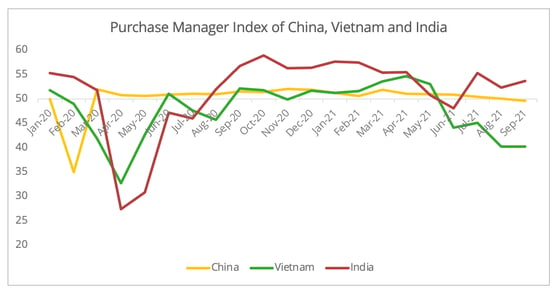 However, the current energy shortage in China created an asymmetry between the curtailed manufacturing capacity and export demands (Figure 2). Some of the areas that are particularly affected are the key manufacturing hub provinces in China, such as Jiangsu and Zhejiang. Some administrative measures have been implemented to expand domestic coal supply, though domestic production is temporarily hampered by the harsh weather conditions. Simultaneously, China accelerated its international coal sourcing. According to Reuters, Chinese imports of coal jumped by 76% in September.

Therefore, one needs to be aware that firstly strain on energy supply can increase inflation. However, limited capacity to meet global demand for coal could also lead to higher raw material prices. Furthermore, the recent Chinese policy on liberalising coal-fired energy prices will also increase the manufacturing costs in China. However, due to the price surge policy intervention is being planned. Secondly, we can expect continued restrictions in the industry to reconcile energy consumption with environmental regulations, which will put a strain on Chinese export activity.

In contrast with the restrained manufacturing activities in East Asian countries, India has seen a robust recovery in this sector (Figure 1). According to the Indian Ministry of Commerce and Industry, September 2021 recorded a year-on-year increase of 18.59% for non-petroleum and non-gem and jewelry exports and a 33.14% growth compared to September 2019, surpassing pre-pandemic performances. The increase can be attributed to the growth in exports of engineering, chemical, textile, and electronic goods.

The strong performance is expected to continue. In the short term, accelerated growth of export orders in September compared to August indicates that shippers are continuing to seek alternative suppliers due to the curtailed manufacturing capability in East Asia.

In a more extended time spectrum, the fact that India is the third-largest Foreign Direct Investment (FDI) recipient in 2020, especially in the Information and Telecommunication Industry, following China (212 Billion USD) and the US (171 billion USD), means promising outflow from India, especially in the electronic machinery category.

Until now, the sourcing of diversification strategies has primarily benefited Southeast Asia, in line with the established know-how and low labor costs in this region and a pandemic situation that is relatively under control. However, the reduced manufacturing capability in East Asia, the record transport costs, and congestion across shipping modes now make nearshoring truly relevant.

In contrast with governments’ emphasis on the nearshoring/reshoring of strategic sectors, such as electric vehicles battery, and the pharmaceutical industry, current nearshoring moves are taking place in industries which are traditionally concentrated in Asia, such as furniture and apparel manufacturing. For instance, the Italian fashion group Benetton plans to halve its production in Asia and shift manufacturing activity to the Balkans and Eastern Europe to relocate closer to its market. Similarly, IKEA announced it will shift part of its manufacturing activity to Turkey.

In this article we will elaborate on the case of Turkey, one of the promising nearshoring options for the EU market.

In 2021, Turkey showed a strong rebound of its exports to the EU, especially from the beginning of the second quarter (Figure 3). In September 2021, the country registered an all-time record in its export history, with Germany, the US, and the UK being the top three export destinations. The disruption in East Asia may have mainly benefited the Turkish textile and apparel manufacturing sector, one of the country’s primary export goods. Turkey accounted for 13% of the EU's imports of textile and apparel in the first semester of 2021, 2% higher than 2019 [1]. A continued strong performance is envisaged in this sector's exports, with a PMI index of 55.9 in the clothing and leather products sector in September.

The temporary trade diversion has also been transformed into a more long-term nearshoring strategy. The FDI statistics may well support this. The FDI inflow to Turkey in the first five months of 2021 increased by 13% in comparison to the same period in 2020. Furthermore, even though Turkey's FDI inflow dropped by 16% in 2020, Turkey's share in global FDI inflow in 2020 increased slightly from 0.6% to 0.9% in 2019. This may also hint at a growing interest in Turkey as an investment destination.

In the long term, FDIs inflows are likely to generate growing outward flows from Turkey to the EU, especially in automotive and mobile phone-related commodities. These two industries were the primary source of FDI flowing to Turkey in 2020 and 2021. Noted that Turkey is particularly attractive to Chinese mobile phone manufacturers. Many of them, including Huawei, Xiaomi, and OPPO, have invested in Turkey, which may be the beginning of a strategic move to expand their market in EMEA. The heavy presence of Chinese mobile phone manufacturers in Turkey may also attract FDIs from intermediate manufacturers in this sector to form a regional supply chain cluster.

Therefore, the current global supply chain upheaval could prove to be a window of opportunity for the EU’s neighboring countries in North Africa and Eurasia to absorb investment from companies with a strong presence or interest in the European market.

Of course, nearshoring is not easy to execute and cannot be implemented overnight. Recent research funded by the German government on the nearshoring potential of the west-Balkan indicates the quality of labor, red tape in local governance, and infrastructure quality remain the main hurdles. These factors do not just apply to the Western Balkans, but are general concerns for nearshoring. Besides, in the case of Turkey, the political tension with the EU also increases unpredictability in bilateral economic relations.

From Globalization to Regionalization?

The pandemic seems to reconfigure the global supply chain into a more fragmented yet more regionalized pattern. Nearshoring does not only apply to the European or the US markets, but also to East Asia. The EU Chamber of Commerce’s annual business confidence report for China in 2021 marked the lowest intention among surveyed EU companies to shift their investment elsewhere. Aligning with “in China, for China”, the decision to onshore in China helps enhance their supply chain resilience by maintaining competitiveness in the Chinese market.

However, sourcing entirely locally or regionally is particularly challenging for industries with deeply embedded global supply chains. One of our earlier articles showed that diversification could also generate increasing trade connections between China and diversification countries. According to a recent WTO report, in the first quarter of 2021, Chinese exports of intermediate goods surged by 41%. While more and more companies may start to address the feasibility of nearshoring options, the thriving global trade in intermediate parts should continue.