Taiwan: Tensions have not triggered a rebound in freight rates

FAK maritime freight rates between Asia and Europe continued to drop in August, despite renewed tension between China and the United States over the Taiwan issue.

Tensions between China and Taiwan are not new. This is a factor to be closely monitored, as this situation which is smouldering beneath the surface is likely to seriously jeopardise the mass container trade between Asia and the West if it escalates.

In August, the visit of Nancy Pelosi, Speaker of the US House of Representatives, followed by a delegation of members of the American Congress, revived tensions. China has retaliated through military manoeuvres but the escalation has stopped there... for now.

While Asia-Europe maritime freight rates have been experiencing some erosion since the beginning of the summer, this new tension in relations between China and the United States has meant shippers are fearing a new rebound. But this geopolitical context has not been enough to offset the effects of the decline in demand. As a result, the lull in rates continued throughout August. 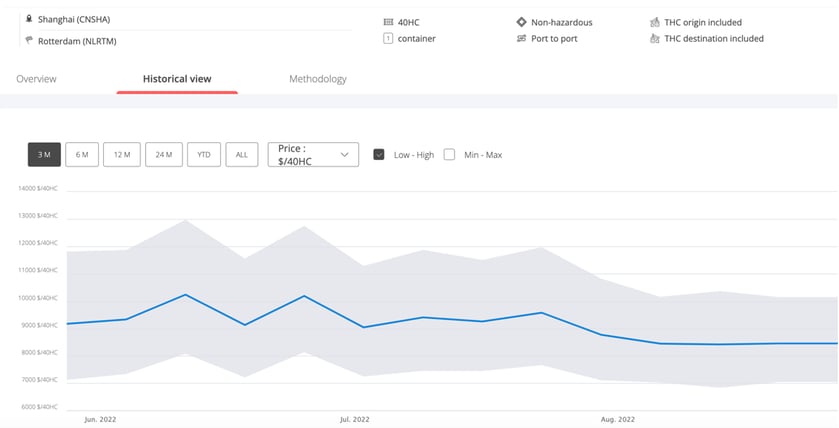 The thorny question of ship safety

However, this geopolitical situation may in the very near future change the situation of the commonly used sea routes. Shipping companies might be tempted to avoid the "hot" zone of the Taiwan-China Strait, if only due to pressure from insurers, even if they remain relatively unworried for the time being about this issue. This would mean extended delivery times. In the short term, this renewed uncertainty does not encourage the much-needed normalisation of global supply chains.

Another new issue is the safety of merchant ships and their ability to defend themselves, beyond "typical" piracy. This issue has been clearly identified. "The conflict in Ukraine is primarily land-based, but it has revealed the direct effect of competition on flows for our economies. The blockade imposed on Ukraine has forced a major reconfiguration of the country's export flows and, in the long run, has put its future at serious risk, as recently illustrated by the discussions surrounding the export of Ukrainian wheat. Europe's dependence on maritime flows is also considerable for consumer goods and, more recently, for energy. (...) Our navy and Allied navies are the actors in securing these flows," recently recalled Admiral Pierre Vandier, Chief of the French Naval Staff during a hearing in the National Assembly (in French).

Will merchant ships, in addition to this traditional military presence, have to consider other protective measures, as they have done in the face of piracy? Today, new lightweight technologies are available, and it is neither inconceivable nor particularly complicated to accommodate on board merchant ships military personnel manning such equipment. However, if the world's trade fleets moved in this direction, it would make a profound impact.