Tanger Med: An overview of the Logistical and Industrial Free Zones

DOSSIER. Tanger Med has established logistical and industrial free zones around container and Ro-Ro terminals. In total, 1,600 hectares of land are now devoted to these various activities.

Tanger Med Special Agency, the special agency in charge of managing Tanger Med, has created a subsidiary, Tanger Med Zones, to develop industrial and logistics free zones around the port. As soon as the foundation stone of Tanger Med was laid in 2002 (see our chronology), King Mohammed VI called for the construction of a zone adjacent to the future container terminal, the Logistics Free Zone. His wish was for logistics operators to set themselves up near the port to bring added value to the containers that were to be transhipped at the terminal. 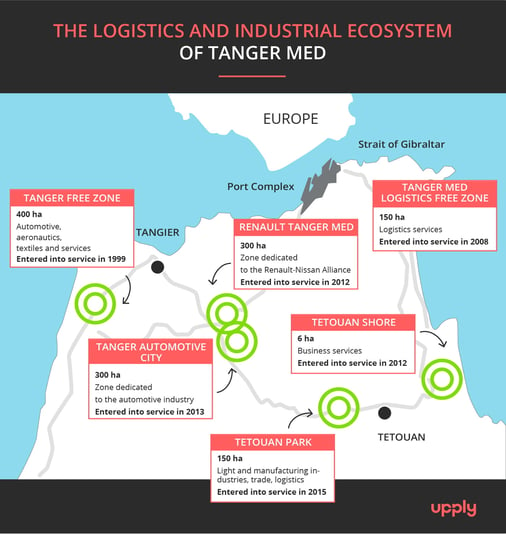 Since then ambitions have grown considerably (see our article on the logistics ecosystem developed by Tanger Med). A total of 1,600 hectares of land are now devoted to these different activities, within a radius close to the Tanger Med terminals. "Tangier is 14 km from Europe and has frequent ferry connections to southern Spain. Each year, some 720,000 semi-trailers cross the Strait of Gibraltar. By creating a terminal in Tanger Med dedicated to trucks, we were able to develop export-oriented activities", says Imane Agzenay Biyout, Director of Development for Tanger Med Zones.

The first to be created, the Tanger Free Zone is located south of the city of Tangier, 56 km from the Tanger Med terminals and around ten kilometers from the airport. This area, which covers 400 ha, was developed to attract companies wishing to work in the export market. "We have set up attractive tax conditions and VAT exemption for companies that are involved in exporting", explains Imane Agzenay Biyout. A principle which will then be applied to the other free zones around the port.

Focus on the automotive sector

The second zone created was the Renault Tanger Med Zone, specifically allotted to the French automotive group. In 2012, the manufacturer opened a factory in the Tangier region on 300 hectares of land, in the city of Melloussa, 30 km from the Tanger Med terminals. It produces 400,000 vehicles per year, including Dacia models such as the Sandero, the Dokker and the Lodgy. These cars are mainly intended for export. The opening of this factory led the port authority of Tanger Med to develop a Ro-Ro terminal on its site. "In the same spirit as for the first logistics zone, the installation of Renault was made possible thanks to advantageous fiscal conditions, but also with an agreement to transfer know-how and to create local jobs", explains the head of development for Tanger Med Zones.

Because a large part of the components for the cars produced in Melloussa are manufactured by subcontractors, the French automotive group wanted a dedicated space nearby. Therefore Tanger Med Zones created the Tanger Automotive City (TAC). Five kilometers from Renault Melloussa, it opened its doors in 2013. The aim is to bring together the automotive manufacturers who work with the Renault group and who export their products to Europe or North America.

Today the TAC brings together 50 companies of all nationalities, 90% of which have a direct link with the automotive industry. The remaining 10% are specialized in electronics and renewable energies. Consequently, Siemens set itself up in the TAC to build blades for wind turbines intended for the Moroccan market but also for export. “At the start of our activity, the companies that invested in this zone were mainly French and Spanish. We are now seeing strong demand from Asian companies ”, explains Imane Agzenay Biyout. The most recent is the Korean company Hands, which manufactures alloy wheels. China is also represented with ZTT, Japan with JTeckt as is India.

After six years of activity, the TAC is reaching its saturation point. Demand is still high and for the development of industrial activities, Morocco would like to see land added in the northern part of the area to accommodate logisticians. A first phase of 22,000 sqm of warehouses should see the light of day in the months to come. It is planned that this space will then be rented to a single logistics specialist who will be able to handle several customers. The second TAC extension zone should be located at another site. “We have available land in the area to build new warehouses on. We still have to make our choice, which will be based on the demands of the companies,” explains the head of development of Tanger Med Zones.

The complex’s fourth zone was opened in 2015. This was named Tetouan Park, it is located 25 km west of the city of the same name. The site covers 150 hectares and it is dedicated to logistical activities and light manufacturing industries for VSEs and SMEs. With around a hundred companies established here, Tetouan Park is not yet fully booked and should welcome newcomers over the coming months.

Also around the city of Tetouan, TMZ opened Tetouan Shore some 10 km north of the city. This area is primarily reserved for business services. It brings together call centers and IT development companies.

The last zone opened by TMZ completes the Logistic Free Zone. It is an extension to accomodate new businesses and is located behind the Tanger Med terminals. The Logistics Free Zone mainly brings together logisticians such as DHL but also manufacturers who want to open dedicated international distribution centers on the site. Bosch and Huawei have built warehouses in this area.

In addition to these different zones is that of Kenitra, located 250 km south of the port. In this city, the automotive group PSA has built a factory for vehicles destined for export. Given the distance, the production is shipped by rail to the port before leaving for various destinations around the world. It is the only rail link between the port and the different zones. “We are very close to the port's container and Ro-Ro terminals. It is neither necessary nor required by the operators to have rail routing towards the terminals for the occupants of the various zones ”, indicates Imane Agzenay Biyout.

The container terminals, the Ro-Ro terminal, the ferry terminal and the industrial and logistics zones have contributed to the concept of Tanger Med being based around a political desire to develop employment and activity in a region which has long suffered from a low employment rate. King Mohammed VI has called for this concept to continue to be expanded.

An budget of 9 billion dirhams (831 M€) has been alloted to build new industrial and logistical zones in this region. The region has a capacity of 5,000 hectares, of which only 1,600 hectares are currently occupied. Over the next few years Tanger Med could become the very heart of industrial logistics.

1/ Chronology of an ambition

2/ Beyond the port, a perfect ecosystem

3/ An overview of the logistical and industrial free zones

4/ A trouble maker in the West African hubs game


Graduated in law, Herve Deiss joined the transport, logistic and shipping press more than 20 years ago. From over these years, he has developed a specific expertise in all ports systems around the world
See all its articles