The Russia-Ukraine war has drastically modified certain trade flows between the EU and Russia. This article examines the changes that have taken place and the possible long-term impacts.

The Russia-Ukraine war is having an impact on trade between the EU and Russia, particularly in certain industries. Analysis of the most recent data provides a first insight into these changes, which we will address mainly from two angles: which alternative countries has the EU turned to for supplies and will this current short-term demand persist in the long term?

In the initial period following the outbreak of war, from March to August 2022, EU imports from Russia decreased by 28% in volume (tons), while increasing by 50% in value, due to inflation (Figure 1). In this article, we will mainly focus on trade volumes. 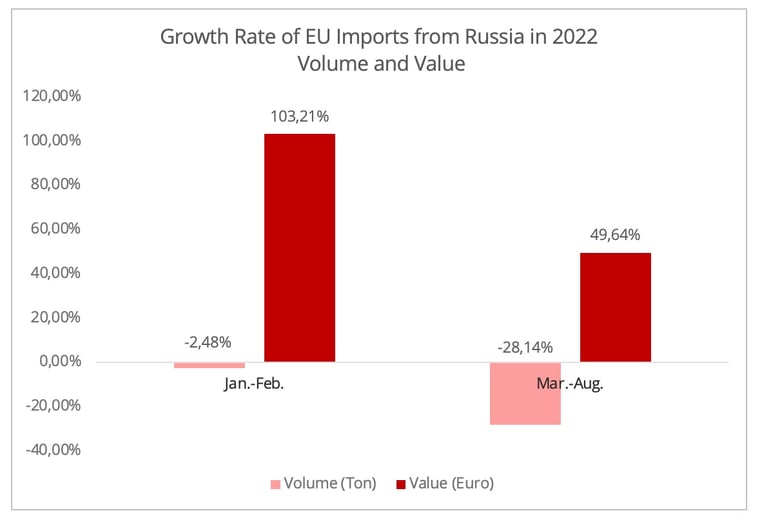 In terms of different industry sectors, among the EU’s top ten commodity imports [1] from Russia, the most significant drop occurred in the sectors of energy, chemicals, wood, and the iron and steel industry. As the energy sector has been widely discussed in research and media reports, our present study focuses on the other three sectors (Figure 2).

In response to the dwindling Russian supply, trade diversion took place in the EU’s internal and external sourcing. 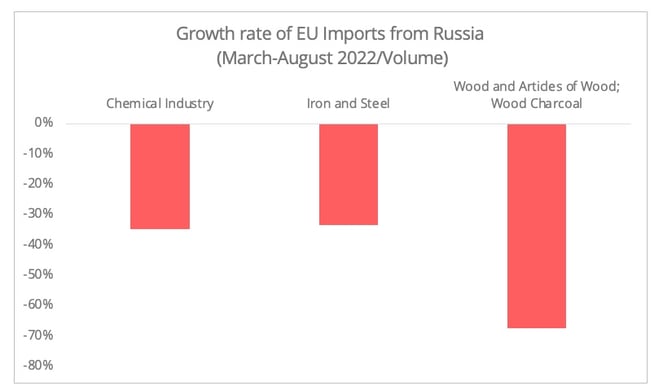 Amplified sourcing both internally and from non-EU European countries, such as Norway, occurred in the three sectors: chemical, wood, iron and steel. Intensified internal supply was especially discernible during the first two months following the start of the war (Figure 3). However, supply within the EU countries started to tumble at the end of the second quarter of 2022. This can be attributed to the diminished manufacturing capacity due to energy shortages and curbed demand under record inflation. For example, a recent survey by the German Chemical Industry Association revealed that 34% of the chemical production sites in North Rhine-Westphalia, a German chemical industry hub, had been forced to reduce production. 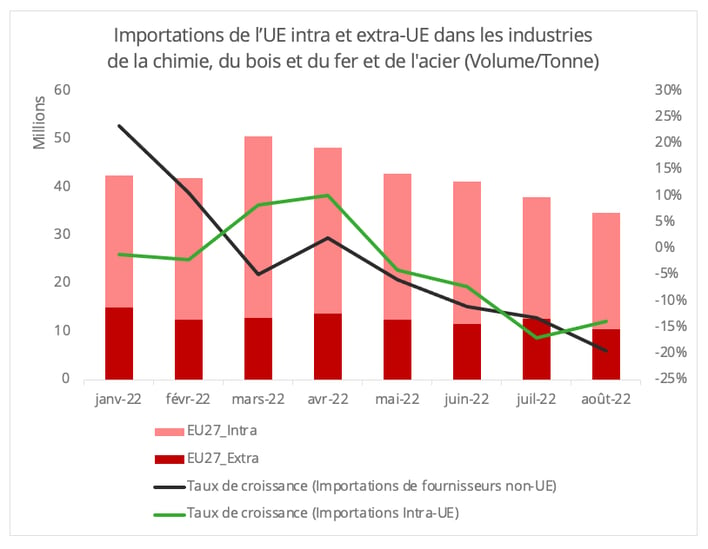 The EU imports from third countries have seen a staggering decline, however, trade diversion to a handful of alternative suppliers to replace Russia can be observed in all three industries. In particular, the geopolitical turbulence has created new demand from China in all three sectors, despite the EU's efforts to reduce its reliance on this country.

The gas shortage has hit the chemical industry the hardest, and the curbed capacity has led to spiked sourcing from outside of the EU, especially for the gas-intensive products required for further processing. In the first eight months of 2022, the volume of German imports of Chinese chemical products spiked by 30%, accounting for 60% of its total imports from extra-EU suppliers in this sector. The figure was less than 20% in 2021.

The changing trade flow in the chemical industry also leads to some new patterns in shipping activities. For example, the diversion of carbon black (chemical industry) supply from Russia to China has created some demand in rail freight via the trans-Siberian route from China to the EU, a route that had been severely affected by the war. The reason being that this product is shunned by ocean carriers due to safety concerns and the container cleaning obligations after use, especially in light of the tight ocean freight capacity during the first semester of 2022.

For the iron and steel industry, the EU has increased imports mainly from Turkey but also various East Asian countries, such as China, South Korea, and Vietnam. China is now the EU's second-largest non-EU steel supplier, following Russia.

As for the wood industry, a significant increase can be observed in sourcing from Brazil, the US, China, and the UK. In particular, both Brazilian and US wood exports to the EU surged by 62% in the six months following the outbreak of the war.

While expanding internal capacity is essential to the EU's strategic autonomy, the ongoing energy crisis has impaired domestic manufacturing capacity. Will the temporary trade diversion that we have observed become a new normal? It is difficult to provide definitive answers due to the tremendous geopolitical uncertainty. Nevertheless, in the following paragraphs we will endeavour to assess the possible evolution of EU supply and demand.

The absence of a foreseeable clear end to the energy crisis will continue to cast a shadow over manufacturing capacity. Particularly as a recent analysis by the International Energy Agency warns that the EU could face a gas supply shortage of up to 30 billion cubic metres during the summer of 2023. This is because certain factors that have allowed the EU to build gas stock levels to 95% of its total capacity could be absent next year, these include unseasonably mild temperatures, the near-normal supply from Russia during the first half of 2022, and China's 28% contraction in LNG imports in the first eight months of 2022.

This last parameter is expected to evolve. According to an analysis by Columbia University, three factors contributed to the shrinking Chinese LNG demand in 2022: the restrained manufacturing capability under the Zero-Covid policy, the diversion to pipeline delivery, and high spot prices. Although the zero-covid policy remains in place, there are signs of an easing up of the restrictions, which could lead to a recovery of Chinese LNG demand. Under these circumstances, the EU domestic manufacturing capability may continue to be impaired, generating a need for imports, especially for energy-intensive products. Furthermore, as we have observed the soaring German demand for Chinese chemical products, expanding exports from the Chinese chemical sector could also drive up the Chinese LNG demand.

Independently of the restriction in production, demand has also declined. Will the reduction in demand relieve pressure on the side of provision?

Indeed, the overall weak demand has reduced EU imports from both internal and external suppliers, as the statistics suggest. However, despite the decline in absolute volumes, the share from non-EU countries has gradually increased following an initial drop (Figure 4). 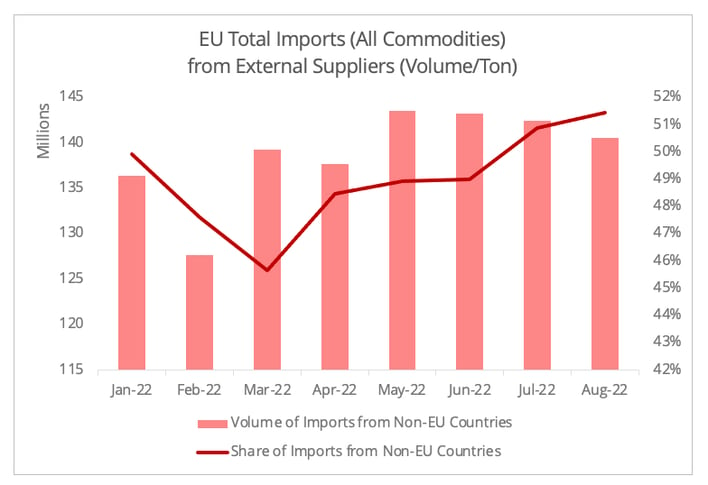 Similarly, although German imports from EU and non-EU suppliers have slipped since May, the receding volume for the latter presented a flatter curve than seen earlier in the year (Figure 5). 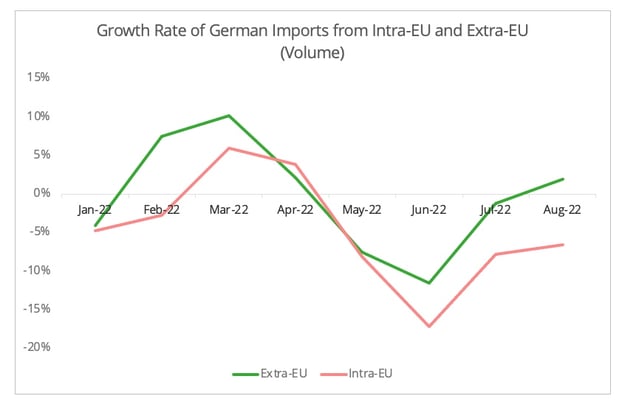 For two of the above mentioned three industries; chemicals, and iron and steel, the share of third-country supply in the EU’s total demand is also showing gradual recovery, albeit a modest one. For example, European Steel Association (Eurofer) has predicted a contracted demand of 3.5% in 2022 and 1.9% in 2023. In contrast to domestic supply, which fell in both the first and, more importantly, in the second quarter of 2022, imports rose sharply in the first quarter (+28.5%) and moderately in the second quarter (+1.6%). This evolution brings the import penetration rate in this sector to a historically high level.

[1] The top 10 commodities by trade volume and trade value can often differ to some degree. However, in EU-Russia trade, the top 10 commodities by volume and value term are largely convergent. The two-digit HS codes are as follows, Chemical Industry: 28, 29, and 31, Wood sector: 44, and Iron and Steel: 72. In the absence of more specific clarification, the statistics of the three industries in this article will be based on the data from the abovementioned HS codes.