Diversifying sourcing with additional manufacturing sites outside of China has become a top priority for the supply chain industry, even more so due to the pandemic. However, the degree of diversification is quite different between the US and the EU.

The pandemic has undoubtedly favored the emergence of the concept “China+1” in the global supply chain, described as diversifying the supply chain with additional manufacturing sites outside of China. This article will deliver a snapshot of the diversification patterns in both Europe and the US.

While the top ten goods by volume (tons) imported by the EU and the US from China are rather similar (figure 1 and figure 2), the degree of diversification is quite different.

In the US case, trade diversion due to the additional tariffs imposed on Chinese products is significant in their top ten export categories. Only three categories show an increase, and the rise in the category of "other textile products" (HS code 63) is associated with US imports of personal protection equipment due to the pandemic.

The diversification is much less significant in the EU. At first glance, comparing the first semesters of 2017 and 2020, there seems to be a higher European reliance on Chinese supply, instead of diversification (figure 2). Among the top ten categories, eight obtained an increased share of the EU’s total imports, both intra and extra-EU. The loss in Chinese supply for the iron and steel sector resulted from the anti-dumping measures imposed by the EU on Chinese manufactured steel products, which means Turkey takes first place among the suppliers of flat-rolled steel to Europe.

Which sectors and Where to diversify?

Despite the varying degree of diversification, the tendency is to diversify the supply chain to geographically proximate countries and Southeast Asia is prominent in both cases.

There are signs of diversification in commodities, such as glassware, ceramicware, footwear, and apparel. For the first two commodities, there is an increase in supply from India and European countries, in both cases [1]. As for footwear and apparel, they are among the first sectors to have shifted manufacturing activities outside of China to Southeast and South Asia. However, many are dependent on the Chinese supply of raw materials.

Diversification is without a doubt sector and country specific. The Southeast Asian share in US imports of electronic machinery products grew from 15% in 2017, pre-trade war period, to 29% in 2020. Diversification from China to Mexico in the automotive sector is observable. When comparing 2017 and 2020, US import volumes (metric tons) of automotive products from Mexico increased by more than one third.

By comparison to the US, there are no signs of much diversification in the machinery sector so far. However, there could be a lean towards diversification in electronic machinery goods manufacture in the future. In 2019, there was a sudden surge in intra-European supply of electronic machinery, mostly from Ireland. Chinese supply in this category dropped from 20% to 13% (figure 3) in 2019. This was also the case for extra-Europe supply, in the first semester of 2020, the share of Malaysia-made electronic integrated circuits has increased considerably from 2.6% in 2019 to 7.5% in 2020. A more extended monitoring period will be required to ascertain whether this is a long-term trend or a temporary move due to either Brexit or the pandemic. Still, the EU-Vietnam FTA that recently entered into force may also add to the diversification tendency, since Vietnam accounts for around one-third of the EU's imports of cellphones.

According to a survey by the UBS of CFOs of American companies published in August 2020, 76% of those interviewed expressed the intention of moving their plants out of China. The health care, consumer staples, and tech sectors show the highest interest in shifting production sites. In terms of localization for the shifts, apart from reshoring, Japan, Vietnam, Korea, and Taiwan would be most likely to benefit from the tendency.

In sharp contrast, according to a survey conducted by the European Chamber of Commerce in China, only 11% of the respondents considering shifting out of China, with CEE countries (27%) and Southeast Asia (22%) as the most preferable choices. Undoubtedly this situation will change as the survey was conducted prior to the pandemic. Still, the report points out that many European companies are “in China, for China”, and not merely exporting to Europe. Under these circumstances, defining the means to serve the Chinese market plays a crucial role in developing diversification strategies for these companies with presence in China. 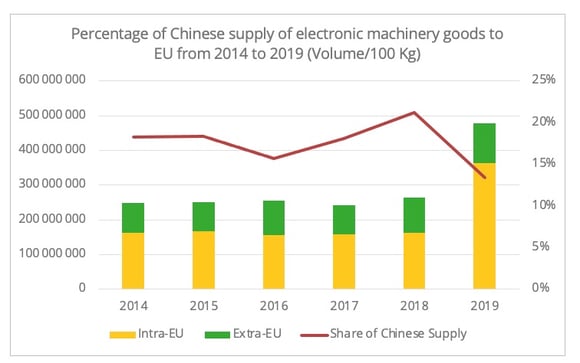 While the pandemic has given fresh impetus to the idea of "China+1", the volume of European imports from China seems to tell a somewhat different story.

On the one hand, there are rather limited alternative sourcing options in the context of pandemic containment measures. China's rapid resumption of manufacturing activity made it capable of supplying industrial intermediate products and retail goods to Europe.

On the other hand, diversifying the supply chain is both costly and time-consuming. As such, a more pronounced pattern of diversification may need a longer time to manifest itself. According to a Polish Economic Institute report earlier this year, Poland could see up to 1.87% growth of added value following the tendency of supply chain shift to CEE countries and Southeast Asia.

In the long term, apart from the desire to seek supply chain resilience, the political drive can also push for supply chain diversification in specific sectors that are of strategic importance, such as the health sector and fields essential to the EU's climate neutral goal. According to a new industrial policy issued in March, it is likely we will observe policy support for re-shoring and nearshoring to build a pan-EU supply chain in battery manufacturing, electric automobile, and pharmaceutical industries.

Supply chain diversification will, of course, affect the utilization of shipping routes. While shipping flows originating from China remain dominant in the Asia-Europe and transpacific routes, some gradual changes are observable.

Diversification, with more products coming from Southeast Asia, contributed to a more significant share of shipping flows from Asia to the West Coast, mainly to the ports of Long Beach and Los Angeles. Furthermore, it is also reported by the Wall Street Journal that there is a growth in shipments from Southeast Asia to East Coast ports. Shipping from Southeast Asia means that routes to the East Coast could also go via Europe. This tendency is most observable in the Port of Newark.

According to US cross-border transportation data, comparing the first seven months of 2020 and 2017, the volume of shipping by road from Mexico to the US increased by 32%, mostly via Port Laredo in Texas. It continues to remain resilient, with an 8% growth over the first seven months of 2020, despite the disruptions in logistics under the pandemic. There are also increased inbound ocean freight volumes from Mexico, mainly to Port Everglades in Florida and Port Newark in New Jersey.

As with the less significant diversification in Europe’s case, the change in shipping is also less apparent. As with the situation in the US, there are increased inbound shipping flows from Southeast Asian countries, particularly from Vietnam (figure 4), to the top three ports, Rotterdam, Hamburg and Antwerp. In 2019, the containerized shipping flow between Vietnam and Hamburg increased by 15% along with direct connections provided to the market. For ports located in the Mediterranean, there are also noticeable increases from Vietnam, particularly to the Port of Algeciras. Interestingly, the Port of Piraeus, which has benefited from significant Chinese investment, not only gained inward flows from China but also attracted increased inbound volumes from Vietnam. 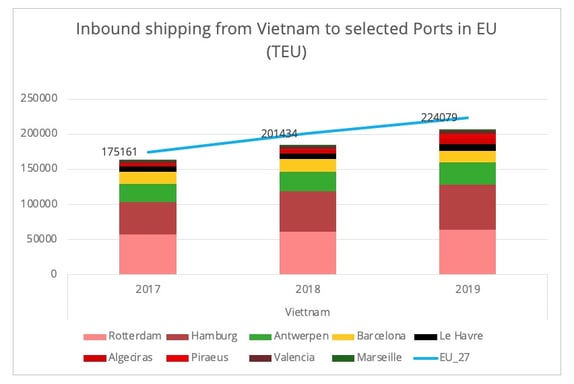 Apart from ocean freight, it may worth keeping an eye on the development of land transportation connecting Southeast Asia and Europe in the future. Railway freight between Northeast Asia and Europe has gained in popularity due to logistics that have been disrupted by the pandemic. In 2020, Vietnam Railway Corporation marked its ambition to launch an international railway freight service via China to Europe this year, though the connection remains in the planning stage and is not yet ready to accept regular shipping.

[1] US increased outsource from Southeast Asia for these categories as well.
[2] The percentage refers to China’s share of the EU’s total imports, including extra-EU and intra-EU.