The United States has published a National Freight Strategic Plan. Far from setting one transport mode against another, it sets out a vision and objectives aimed at ensuring that the freight transport system as a whole makes the country more competitive.

In September 2020, in application of the FAST Act, which was voted through in 2015 in the Obama era, the United States published a strategic plan aimed at improving freight transport efficiency. The plan was based on a simple idea. "Safe, reliable, and efficient transportation boosts exports, enhances commerce, and powers economic growth." It, therefore, represents a key element for "boosting the competitiveness of American goods abroad" but also for "lowering costs to businesses and consumers".

The investment required to ensure that the system is able to match this ambition and meet changing demand has not always been available, however. The National Freight Strategic Plan offers a diagnosis and three main strategic goals.

A transport system under strain

The plan begins with a clear diagnosis. The American transport system is under strain.

The increase in the size of the population and the growth of the economy have produced a strong rise in demand. Taking all transport modes and all kinds of products together, the American transport network currently handles 51 million tonnes of freight worth a total $52 billion every day. As in Europe, road transport is the dominant mode, both in terms of value and tonnage, particularly for distances less than 1,200 kilometres (table 1).

Between 2020 and 2040, freight demand is expected to increase on average by 1.2% per year. This growth should benefit all transport modes but more particularly road transport, where annual growth is expected to be 1.5%.

Major changes have occurred in recent years. The globalisation of logistics chains, the development of e-commerce and the concentration of the population in urban areas have substantially modified transport and delivery needs.

Globalisation has engendered a strong increase in freight volumes. Container traffic at US ports has increased 25% in 10 years and intermodal traffic has now taken over from coal as the leading source of revenue for the leading American rail freight companies, as Secretary of Transportation Elaine L. Chao pointed out when she presented the strategic plan. The ports are not the only international points of entry. The top 10 entry points comprise five ports, three airports and two land ports.

Exports and imports represented 12% of total tonnage in 2018 and 22% of the total value of freight shipments in the United States. These shares are expected to rise to 18% and 39% respectively by 2045. 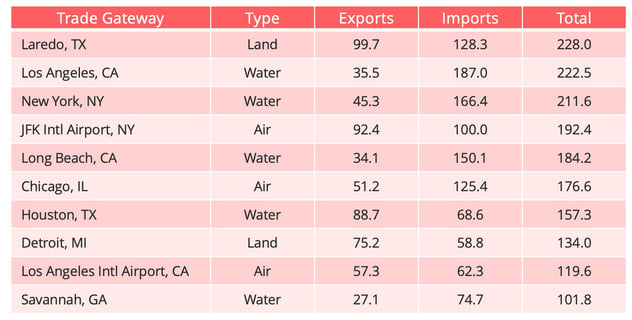 Table 3: Top 10 entry points for the entry and departure of international goods in 2018 in billions of dollars. Source: National Freight Strategic Plan

At the same time, electronic commerce has shown double-digit growth, shaking up the supply chain and increasing the number of deliveries made in already congested urban areas. Another cause for concern is that the development of e-commerce is putting increasing pressure on land close to major population centres.

Improving the collection and use of data

Innovation is an essential feature of the plan to improve the efficiency and security of the American freight transport system since it can be applied in numerous areas and has a role to play in all problem areas. The strategic plan deals with all transport modes, including drones, automated vehicles and truck platooning. It stresses the need to improve the collection and use of data and investment in research. It highlights a particularly crucial point, namely the need to adapt the workforce to the expected evolution of the sector and particularly to the use of new technology.

Improvement of the overall system involves a real plan to tackle congestion, particularly in urban areas. The costs generated by this phenomenon in net loss of productivity and unnecessary fuel consumption in the road transport sector are estimated to have come to $74.5 billion in 2018, "equal to an entire year of productivity for more than 425,000 truck drivers", according to the report. Reducing areas of congestion is therefore one of the main priorities. The Department of Transport has been given the task of identifying these areas in collaboration with the states and of coming up with solutions to improve the situation. Non-recurrent congestion, caused by extreme climatic conditions or accidents, for example, is also to receive attention.

Like Europe, the United States has suffered from a period of under-investment in infrastructure. This is a key consideration with regard to congestion. "However, over the last 15 years, public funding for infrastructure has not kept up with rising construction costs," the report notes. Another problem is that, in a period in which public spending is under strain, decisions are rarely taken in favour of freight transport. Decision-makers give priority to projects which have a direct impact in the areas for which they are responsible, whereas freight projects often produce multi-state and national benefits but, conversely, have a negative impact at the very local level. These factors hardly plead in their favour. The government has therefore begun a reform of infrastructure financing. One programme provides for financial aid for states in return for the elaboration of strategic plans for freight which improve the efficiency of the wider system. Additionally, attention will be given to better data access. "Public agencies often lack access to timely, consistent, and actionable freight data that could help them justify putting a greater emphasis on freight projects," the plan says, adding, "Because data on the cost of shipping goods is not well understood, it is difficult for policymakers to integrate the cost of product transportation for businesses and consumers into transportation programming and policy decisions."

Finally, with regard to security, the American government wants to tackle the major problem posed by the growing number of deaths in accidents involving freight transport. These increased by 24% between 2010 and 2017. The number of fatal accidents involving heavy goods vehicles increased 42% between 2009 and 2017 after falling 34% between 2005 and 2009. The American government wants, among other things, to develop secure parking places, which are often lacking along major freight routes in metropolitan areas, with the aim of ensuring that rest periods are taken in the best possible conditions.

As can be seen, the findings and challenges referred to in the American national strategic plan are very similar to those encountered in Europe. The efficiency of the remedies proposed will only be able to be measured over time as it becomes possible to evaluate the extent to which the recommendations have really been applied or not on the ground. The fact remains nevertheless that the plan's global approach, which involves making freight transport a national priority, reflects a salutary realisation of the importance of the sector for the economy. In Europe, the strategic role played by freight transport is of course acknowledged but action plans are generally based on an approach by transport mode which sometimes damages the cohesion and fluidity of the system as a whole.