Things are hotting up before Brexit

As of January 31, 2020, the United Kingdom was no longer part of the European Union but a transition period has frozen the effects until the end of the year. However, the first tensions have appeared in the organization of transportation and supply chains.

The European Commission and the British government have until December 31st to negotiate a treaty that defines their future relations. Differences remain in three areas: fisheries, competition and dispute resolution. It is above all a political problem, because London is preparing a bill on the domestic market as a means to prevent the signing of a bad agreement with Europe. This bill, with its clauses relating to Northern Ireland, is already being called into question in terms of international law. In addition, Scotland is calling out for closer ties with Europe; a major issue given the offshore oil reserves. The global challenge for Europe is the protection of the single market rules in the long term for its 450 million consumers. The European vision and British sovereignty clash on a political level, but there are already significant financial and economic impacts. The British Pound has fallen by nearly 8% against the Euro since the start of the year. On the other hand, the United Kingdom is facing a real risk of economic paralysis, as congestion worsens in British ports.

For several weeks, UK ports have been saturated, causing delivery delays. This congestion phenomenon can largely be explained by a period of strong activity in the run up to the consumer peak during the end of the year holidays, but also by an increase in stocks in anticipation of a rise in customs taxes. Shipping companies are finding it increasingly difficult to provide service to the ports of Felixstowe or Southampton. New surcharges are being implemented, amounting to an average of $150 per TEU for containers from Asia.

The retail sector is starting to be affected with a risk of supply disruption and the automotive industry, which is adept at implementing “zero stock” management, is being severely penalized. Honda has announced a temporary shutdown of its car production site in Swindon, due to a shortage of spare parts and insufficient stock of raw materials.

The freeway network is completely saturated around Channel crossing points. According to the prefecture, 9,000 trucks per day are crossing the Channel in both directions, compared the the usual 6,000.

In the new year, new customs formalities will be implemented and they may create further delays in transportation times. "The traffic management plan falls short of the issues at stake and we have not yet seen Brexit implemented, this does not bode well!", is the concern aired by Sébastien Rivéra, secretary general of the Pas-de-Calais section of the National Federation of Road Transportation (FNTR), in an interview with AFP. The English response, for the moment, is to build thousands of square meters of car parks in Kent in order to reduce these traffic jams, which is not to the liking of local residents.

If Britain leaves Europe without a deal, the basic rules of the World Trade Organization (WTO) will apply by default. The short-term risk is the creation of disruption in the supply chain and price inflation for the end consumer. On the other hand, signs of hope in the medium term can be seen thanks to the reciprocal agreements on customs taxes between states, a massive investment in border infrastructure and digital customs clearance solutions that could facilitate the day-to-day work of carriers and forwarders.

Based on Upply's price data, there has been a general increase in sea and air freight prices to the United Kingdom. The disorganization of services caused by the Covid-19 pandemic has a significant impact on this development, but the context of Brexit is further exacerbating the phenomenon. There has been an increase in transit times and and signs of mass stockpiling before the end of the year. From September to December, the increase in the contractual and spot price mix for air freight from Hong Kong, for example, reached 23%.

In the area of maritime freight, a study of price dispersion gives us a variation of 137% between the minimum at the beginning of September and the maximum at the beginning of December, based on a container journey between Shanghai and Felixstowe. However, the situation is even more complex from an operational point of view since the congestion in British ports is so severe that only premium services can pass through and several shipping companies no longer directly serve this destination. 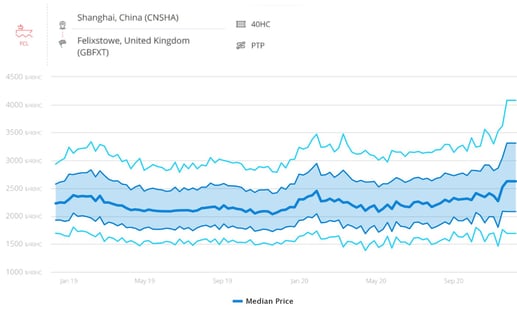 In road transportation, however, prices remain fairly stable, despite the growing traffic jams and the downward-oriented profitability forecasts due to operational constraints. This situation could not continue in the event of a hard Brexit.

If the saturation of UK infrastructure persists, air transportation could be the last resort for high value-added light freight.

Britain's largest trading partner is the European Union which accounts for 47% of its trade, and within the EU its most important partner is Germany. According to OECD forecasts, a no-deal exit would have the impact of reducing UK exports by almost 40% in the engine and vehicle sector, by 30% for textiles and metals, and by 20% for capital goods and consumer goods. In total, this would reduce the country's GDP by 2%, according to analysis by the UK's Office for Budget Responsibility (OBR). Britain is already in a complex situation due to the context of a health crisis. The country will be borrowing 448 billion euros for the 2020/2021 fiscal year and its budget deficit will reach a record high since the Second World War.

A no-deal exit from the European Union poses a major economic risk to the UK in the context of a health crisis. The solutions to emerge from the economic recession would then be based on massive investment, a relocation of the means of production and an economic recovery of the country. The strength of the United Kingdom lies in its ability to rely on Commonwealth countries, full control of its taxation and the ability to sign free trade agreements, particularly with the American ally.