Following the conclusion of a first significant pre-Brexit bilateral agreement between Britain and Japan, we look this week at the freight rate trend on the Tokyo-Southampton line.

With freight rates steady at a high level, although slightly down these last weeks, our Upply data for 40' containers transported port to port, THC included, shows a trend fairly similar to the general one between Asia and Europe. The Tokyo-Southampton line is going to feel the effects, however, of the first significant post-Brexit bilateral agreement which has been concluded between Britain and Japan. 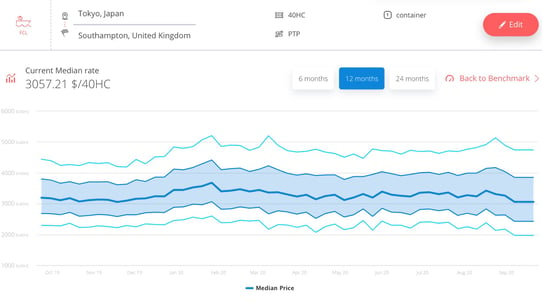 Through this agreement, which will remove 99% of customs duties, the two countries expect to see some £15bn (€16.4bn) worth of additional trade generated between them each year. Most importantly, however, this free trade agreement represents the first tangible post-Brexit economic victory of the Johnson government. It consolidates an existing partnership with Japan, which had been somewhat strained as the absence of visibility over the last two years slowed Japanese investment in the United Kingdom, particularly in the automobile sector.

The Alliance's Loop 1, which is the only direct high-quality service between the UK and Japan, will thus be reinforced. This will need to be followed closely by the French port of Le Havre, particularly, since, with or without Brexit, the European head office of The Alliance is still in London, demonstrating the closely entwined maritime vision of these two island nations.

Japanese automobile manufacturers are going to enjoy what amounts to virtually a second domestic market, without having to modify their vehicles, moreover, since steering wheels in the UK are on the same side as those in Japan!

The two partners will also enjoy preferential access to agri-food products. The spirits market, in particular, can look forward to interesting developments, since Japan has become in a major producer of quality whiskies in its own right. Thanks to Pernod Ricard group, which owns a large number of Scottish and Irish spirits brands, the French are going to be among the main indirect beneficiaries of the agreement.

Via the principle of transitivity, Japan will finally get easier access to goods produced by its Asia-Pacific near neighbours, New Zealand and Australia.

Message to US big brother

Most importantly, the agreement puts pressure on the United States to sign a new trans-Atlantic agreement. Talks on the agreement have been marking time despite the enthusiastic declarations made by Donald Trump and Boris Johnson at the G7 meeting in Biarritz in August 2019.

"Make the UK great again"…This will probably be harder than expected, given the internal opposition, European anger and the lukewarm attitude of the United States.