Truck registrations: a fall accelerated by the crisis

Registration of commercial trucks fell by 26.5% in Europe and 25.4% in France, according to figures published by the OVI (Observatoire du véhicule industriel or Commercial Truck Observatory). The crisis created by the Covid-19 pandemic has greatly amplified the expected "natural decline".

In 2019, the European market for registrations of commercial trucks over 3.5 tonnes had finally returned to pre-2008 crisis levels, crossing the 400,000-unit mark. “As expected, it took ten years to recover. This decade, which began somewhat painfully, ended with a peak in the cycle," noted Jean-Michel Mercier, director of BNP Paribas Rental Solutions' Observatoire du véhicule industriel (OVI).

A year later, a new crisis struck that no one had anticipated. The expected decline on the European market has turned into a real plunge. Over 12 rolling months, at the end of October 2020, registrations were down by 26.5% to 293,425 units, returning to a level close to that of 2014. “However, given the extraordinary nature of this period, the Commercial truck market is not doing so badly. The worst has been avoided,” said Jean-Michel Mercier.

A situation that varies between countries

The segment of commercial trucks over 16t is the one that is suffering the most. The situation also varies from country to country. Seriously affected by the fall in intra-European traffic, the market plummeted by 38.2% in Eastern Europe, with a total of 45,593 registrations, while the countries of Western Europe limited the decrease to -23,9%. 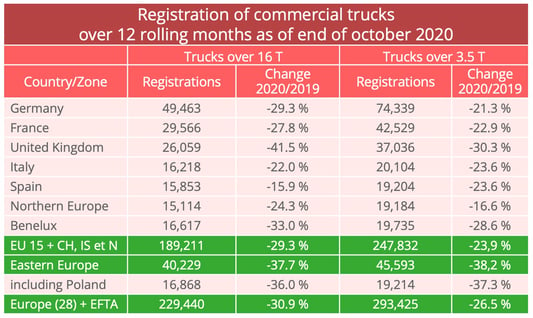 “The German, French and Benelux situations are quite similar. Their decreases in registrations in 2020 at the end of October are respectively 21%, 23% and 28%, which remains a relatively limited decline given the context with an end-of-year period which should make 2020 a very mediocre year, but much better than in 2009-2010”, notes the OVI.

At first glance, Spain and Italy have followed a similar trend with a decline of 23.6% each. “But they are still nowhere near the number of registrations they were carrying out before 2008, which illustrates the economic difficulties experienced by these two countries. For Spain, it is probably the strong competition with the countries of Central and Eastern Europe on international traffic which is at issue,” analyzes the OVI.

Shaken by multiple sources of uncertainty, with a particularly catastrophic health situation and Brexit looming, the United Kingdom holds the record for the decline among the countries of Western Europe.

Zoom on the French market

In France, while the number of commercial truck registrations reached 42,529 over 12 rolling months at the end of October, it fell to 41,632 units over twelve rolling months at the end of November, "which places it at the level of registrations recorded in 2015, but below the average of the last 20 years which is 48,000 registrations per year”, specifies the OVI. This represents an overall fall of 24.6% but is much more marked for new vehicles than for used vehicles.

The decline is of course linked to the economic crisis caused by the pandemic, but also to an expected erosion after several years of significant growth. Last year, in its 2020 forecasts drawn up before the Covid-19 crisis, the OVI had indeed predicted a decline of around 10%.

The tractor market was particularly hard hit by the decline, falling by 33.4% to 20,652 units at the end of November. “The decline was especially noticeable in the first half of the year, with a fall of 48% as the first lockdown from March to May put a stop to most logistical activity in France. The following five months showed a real recovery thanks to the resumption of deliveries”, details the OVI. The trailer and semi-trailer market held up somewhat better (-18.8% to 23,329 units).

At the same time, rigid lorries have fallen by -15.1% over the last eleven months with 20,980 registrations. This is, according to the OVI, a “good performance” given the context. "It is also the first time since 2009 that the number of registered container trailers is greater than that of tractors, the latter being much more sensitive to variations in the economy", specifies the OVI.

A modest recovery expected in 2021

How will the market for commercial truck registrations behave in 2021? "Many questions remain", underlined Jean-Michel Mercier, director of the OVI, during the presentation of the annual market study. There is a risk that the health context will cause an alternation of “stop & go” for some time to come, which does not provide good visibility on the possibilities for a recovery. Also, the large-scale fiscal and financial support measures which have made it possible to keep the economy afloat and limit the decline in investments in 2020 could be reduced.

In road transportation in particular, there is a significant risk of business failures. “The weight of empty miles is one of the major on-going concerns. This is also a key point identified in the latest FNTR surveys, as 38% of companies are recording additional empty miles. Restoring loaded-travel rates will therefore be a crucial issue”. By facilitating the connection between supply and demand, digital platforms such as Upply can provide significant help in this area.

Given the uncertainties weighing on the sector, the OVI forecasts a growth of 1% in 2021 with around 42,000 registrations, and a return to normal in 2022. In detail, we should see a slight recovery of 2% in the tractor market, which would thus reach 21,300 registrations, and a stable market of container trailers of around 20,700 units.

“If a higher level of recovery seems possible, towards a level closer to 45,000 units, the key factors for a significant recovery would be: purchases of large fleets, particularly of tractors, the health situation and the time taken for orders to rebound in early 2021, depending on the evolution of the health crisis”, concludes the OVI.