Let's have a look this week at ocean freight rates between Ho Chi Minh City and Hong Kong. Our data base at Upply shows that there has been a slight increase in recent weeks in rates for 40' high cube containers.

In Europe, this intra-Asian route is often viewed in terms of Chinese exports to Vietnam. There are two main factors behind traffic flows in this respect:

It would be wrong to see things only in this way, however. Vietnamese exports to China are also on a good trend, principally for agri-food products, natural rubber (which remains a basic component in China's new tyre industry), some kinds of textiles and, above all, basketball-style sports shoes (which are worn increasingly by all strands of the population worldwide, including in China).

It is indisputable that the Chinese and Vietnamese economies are increasingly inter-connected even though the political climate between the two countries remains tense. The cause of the tension is China's claim to have access to maritime zones and sub-sea resources all along Vietnam's east coast.

At this stage, we are seeing no reduction in volumes to Hong Kong despite the extreme political tension between the semi-autonomous state and the Chinese state. 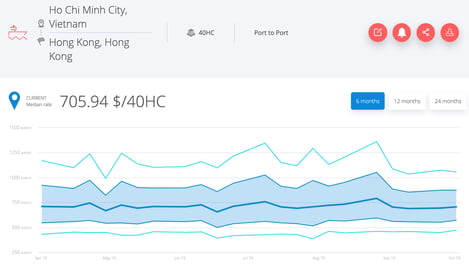