AdBlue: a vital supply for transporters

AdBlue, an additive used in road transport to reduce nitrogen oxide emissions, is not immune to inflationary pressures. But beyond the price, it is the risk of shortages that worries road carriers today.

AdBlue is a liquid that captures the fine particles of nitrogen oxide (NOx). This additive, also called Diesel Exhaust Fluid or AUS32, is used for diesel engines fitted with SCR catalytic converters. It reduces emissions of fine particles into the atmosphere by 85%. Well known to road hauliers, this additive has become strategic because some engines simply cannot run without AdBlue. For a truck, the average consumption of AdBlue is 4 to 5 litres per 100 litres of diesel used.

This additive has been adopted internationally by car manufacturers. In Europe, the transition from the Euro 5 to Euro 6 standard in 2014 for trucks, imposed a reduction of maximum values by 80% for nitrogen oxides, 72% for hydrocarbons and 50% for particles. Technological advances based on lower fuel consumption and the treatment of exhaust gases with a catalytic converter equipped with SCR (Selective Catalytic Reduction) technology associated with the use of AdBlue have made it possible to significantly reduce emissions of pollutants. Today the majority of new vehicles with diesel-powered engins, be they cars, buses, agricultural tractors, construction machinery, and trucks, are equipped with an AdBlue tank. In other words, a prolonged shortage could damage the entire economy.

A sharp rise in prices

The manufacture of this additive requires the production of ammonia which itself requires a large consumption of natural gas (methane) in the production process. But the V-shaped economic recovery is leading to an acceleration in the consumption of goods and a strong inflationary trend. Methane has been particularly affected: its price has increased by 102% since the beginning of the year.

There is another method of manufacturing this additive by the dilution of urea granules. This product is also used as a fertilizer in the agricultural world. As a result, the evolution of its price has followed the surge in the prices of agricultural raw materials since the beginning of the year. Since October 2021, the increase is out of control because China has decreed a rise in tariffs and, like Russia, has put in place export restrictions to cope with the growth of the domestic market. China concentrates 16% of global urea exports and Russia 9%. As a result, the price of urea on the financial markets increased by 46% between September and October 2021. In comparison, Brent crude oil experienced more moderate growth, with an increase of 12% over the period. 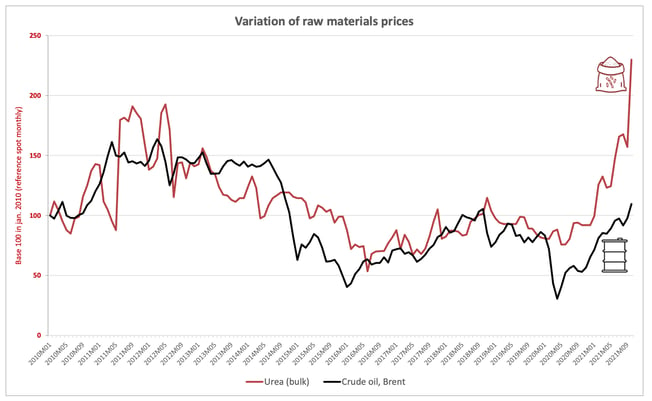 A drop in production

This price increase is obviously a matter of concern for carriers, who are already dealing with inflationary trends on all fronts. But the main danger is not here. Indeed, the impact of the price of Adblue remains relatively marginal. In France, for example, the CNR estimates that the cost of this additive represents on average only 0.3% to 0.5% of the annual cost of a vehicle. On the other hand, the threat to the availability of the product is much more dangerous.

AdBlue is a registered trademark of the German Association of the Automotive Industry (Verband der Automobilindustrie - VDA) and the audited quality production licenses are held by around 200 petrochemical and automotive companies globally. Faced with the increase in the price of methane and urea, companies in the chemical sector are suffering from soaring input costs, which threatens the economic profitability of AdBlue production. In Europe, the Norwegian company Yara International announced in mid-September a 40% reduction in its ammonia production because of the record rise in the price of natural gas. In the third quarter of 2021, the EBITDA of its industrial product line decreased by 33% compared to the third quarter of 2020.

BASF, the German world leader in chemicals, announced at the end of September a temporary shutdown of its ammonia production for lack of sufficient margins. Germany's SKW Piesteritz, Britain's CF Industries Holdings, Spain's Fertiberia, Austrian's Borealis, and Slovakia's Duslo have also decided to suspend or reduce their production. So, we are not dealing with an issue concerning the means of production but a consequence of inflationary pressures which are pushing to reduce production in order to preserve financial margins.

A real threat to the fluidity of supply chains

Beyond the price, the AdBlue shortage currently poses a risk to the economic recovery. If supply disruption occurs, then trucks will remain in the parking lot, further clogging a little more the already disrupted supply chains, while the sector is already suffering from a serious shortage of drivers.

In Europe, the situation is under control. But the example of Korea is a good illustration of the dangers. The country imported 97.6% of its urea needs from China in the first nine months of the year, but China is now restricting its exports and stocks are empty in Korea. The government intervened by announcing rationing and purchase restrictions resulting in an endless line of professional and private vehicles awaiting their distribution of AdBlue. In 2020, Korea imported 80,000 tonnes of urea needed to produce 240 million litres of AdBlue and overall the country consumes 600,000 litres of AdBlue per day.

Supply must be secured

This spectacular shortage, associated with a surge in prices, shows that it is a strategic necessity to secure the supply of AdBlue and to think about alternatives in order to deal with a major risk of disruption such as the one facing Korea. The major players in the road transport, logistics, automobile, and chemical sectors have every interest in seeking coordinated responses, in conjunction with the public authorities.

In Slovenia, the government has already ordered 500,000 litres of AdBlue to secure the supply for road carriers in the country. In Germany, the public authorities have intervened to organise a consultation between the road transport and logistics stakeholders and the chemists producing AdBlue in order to guarantee a minimum supply. In France, the ministry has yet to take a position on this issue.

In the longer term, in order to avoid a paralysis of the economy, the constitution of strategic stocks at a national level could be an unavoidable solution. Beyond the players in the chemicals sector, the major oil players such as BP, ENI, Shell, and Total already have the industrial capacity for the production of AdBlue and they often possess a worldwide license. Therefore, the petrochemical industry as a whole could provide quick solutions to avoid any shortages. The public authorities could encourage the constitution of strategic reserves at a national level through appropriate taxation measures.

At the end of the year, the issue of AdBlue serves as a reminder of how acutely the question of the strategic independence and reindustrialisation of Europe is posed. An ambition driven by the European Commission through the update of the industrial strategy of the European Union.