International transport prices are continuing to rise in both the aviation and container shipping sectors. As the uncertainty over public health continues all over the world, the balance of power clearly does not favour shippers.

The Covid-19 epidemic and the political decisions to contain the pandemic have created a turnabout of unprecedented severity on the international freight transport market. Since April, freight rates have stayed at high levels and access to capacity sometimes turns out to be problematic.

The container shipping market has remained under pressure in recent weeks. The upward price trend registered in the first edition of the Upply International Transport Barometer has been confirmed and port calls have continued to be cancelled. The shipping companies have maintained their strict capacity management policy, while, at the same time, unilaterally increasing rates and surcharges. Taken together, these peak season and port congestion surcharges and the cost of the premium services the companies have been proposing for guaranteed loading of goods have taken container shipping prices to an all-time record. 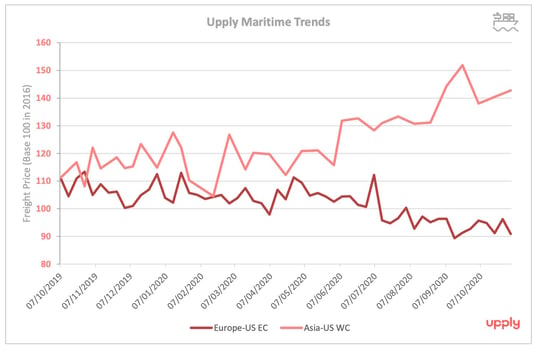 Example of ocean freight rates' evolution between Europe and the US East Coast and between Asia and the US West Coast - Source : Upply

Spot Shanghai to Europe import prices are at their highest level for six years at $1644/TEU and global index prices are on average 133% up on last year.

On the transpacific market, strict capacity management on the part of the shipping companies has combined with strong American consumption. As a result, prices are very high. According to the Upply data base, the increase in the spot and regular line price average between February and October was 45%. On transatlantic lines, on the other hand, transport capacity is stable, allowing prices to descend after the post-lockdown peak. The situation could become tighter, however, as a result of the EU's planned implementation of a $4 billion increase in customs duties on imported American products following a recent World Trade Organisation ruling in the EU's dispute with the US over the payment of subsidies to Boeing.

In the meantime, extreme price volatility and performance differences are creating operational imbalances, most notably in the form of a shortage of empty containers. In the United States, the Federal Maritime Commission (FMC) has been alerted by American shippers, who suspect that some shipping companies are refusing to load some full containers for export so as to be able to reposition the empty containers in Asia.

Our Upply data base shows how air freight prices have increased strongly since the start of the coronavirus crisis. In the transatlantic market, the increase in the contract-spot price average between March and June 2020 stood at 89.3%. On the Asia to Europe export market, however, prices increased 15% between July and October and the trend is likely to continue. The market is moving into peak season mode, driven by strong growth in e-commerce. This year, moreover, the Asian high tech sector could boost demand further via the launches of the iPhone 12 and Playstation 5.

“According to latest forecasts from IATA, the airlines cargo revenues should reach a total of $117.7 billion in 2020, compared to $102.4 billion in 2019. An increase of about 30% in revenue per item has made up for the fall in tonnage (expected to fall from 61.3 million tonnes in 2019 to 54.3 million tonnes in 2020). Freight’s share of global airline activity will this year increase from 12% to 36%. IATA is optimistic, moreover, about the development of cargo activity in 2021. Volumes should increase to 61.2 million tonnes, driven by the need to transport vaccines. At the same time, prices should continue to increase by virtue of the continued disruption to passenger flight programmes. . IATA expects them to increase by 5%, which would take world air freight revenues to a record $139.8 billion.”

The exponential growth in freight rate is the result of a shortage of demand but also dynamic consumer demand and a recovery in economic activity in the third quarter. The October Purchasing Managers' Index shows a 10.6% increase over October 2019 in the United States and a 6.3% increase in China. In Europe, the quarterly trend is positive but the longer term trend is downward following the introduction of new lockdowns.

The composite PMI takes account of the manufacturing and services sectors, whereas the BCI is an indicator of business confidence. A green dot in the PMI section indicates a quarterly average of more than 50, which represents an increase in the activity of purchasing managers in the industrial and services sectors. A green dot in the business climate section represents an index of more than 100, which suggests that there was an increase in short-term business confidence – Data sources: Markit, Eurostat, OCDE

World consumption remains high and seasonal factors are keeping international transport prices at high levels. China's Golden Week at the start of October reduced freight capacity and ship availability. The approach of Black Friday also generated some advance stocking on the part of retailers in the United States and Europe who were looking to avoid suffering a break in the supply chain of the kind which occurred in the first half of 2020.

Private sector when demand is also recovering as was proved by the sales record reached on China's Singles' Day when e-commerce platform Alibaba sold $74bn worth of goods.

Public sector demand is being nurtured by the need for supplies of health protection products in countries in short supply as they seek to prepare for the risk of a new wave of the epidemic. In the first half of 2020, China exported $40bn worth of surgical masks.

The World Trade Organisation has revised its forecasts upwards. It now sees world trade volumes declining 9.3% in 2020 compared to the 12.9% decline it forecast in April. Most importantly, however, it sees trade growing 7.2% in 2021.

Restrictive measures on economic activity have created sectoral and geographical disparities. Several years will be necessary for pre-crisis activity levels to be restored in the aviation, hotel and automobile industries. Other sectors, on the other hand, have already returned to growth, among them the pharmaceutical and paramedical sectors, e-commerce, and the high-tech and semiconductor businesses.

Localised measures can also be a fundamental factor in economic recovery. This is the case in Asia, where, on 15 November, a free trade agreement was signed between Asian and Pacific countries. This Regional Comprehensive Economic Partnership (RCEP) has become the world's biggest ever trade agreement, covering as it does 30% of the world population. It applies to more than two billion people and brings together for the first time China, Japan, South Korea, Australia and New Zealand with the ASEAN countries (Thailand, Singapore, Malaysia, the Philippines, Vietnam, Myanmar, Cambodia, Laos and Brunei).