Global demand for air freight fell 4.3% in the first half of 2022, compared to the same period in 2021. It is still above pre-pandemic levels but the economic outlook is not very favourable.

The end of lockdowns in China had a positive impact on global freight activity in the month of June. According to figures from the International Air Transport Association (IATA), traffic was still down on 2021 but, in June, the fall was reduced to 6.4%, after 8.3% in May. Corrected for seasonal variations, freight volume in tonne-kilometres showed a 0.7% recovery in June, compared to a more modest 0.3% increase in May, after three months of decline. 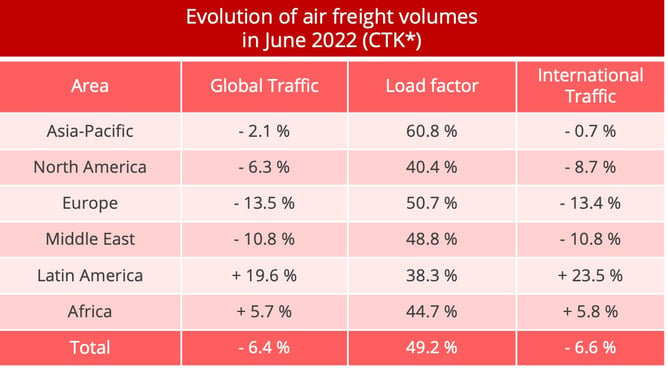 Over the first half as a whole, global freight traffic was 4.3% down on 2021. The three main world markets all recorded negative results, with reductions of 2.7% in Asia-Pacific, 3.3% in North America and 7.8% in Europe. By comparison with 2019, the pre-pandemic reference year, however, first half traffic volumes were up 2.2%. "That’s a strong performance, particularly considering continuing supply chain constraints and the loss of capacity due to the war in Ukraine. Current economic uncertainties have had little impact on demand for air cargo, but developments will need to be closely monitored in the second half,” said Willie Walsh, IATA’s Director General. 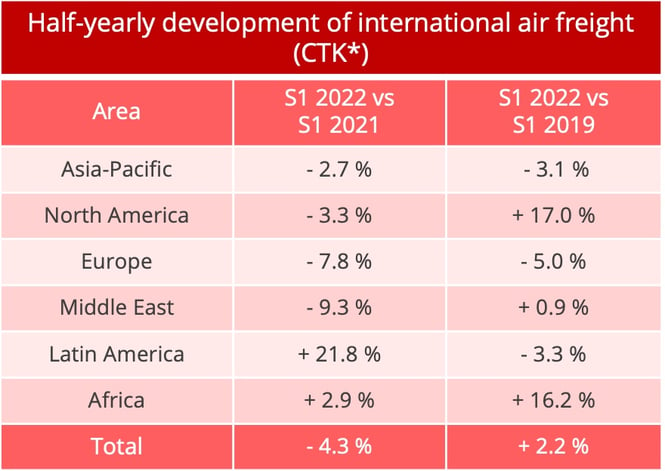 Growth in the first half was driven by the North American airlines (+17%). African companies also registered strong growth at 16.2% but it should be remembered that they represent only 1.9% of the global market, compared to 27.2% for their North American counterparts. Conversely, the Asia-Pacific region and Europe were still below their pre-pandemic levels, with reductions of 3.1% and 5% respectively compared to the first half of 2019, while Middle East transporters had to settle for a modest increase of 0.9%. Finally, despite a marked recovery in recent months, Latin American airlines were still lagging 3.3% behind their pre-pandemic level.

The improvement at the end of the first half was too fragile to fully restore confidence. "It is too soon to call a recovery," IATA said. Ongoing relaxation of COVID-19 restrictions in China, including factory reopenings, should support the recovery in world trade in the months to come but contrary forces are also at work.

The reduction in demand has occurred as capacity has increased. With a strong tourist season on the way, the airlines increased their passenger flight programmes, which automatically brought new cargo capacity onto the market. Overall, capacity increased 6.7% in June 2022 year on year, which represents a much higher increase than the 2.7% increase registered in May. In the first six months, capacity increased 4.5% compared to the first half of 2021 and 5.7% in the international sector alone.

As a result of the difference between capacity and demand growth, the load factor dropped back to under 50% for the first time since the start of 2020. In June, it stood at 49,2 %, which is to say 6.9 points less than a year ago, while, over the first half as a whole, it was 5.2 points down at 52,6%. Despite this fall, the load factor was still above pre-pandemic levels, which stood at 45.4% in June 2019 and averaged 46.3% for the whole of2019. The Asia-Pacific region traditionally registers the highest load factors and 2022 was no exception. The region's 60.8% load factor was 10 points higher than that of the second best performing region, Europe, which registered a load factor of 50.7%. It is true, however, that Europe has seen its load factor drop 11.2 points over the last 12 months.

The end of the upsurge in freight rates

Air freight rates remain markedly higher than they were last year and even further ahead of their pre-pandemic level.

But the period of strong growth is well and truly over. The slowdown is particularly marked in North America, where falling demand caused by inflation has been compounded by the restoration of capacity available in the holds of passenger aircraft to put prices under downward pressure. On flights in and out of Asia, there is still sufficient demand to maintain a growth trend on certain routes but the Asia-Europe corridor is also experiencing a slowdown. Rates remains very volatile. They are driven up and down by China's Zero Covid policy, which can leader to sharp variations in supply and demand levels. 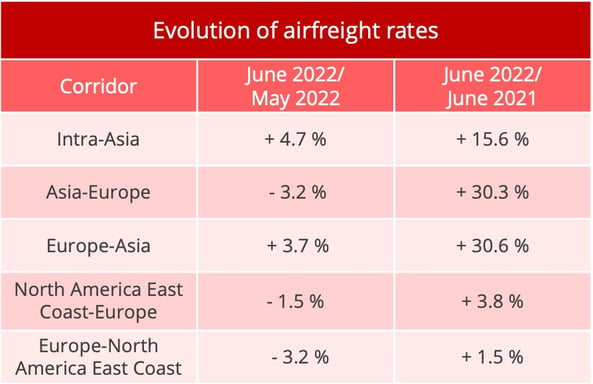