Air freight: a reduction in traffic in appearance only

The November global air freight traffic figures published by IATA show a slight fall in traffic volume. This was mainly caused, however, by the exceptional traffic levels recorded in November 2019 when the US and China were in the middle of a trade war.

The steady recovery experienced by the air freight industry since May 2020 came to a standstill in November. According to the figures from the International Air Transport Association (IATA), global air freight traffic expressed in tonne-kilometres fell 6.6% in November year-on-year, whereas the difference was only 6.2% in October. 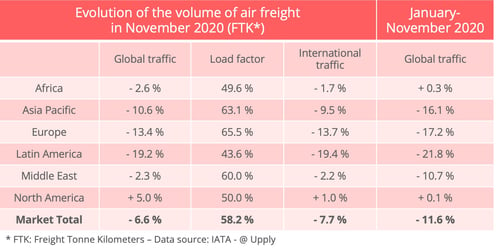 Should this be seen as a relapse, as the second wave of Covid-19 began to make itself felt, bringing new lockdowns in many places? IATA thinks not, arguing that the greater reduction in traffic was rather due to the exceptional situation in November 2019. At the time, demand was stimulated by the China-US trade war and the prospect of additional customs duties being applied to certain products. "In seasonally adjusted terms however," IATA said, "CTKs (cargo tonne-kilometres) grew by 1.6% month-on-month, continuing the increases seen since the April low point. Current monthly gains point to cargo volumes returning to 2019 levels around March 2021."

A continuing lack of capacity

IATA is even more reassuring for the fact that the economic ratios which are traditionally used to predict demand trends are pointing in the right direction. Global PMIs for new export orders are continuing to rise both on emerging markets and in the developed economies, and the same is true for manufacturing output indexes on most major markets.

Access to transport capacity is still problematic, on the other hand. In November, capacity in tonne-kilometres was 20% down on its November 2019 level. This was a little better than in October (-22.6%) but still insufficient to satisfy demand. Capacity aboard all-cargo aircraft increased 20% but this did not make up for the 53% reduction in capacity offered aboard passenger aircraft.

In this situation, air freight rates have stayed at high levels compared to last year. They are about 70% higher than those we saw in 2019 at the same point, according to IATA. Our Upply data base shows that the Asia-Europe and Europe-East Coast North America corridors are particularly dynamic. The peak season was longer than usual, stretching easily from October to December.

As the new year gets under way, market observers are indicating that freight rates can be expected to stay high in 2021, since  the pressure on capacity is going to continue. Taking account of the way the pandemic is progressing, passenger aircraft will only be brought back on into the market very gradually. 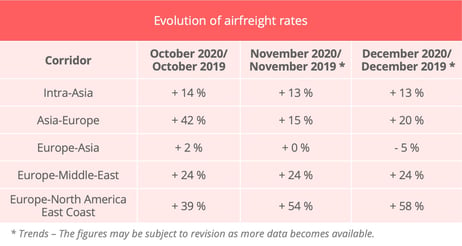 From the start of the year to the end of November, global air freight traffic fell 11.6%. Of the three major regional markets, only North America held its own. The North American airlines have enjoyed several months of recovery, which have enabled them to make good the impact of the turbulence they experienced in the spring. In November, they again registered good growth (+5%), driven mainly by the Asia-North America routes (+9.3%). The Asian airlines, which were hit hard by the first wave of the pandemic, are now showing some signs of recovery, even though there is still a major capacity shortfall. Europe, meanwhile, is still struggling and even saw international traffic decline from October to November. IATA attributes this to the introduction of new lockdowns to try to stop the spread of the second wave of the pandemic. Elsewhere, the Middle Eastern airlines saw traffic fall in November, as they suffered from a shortage of international connections. After several months of traffic growth, their African counterparts also suffered a slowdown, but the Latin American airlines are still the ones in the greatest difficulty.