The impact of the conflict in Ukraine is expected to truly be seen in March's results. Meanwhile, global air cargo traffic increased by 2.9% in February.

Global air cargo demand, expressed in tonne-kilometres, showed a further year-on-year increase in February, even though we are far from the growth rates observed at the end of 2021. According to figures from the International Air Transport Association (IATA), traffic increased by 2.9% in February 2022 compared to February 2021.

To take into account the impact of the Chinese New Year, that came earlier this year, we must look at the first two months of the year and we see an increase in demand of 2.7% year-on-year and a decrease of 1.7% compared to December 2021. For departures from Asia, it was not until the 2nd fortnight in February that dynamism returned, when activity resumed in Chinese factories after the traditional New Year's closures. 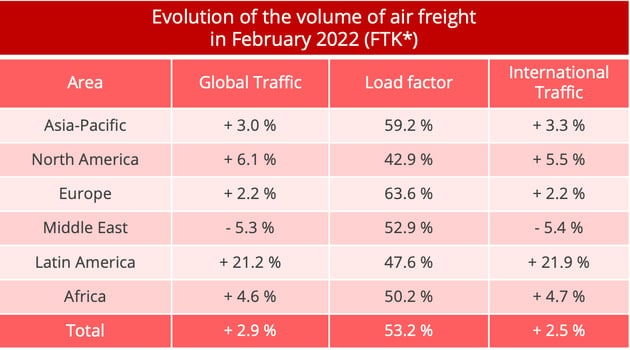 Freight rates still on the rise

The beginning of the year has therefore been rather calm on the volume front. But it is accompanied by good resilience in freight rates, especially on the intra-Asia and Asia-Europe corridors, where price levels are still much higher than last year, and even more than the pre-pandemic period.

There is also a significant rebound on the Europe-North America corridor. This can be seen as being a consequence of the difficulties that are beginning to affect maritime transport on this corridor.

East Coast ports now face a massive influx of Asian goods transiting through the Panama Canal to escape the congestion of West Coast ports. As a result, they are in turn caught up in this congestion phenomenon, and the air option may therefore become relevant for some shippers given the additional delays. 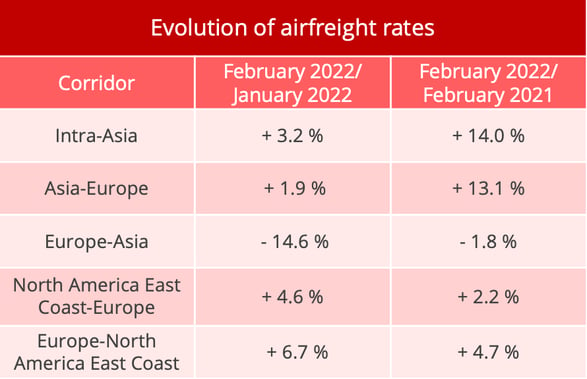 A fragile recovery in supply

This resilience in freight rates is all the more remarkable as the growth of traffic has been slower than that of capacity. In February 2022, supply increased by 12.5% year-on-year (and by 8.9% for international operations). Overall, the load factor is down 0.9 points compared to January 2022 and 4.3 points compared to February 2021.

However, "capacity remains limited compared to pre-COVID-19 levels, as it is 5.6% lower than in February 2019," reminds IATA. Internationally, supply increased by 21.4% year-on-year in February on passenger aircraft, but the all-cargo capacity remained unchanged compared to February 2021. “A relatively weak outcome that is partly due to the loss of capacity in Russia and Ukraine and to disruptions related to Omicron in Asia,” IATA estimates.

Indeed, the conflict in Ukraine, which began on 24 February, did not have a major impact on monthly volumes, but the impact on capacity was immediate. On a seasonally adjusted basis, capacity deployed on the Asia-Europe route - one of the most affected by the conflict - fell by 2% in February.

This trend is confirmed by the first figures revealed by IATA on the evolution of the situation in March: "dedicated cargo flights between Asia and Europe fell to reach at the end of March a level 17% lower than the previous year".

Clouds forming on the horizon

The air cargo industry is once again entering a period of great uncertainty.

Obviously, the air cargo industry, like the shipping industry, is highly dependent on the global economic situation and will still have to wait to see a certain degree of standardization. Customers are paying a high price for this uncertainty today.