Global demand in the air freight sector remains markedly lower than in 2019 but IATA's May traffic figures show a slight recovery. Pressure on capacity is beginning to ease, moreover, slowing down the spike in prices seen at the height of the Covid-19 crisis.

In April, the global air freight industry suffered the sharpest fall in demand in its history. In May, there were signs of a "slight recovery" even though the overall situation in air transport remained critical. According to the latest figures from the International Air Transport Association (IATA), traffic measured in tonne-kilometers fell by 20.3% in May 2020 as compared to May 2019. This is the third consecutive month in which the sector has experienced a double-digit fall in activity but the figures nevertheless showed a marked improvement compared to April. "This initial recovery partly comes on the back of stabilizing manufacturing output and new export orders," IATA said, basing its comments on changes in the Purchasing Managers' Index. "Both metrics continue to decline at the global level in month-on-month terms, but the pace of the fall has slowed significantly, as many economies have started to come out of lockdowns." 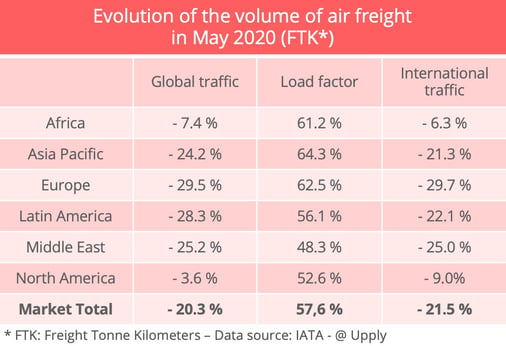 Although all regions registered a fall in air freight volumes in May, European carriers were particularly hard hit, recording the "weakest output among the regions", according to IATA. It should be said that lockdown measures in the region only started to be lifted in mid-May. North American carriers suffered the lowest fall in demand, with traffic down just 3.6% overall and 9% in the international segment. "The resilient performance is due to shorter and less stringent lockdowns in certain regions, the large freighter fleets of a few regional airlines as well as robust US-China trade volumes," IATA said. "Demand on the large Asia–North America route was down only 0.4% year-on-year in May." Companies in the Asia-Pacific region showed a clear recovery, helped by shipments of personal protection equipment but also by the recovery in the Chinese, Vietnamese and South Korean economies.

The Middle East and Latin America also saw their rates of decline slow very significantly by comparison with last year but the sanitary situation remains a source of concern. African volumes, finally, held up relatively well, thanks, notably, to the maintenance of traffic volumes between Asia and Africa, which were down only 0.4% in May.

A slight easing of pressure on capacity

The near paralysis of air traffic resulted in strong pressure on capacity at the height of the Covid-19 epidemic. Capacity supply remains tight but is getting better. Most passenger aircraft fleets were still out of action in May. Worldwide capacity in tonne-kilometers remained 34.7% down compared to 2019 (32.2% for international operations alone). The reduction in hold capacity stood at 66.4%, while the availability of capacity aboard cargo aircraft showed a 25.2% increase, according to IATA.

The balance of power remains favorable to the airlines, therefore, since the reduction in capacity is still greater than the reduction in demand. This imbalance led to a 10.4% increase in the industry-wide load factor in relation to May 2019.

Easier access to capacity also opened the way to an easing of the sharp increase in freight rates seen since April. As our Upply data shows, on the major routes, air freight rates stayed at high levels compared with last year at the same point. But there is nevertheless a clear slowdown in relation to April and even the start of a reduction on some routes. 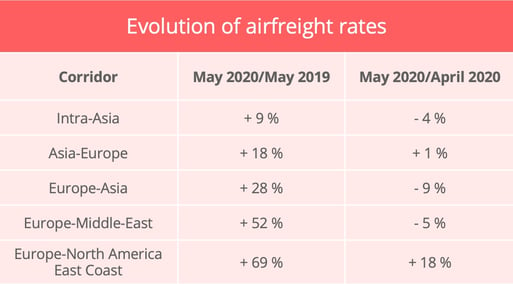 Prices "seem to have peaked around mid-May. With passenger traffic starting to return, the capacity crunch in cargo is expected to begin to unwind in the near future, thanks to the gradual resumption of passenger flights," IATA suggests in its analysis of the May figures.

On the demand side, too, a certain slowdown can be expected. Time is playing in favor of a reorganization of logistics chains. For example, the personal protection equipment, which was transported by air at sky-high prices during the period of maximum emergency in March and April, should now be able to be shipped by other means.

There remains one cause for concern, nevertheless. The return of the epidemic in some areas has led to fears that a second wave could follow and, with it, further lockdowns and border closures. The future remains extremely uncertain, therefore, regarding the continued availability of capacity. As for the organisation of logistics flows on the basis of the outlook for production and sales, they involve hypotheses which can be compromised at any moment.