The 2021 freight traffic results of the leading European airports showed a general recovery. Liège, Luxembourg and Brussels made the greatest gains over the last two years, however, along with Leipzig, Cologne and Milan.

According to preliminary data from the Airports Council International, freight traffic at European airports increased 21.8% in 2021 to finish 7.7% up on its 2019 level. Our 2021 rankings of the main airports bear witness to this growth but also show disparities in the levels of growth registered by the top 15 airports. 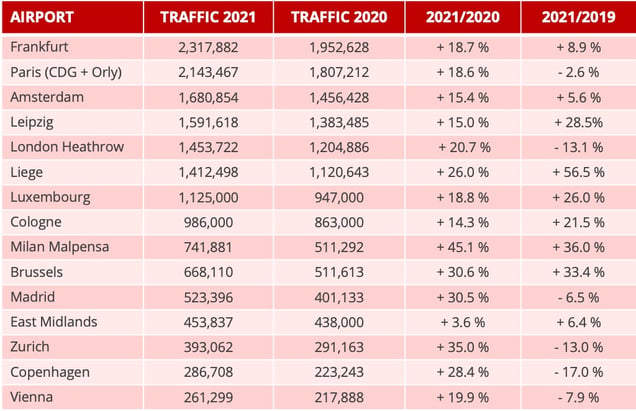 The three leading European airports remained the same. Frankfurt stayed in first place with a record 2.32 million tonnes (Mt). Second-ranking Paris, which, unlike the other airports in the top three, saw its traffic total fall in 2020, returned to growth in 2021. Paris-Charles de Gaulle airport accounted for the vast bulk of traffic with a total 2.06Mt (+18.1%). Amsterdam-Schiphol stayed in third place but its lead over Leipzig narrowed.

Leipzig apart, the airports which showed the strongest gains during the last two years are in the Benelux countries. Several airports there are reaping the benefits of a clear and determined freight traffic development strategy, which was introduced well before the pandemic.

After two years of exceptional growth, Liège is now close behind London-Heathrow. "The disruption of global supply chains and the lack of air transport capacity in the holds of passenger aircraft are trends which emerged in 2020 and which stimulated our growth in 2021," said Laurent Jossart, the Belgian's airport's chief executive. "Humanitarian equipment, the pharmaceutical sector and health care (masks, vaccines and medecines) are the main market segments."

Liège is also well-placed in another sector which is key to its future development - cross-border e-commerce, particularly with China. The line to Qingdao, which opened in November 2020, was clearly designated a new Air Silk Road. Liège wants to establish itself as a European hub through the pursuit of a multi-modal strategy, with particular emphasis on the use of on rail transport. "All Liège's rail terminals with connections to China handled 16,103 containers in 2021, nearly 70% more than in 2020," the airport said. "That represents 172,893 tonnes of imports and exports (+66%), with significant growth in full containers for export."

Brussels, Belgium's second biggest air freight platform, also benefited from its presence in the health sector. It has handled more than 800 million doses of Covid vaccine since November 2020. Brussels Airport, which co-founded the Pharma-Aero network in 2016 with Miami, handled 668,000 tonnes of freight last year, showing strong growth for a second year running. Including freight carried by truck, the total came to 843,000 tonnes.

Luxembourg Airport, which is helped by the presence of cargo specialist Cargolux, which has registered excellent results since the pandemic caused a massive reduction in capacity available in the holds of passenger aircraft, enjoyed a second consecutive year of double-figure growth in 2021. Its traffic total exceeded one million tonnes for the first time last year.

The European airports top 10 was also marked by the strong performance of Milan Malpensa, where freight traffic was 45% up on 2020 and 36% up on 2019. The Italian airport has clearly benefited from the installation of a new hub by DHL in 2020, three years after FedEx did the same. The express transport segment generated 235,000 tonnes of traffic in 2021, representing 33% of all freight traffic, compared to 15% in 2019, and an increase of 222% over two years.

Milan has, therefore, moved up a place in the rankings to put it ahead of Brussels, despite the latter's own strong performance. Both are nevertheless quite a long way behind Cologne, which registered solid growth in 2021 which could lead to its traffic exceeding one million tonnes in 2022.

Lower down in the rankings, the results were more mixed. Most airports recovered in 2021 but their results were still well below their pre-pandemic levels.

Outside the Top 15, Saragossa, Spain's biggest freight platform after Madrid, saw its traffic increase 35.3% in 2021 after a bad year in 2020. With a total of 194,353 tonnes, its traffic was 6.5% up on 2019. It has an ambitious newcomer on its tail, however. Budapest in Hungary saw its traffic increase 36.4% last year to 183,362 tonnes. It is counting on Chinese freight to help it develop its activity and aims to establish itself as a central European hub. A cooperation agreement has been concluded between with Chinese airport group Henan, which operates Zhengzhou International Airport, and Chinese-Hungarian trade and logistics development company CECZ/Utlink, with the aim of setting up an an aerial Silk Road between China and Hungary.

The pandemic also prompted Poland to revise the business model being used for its mega airport project. This platform, which is due to be built between Warsaw and Lodz, should put much greater emphasis on air freight than originally planned. Expected to open in 2021, it will also offer multimodal connections.