Asia - Europe: Mapping out the connection between Poland and China

As one of the first Central and Eastern European (CEE) countries to have joined the Belt and Road Initiative, Poland has marked its ambition to become the logistics hub connecting China and Europe. While Poland serves a critical role in the EU-China shipping connections, the Chinese investment in the Polish transport sector remains modest.

Overall, the development of Chinese logistical connections with Poland is asymmetrical, with a heavy emphasis on railway connections. Let us take an overview of these Poland-China connections:

However, under the current Chinese policy of marketization of the China-Euro railway, the potential removal of subsidies on the cost of freight from Chinese local governments would result in an increased cost of future transport via the China-Euro Railway. Considering the high proportion of the China-Europe railway going through Poland, in the post-subsidy period, a critical issue ahead of the Polish railway transport sector is whether there will be sufficient demand for railway shipping between China and Europe. 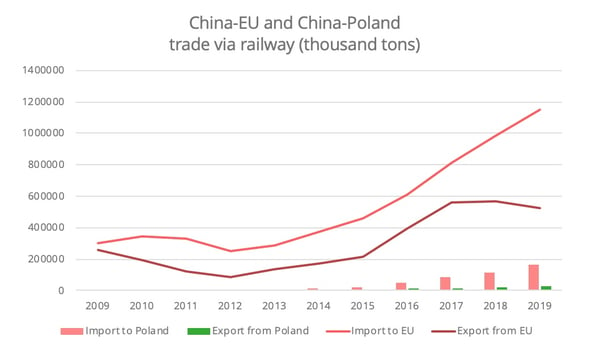 Over and beyond the railway links, China’s attention has also been drawn to Polish ports. Gdansk has been regarded as having the potential to be transformed into a logistics hub, along with Piraeus, COSCO’s flagship project in Europe, to connect East Asia and Europe, as has been suggested by the chairman of COSCO in an interview in 2016.

Currently, Gdansk has direct liner shipping connections with major Chinese ports, including Shanghai, Ningbo, Yantian and Xiamen. In 2017, COSCO established its distribution center in Gdansk and started to offer a weekly feeder service from Gdansk to other major Baltic ports. To better serve the shipping connections between China and Poland, Gdansk Port set up its first Chinese office in Shanghai in 2018.

Furthermore, an ambitious project for 2020 has been initiated by Gdansk with the aim of reaching 2,350,000 TEUs, a 10% increase in comparison to 2019, with the help of the new China-Europe railway line from Xi’an to Gdansk (via Malazewicze) which was launched in November 2019. This route, whose regular service started in January 2020, provides an alternative intermodal shipping lane between China and Scandinavia, which will save up to five days. 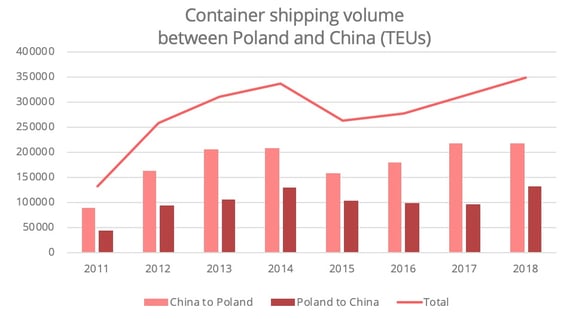 Other than Gdansk, the Port Authority of Gdynia has also signed a letter of intent with local Chinese government in Weifang to increase cargo flow between the two ports, under the initiative of the Riga Declaration, an initiative between China and CEE countries aimed at developing the logistics infrastructure and connectivity with the Baltic, Adriatic and Black seas.

The total shipping volume between Poland and China has significantly increased since 2012, the year when Poland joined the China-CEEC initiative (figure 2). However, the increase is more significant in the direction from China to Poland.

Poland, as a road transportation hub, has also expanded its connections with China in this regard. In December 2018, a successful trial run for road shipping from the China-Kazakhstan border city of Khorgos to Poland was conducted, this was followed by a regular road shipping service between China and Europe starting from April 2019.

Although the links between China and Poland have expanded over the last decade, China’s investments in the Polish transport sector remain rather modest. In fact, China’s net Foreign Direct Index (FDI) inflow to Poland accounted for less than 1% of the total FDI inflow to Poland in 2018 (based on the data provided by the National Bank of Poland). As for the transport sector, China’s major transport and logistics investment projects in CEE have taken place in countries other than Poland.

As for the rail sector, despite the fact that Poland is an important transshipment hub for the China-Europe Railway, Chinese investment in railway infrastructure is mainly in Poland’s neighbor: Hungary. The Hungary-Serbia railway project, which will connect with Piraeus, is China’s flagship railway project in CEE countries.

Similarly, Chinese investors have shown more enthusiasm towards other Baltic ports than Gdansk. For instance, Klaipeda in Lithuania has been a target for acquisition by the Chinese Merchants Group’s since 2015, however this has met with resistance from the Lithuanian government, and the Riga Port in Latvia has also received investment from Chinese Harbor Engineering to build a new coal terminal.

Why has Poland been placed in such a marginal situation in China’s investment in the transport sector in CEE, despite the crucial position Poland offers in China’s connections to Europe? 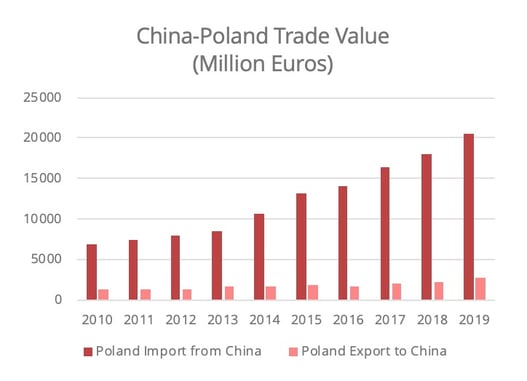 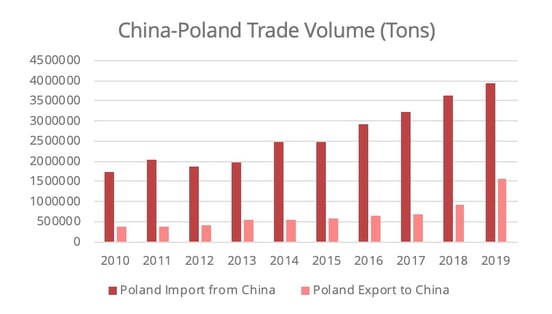 Moreover, the EU cohesion policy fund has provided Poland with major financial support in infrastructure development over the past few years. Poland has been the biggest recipient of the EU cohesion fund. In 2018, Malazewicze received funding from the EU to upgrade its railway infrastructure, which has resulted in serious congestion, due to the rapidly growing volume of railway shipments from China.

However, owing to the EU cuts of around a quarter of the structural fund for Poland for the 2021-2027 period, the Polish government may need to seek for alternative financial support for its future major logistics and infrastructure projects, such as the Central Transport Hub, which is the Polish government’s foremost transport infrastructure project. This mega airport project located between Warsaw and Lodz seeks to deepen the integration between airport and railway, which will certainly contribute to Poland’s position as the region’s main logistics hub. Since the EU’s funding is not applicable to the airport construction, many have suggested that it is highly likely that China would be considered a potential investor for this project.

Chinese investors also have their concerns. The previous failure of Chinese investment in a Polish highway project means that Chinese investors are reticent about putting their money in this sector in Poland, this has a lasting negative impact on China’s engagement in Poland’s transport infrastructure projects.

Furthermore, for Chinese investors, the strong US influence on Poland’s foreign policy can be a potential source of uncertainty for their investments in Poland. As a NATO member, Poland is in strong need of the US’s guarantee of security for geopolitical reasons. This concern may grow particularly due to the current China-US tensions.

What trend for the coming years?

On one hand, Chinese investment in other economic sectors in Poland, such as the manufacturing industry and e-commerce, could motivate Chinese investment in the transport sector to facilitate future trade. Chinese enterprises are interested by Poland’s logistics connections in order to expand the e-commerce in Europe. For instance, AliExpress is reported to be collaborating with Polish logistics companies in order to build its Eastern European distribution center in Poland, close to the German border.

On the other hand, the overall Chinese FDI in the non-financial sector is decreasing in comparison to the peak period of 2015 to 2016. Chinese FDI in Europe has dropped 40% in 2018 compared to 2017, and one of the biggest drops comes from the transport and infrastructure sector with a 96% decrease. This significant drop in the transport sector is due to a major acquisition made by China in 2017.

There are also other political barriers. The EU FDI screening regulation that recently entered into force, lists transport as a critical field of infrastructure, and this could pose institutional hurdles to Chinese investment in transport infrastructure in Poland, even if the implementation of the screening is not binding. Brussels is clearly concerned about China’s engagement in CEE countries dividing the EU and taking recipient countries into debt traps. However, the tension between Warsaw and Brussels could push Poland to turn to China.

Furthermore, the US-China tensions as well as the deficit of China-Poland trade, would be continuing factors that shape Poland’s perspective on Chinese investments.