Road transportation prices in the French market fell by 0.8% in August compared to July on our monthly Upply barometer. Thus cancelling out the slight improvement seen in July. However, this fall seems to be more in line with a contraction linked to the summer break than a sharp decline in the market.

As we can see from the July barometer, signs of recovery exist. The morale of French business leaders continues to improve. The INSEE Business Climate Index jumped by more than 6 points this month (see the table at the end of the article), and if the trend continues, it should be back up to 100 as early as October 2020.

In its update on business conditions in France at the end of August 2020, the Banque de France confirms that activity has continued to recover in August, in industry as well as in services and construction, at a moderate pace albeit a slightly better one than was expected during the previous month.

Despite these favourable economic factors, road transportation prices in France fell by 0.8% overall in August compared to July, as illustrated by this graph from our Upply database. 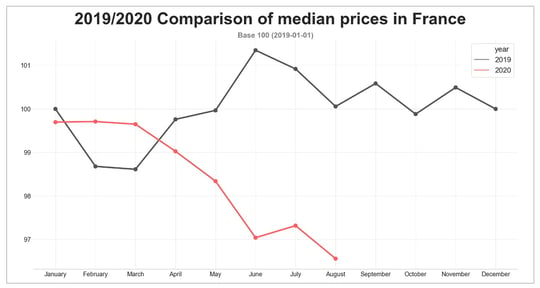 How can this trend, that on the face of it seems paradoxical, be explained? A closer examination of the variation in road transportation prices shows there is a very different picture of traffic flow from its normal structure. This comes as no surprise to anyone. In August, the French go on vacation and factories close or significantly reduce their output. This has a logical impact on transportation, namely on the quantities transported, the nature and balance of traffic flows. Proportionately, the number of spot transportation will diminish more than that of regular transportation.

As such, we see some notable variations on inter-regional prices:

This relative similarity between August 2020 and August 2019 indicates that seasonal variations do exist and that the average fall in prices observed between July and August is the result of a summer contraction in the market. It can be concluded that prices did fall in August, but in a normal and expected manner.

A situation that will continue to be under tension

However, the situation remains worrying. Over the period of a year, transportation prices fell by 3.5% in France. Even if this decline in prices is accompanied by a reduction in costs (see table below), the more fragile carriers will suffer. We must keep in mind that the Upply price barometer shows the median price observed in the market, which means that 50% of the lanes are showing even greater declines.

In recent months, transportation companies have become more fragile and their capacity to ride out any economic downturn has been reduced. The economic recovery plan presented by Jean Castex on September 3rd, however, seems to have ignored them. The sole positive note remains the government's desire to promote the economy by refusing to resort to lockdown measures, which should generally reinforce the demand for transportation in France.