Coronavirus and air cargo: the worst is yet to come

World air cargo traffic decreased by 3.3% in January 2020 compared to the same period in 2019. But the worst is yet to come, due to the coronavirus epidemic which is disrupting factory production and air links.

The easing of the trade war between China and the United States, which resulted in the signing of a provisional agreement on customs tariffs on January 15th, raised hopes of a recovery in the air cargo industry in 2020. But the Covid-19 epidemic has come along to violently upset these prospects.

Traffic in tonne-kilometers decreased by 3.3% compared to January 2019, marking the 10th consecutive month of decline for the sector. We also note a clear acceleration of this decline, which had been limited to only -1.4% in December. At the same time, capacity increased by 0.9% in January. As a result, the load factor decreased by 1.9 points to 45%.

A shock felt since February

According to IATA, the coronavirus crisis has only had a limited impact on January's results. The low levels of traffic are mainly explained by the dates of the Chinese New Year, which came earlier than in 2019. Factories closed earlier than last year, resulting in lower volumes.

However, the impact of the measures taken to counter the coronavirus epidemic are expected to be clearly felt in February. On the one hand, factories remained closed in China longer than expected because of the containment decided in certain provinces: so therefore there were less goods to be transported. On the other hand, airlines have suspended their services to certain destinations.

"Tough times are ahead of us," warns Alexandre de Juniac, director general and CEO of IATA, adding that many doubts persist about the course of events to come. The suspension for 30 days of all travel by foreigners coming from Europe (Schengen area) to the United States from March 13th, announced by Donald Trump, confirms the danger.

Air freight is all the more exposed as China is one the industry's heavyweights. Sectors which have been severely affected by the paralysis of factories such as automotive, luxury goods and semiconductors, have traditionally been major consumers of air cargo. On the other hand, China's overall weight in the global economy has increased significantly compared to its level during the 2003 SARS epidemic.

IATA anticipates very negative consequences especially in terms of traffic on the Asia-Europe and Asia-North America corridors, which together account for more than 40% of international traffic. But given the rapid spread of the virus to all regions of the world, no routes should be spared. The three major world air cargo markets, namely North America, Asia and Europe, are now in turmoil.

What will be the impact of the crisis on transport prices? In the direction Europe to Asia, our Upply database reveals a drop in freight rates since January that is expected to continue. However, in the direction Asia to Europe, prices should start to rise again. The gradual resumption of production in Chinese factories, while available capacity remains limited due to restrictions on passenger flights, will encourage this trend.

The airlines most affected by the decline in January were those from Asia-Pacific (see table below), although demand was slightly on the rise in seasonally adjusted data. The same trend can be observed for carriers from North America. On the European side, however, the decline is confirmed in both raw and adjusted data. Airlines in the Middle East have also recorded a fall, and IATA highlights their significant exposure to the impact of the Covid-19, given the region's role as a hub.

Finally, two regions are in the positive zone: Latin America but especially Africa, whose airlines recorded the largest increase of all the regions for the 11th consecutive month. The limited information about the coronavirus epidemic in this area does not allow for a precise measurement of the risk for the coming months, but given the links of this continent with China, it is difficult to see how Africa could be spared from the crisis for very much longer. 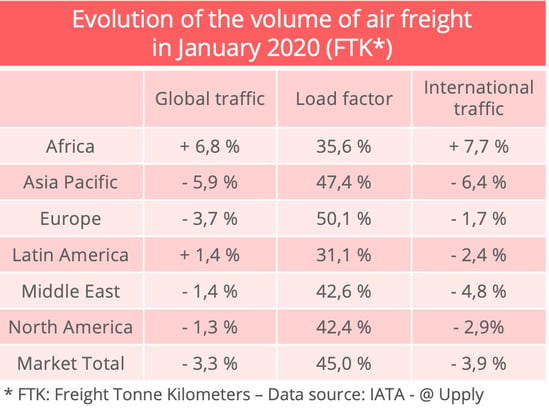 Global demand for air freight fell 5.2% in March 2022 year-on-year under the impact of the conflict in Ukraine and the effects of the Covid-19 pandemic in Asia. In recent months, air freight growth has been slowing after a period of strong recovery. In March, however, traffic growth stopped altogeth...
Anne Kerriou
4 min