Mid-year growth forecasts for 2022 have been revised downwards. The growth of international freight trade is slowing down, and international transport prices are stabilising.

After the strong rebound in 2021, a slowdown in global growth was to be expected, but it turns out to be more brutal than anticipated. "Compounding the damage from the COVID-19 pandemic, the Russian invasion of Ukraine has magnified the slowdown in the global economy, which is entering what could become a protracted period of feeble growth and elevated inflation," warns the World Bank in its June report on global economic prospects, pointing to a growing risk of stagflation.

"The outlook has darkened significantly since April. The world may soon be teetering on the edge of a global recession, only two years after the last one," confirms the IMF through the voice of its chief economist, Pierre-Olivier Gourinchas. The latter recommends "strengthening cooperation", described as "the best way to improve economic prospects and mitigate the risk of geoeconomic fragmentation. Multilateral cooperation will be key in many areas, from climate transition and pandemic preparedness to food security and debt distress," says Pierre-Olivier Gourinchas.

A sharp and lasting slowdown in growth

In the light of the new geopolitical environment, the World Bank has significantly lowered its growth forecasts. World GDP is expected to grow by 2.9% in 2022, "which is significantly lower than the 4.1% forecast last January." Even more worrying: this is not a short-lived deceleration. The World Bank estimates that the rate of growth "is expected to hover around that pace over 2023-24, as the war in Ukraine disrupts activity, investment, and trade in the near term, pent-up demand fades, and fiscal and monetary policy accommodation is withdrawn". 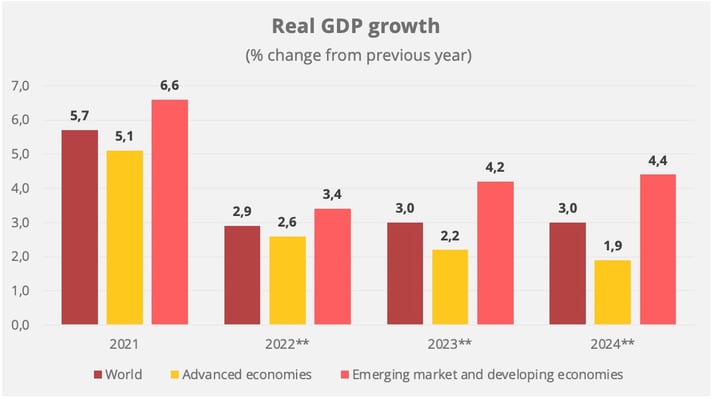 In its updated forecast in July, the International Monetary Fund is roughly on the same page as the World Bank. It announces an overall GDP growth of 3.2% for 2022 and 2.9% for 2023, a deterioration of 0.4 and 0.7 percentage points compared to April's figures. On the other hand, the IMF is considerably more pessimistic about Chinese growth, with a supposition of +3.3% against +4.3% for the World Bank. The IMF points to "stalling growth in the world's three largest economies", namely the United States, China and the euro area. Conversely, the conflict between Ukraine and Russia is boosting the growth prospects of oil and gas exporting countries. 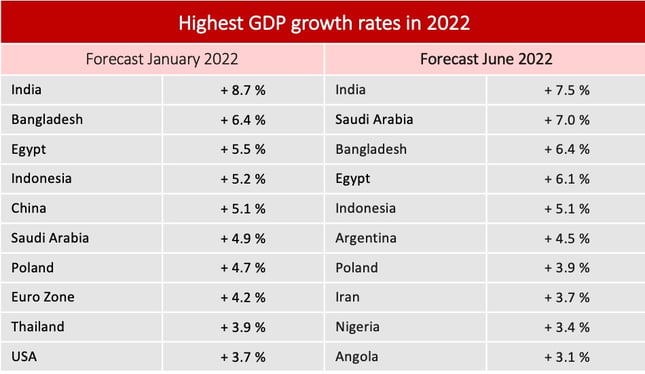 For the IMF's chief economist, inflation is now "a major concern." According to updated forecasts, it is expected to reach 6.6 % in advanced economies and 9.5 % in emerging and developing economies this year, supported especially by rising food and energy prices. This represents an upward revision of 0.9 and 0.8 percentage points respectively.

In 2021, inflationary trends were fuelled by a stronger-than-expected recovery in demand, which led to disruption of supply chains and tensions over access to labour forces. Parameters that remain in 2022. The rise in prices is beginning to cause an easing off in demand, but a geopolitical factor has rekindled the embers: the conflict between Russia and Ukraine. By stimulating a new surge in prices, particularly for energy and certain agricultural products, the war is making the prospects for normalisation less likely.

"Global inflation is expected to moderate next year but it will likely remain above inflation targets in many economies", the World Bank said. Countries are now attempting to curb inflation by changing their monetary policies. In the United States, there was an upturn in July, and the eurozone now has the highest inflation rate.

France is showing fairly strong resilience. Over a year, according to the provisional estimate made at the end of the month, consumer prices increased by 5.8% in August 2022, after +6.1% in July, indicates the INSEE. The decline in inflation would seem to be due to the slowdown in energy prices, while those for manufactured goods and food are seen to have accelerated. 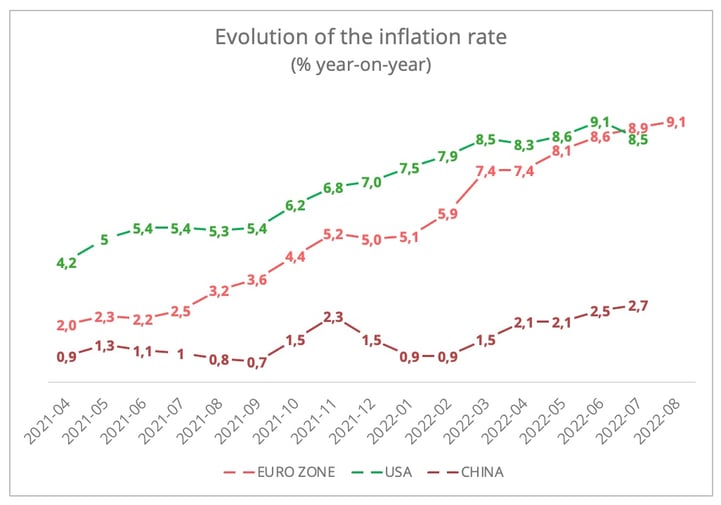 This inflation, which is difficult to contain, is now weighing heavily on business activity, but also on household purchasing power. After the overheating of demand in 2021, the world may well experience social overheating. There are increasing demands for wage revaluation.

According to World Trade Organization (WTO) statistics, the volume of world trade in goods has stagnated, after the surge observed in 2021. Growth is still strong, but year-on-year it stood at 3.2% in the first quarter of 2022, compared to 5.7% in the fourth quarter of 2021. The expected trend is also a slowing down in the second quarter, despite continued growth in trade, with the impact of the Russia-Ukraine conflict partly offset by the easing of Covid control measures in China, which had severely affected trade earlier this year. World trade growth is also expected to remain weak in the second half of the year, says the WTO, with in particular the faltering in the driving force that is China. Updated forecasts will be published in early October.

The pandemic situation remains a source of considerable uncertainty. At the beginning of September, the Chinese authorities announced new lockdown measures in Chengdu and a tightening of restrictions in Shenzhen. The juddering Zero Covid policy, and more structurally the geopolitical tensions, are now sufficiently worrying for leading manufacturers to decide to put into action their desire to diversify the supply chain. An example of this is the case of Apple, which chose to turn to India for the next version of its iPhone. However, it should be stressed that China still dominates world trade in goods to a very large extent, as shown by the evolution of the trade balance with both the European Union and the United States in the first half of 2022.

The trade balance between the US and the EU will also be closely monitored, as the euro depreciates against the dollar. This trend could, of course, offer good prospects for European exporters, provided that demand is present, which is still a major unknown.

In 2021, international transport prices rose sharply. But a stabilisation is announced for the second half of the year, accompanied by a drop in demand for both air freight and maritime container transport. Road transport responds to market developments with a slight lag, be they upwards or downwards. Boosted by the impact of the pass-through mechanisms of fuel increases, European road transport prices reached record highs in the first half of 2022.

The period ahead will be particularly difficult for the shipper/carrier relationship. On the carrier side, only maritime shipping companies were able to build up a "war chest" when freight rates skyrocketed. 2021 and 2022 will certainly go down in history for the records achieved in terms of profits. As for airlines and road hauliers, the situation is radically different. The former survived through financial aid and are far from being out of the woods. Of course, cargo activity has generated record revenues, but the overall financial equilibrium of the companies that carry out both freight and passenger transport activities remains very fragile. Similarly, road hauliers continue to operate in a low-margin sector, with freight rate increases largely being the result of increases in costs.

Regardless of the sector of activity, all carriers are now facing high inflation in their operating expenses, whilst at the same time having to make massive energy-transition investments. But while shipping companies have reserves, airlines and road hauliers have no room for manoeuvre. Pass-through of cost increases will be a matter of survival for them. However, opposite them shippers also see their room for manoeuvre reduced. They are also experiencing a surge in costs and, in certain sectors, have to prepare for a fall in demand, with the end consumers themselves having no choice but to make concessions in their purchases.