Between June and September 2021 road freight transport prices in Europe recorded a fifth consecutive quarterly increase. The increase in demand, but also in costs, is fueling this trend.

The Ti / Upply road transport price index in Europe hit a new record in the third quarter of 2021, standing at 107.6. It showed a rise of one point compared to the previous quarter and 3 points year-on-year. It has also seen an increase of 4% compared to Q2 2020, that is to say the period during which the disruptions linked to the Covid 19 pandemic reached their peak. 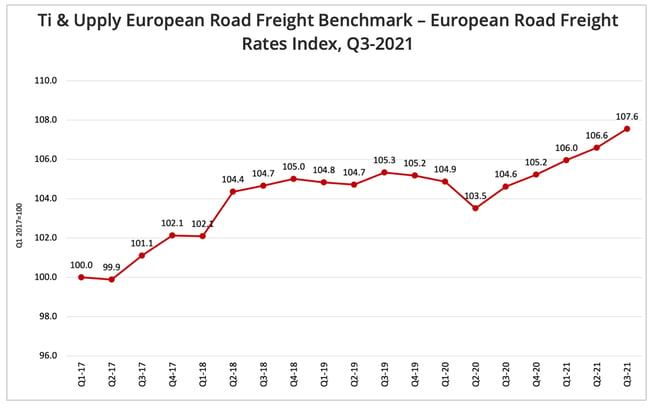 Source: Ti/Upply -  NB : Our price estimates are based on actual transactions. The Covid-19 epidemic and its impact on the level of activity have made data collection more complex. The index may therefore be subject to revisions as new data are incorporated into the Upply database.

Strong demand in a context of driver shortage

This upward trend was expected. It is primarily the result of the dynamic demand, which is unrelenting, both in the retail trade and the manufacturing industry. This is obviously the primary driver of the rise in freight rates.

On top of this the road transport sector is beginning to face capacity shortages. There is no shortage of means of transport, although semiconductor shortages have slowed the production of new vehicles fueling inflationary trends in the used vehicle market in the process. But the lack of drivers is becoming desperate. As a partner of this new edition of the Ti / Upply report, the IRU recalls that in Spain, according to its 2020 annual survey, the shortfall is expected to increase from 7% in 2020 to 10.2% in 2021. France and Germany are also very affected, as is the United Kingdom where the phenomenon has been aggravated by the impact of Brexit.

At the same time, road hauliers are facing significant increases in several major cost items. The labour shortage, primarily, is putting pressure on wages. It is not yet palpable everywhere, but in the United Kingdom, where the deficit was particularly blatant, companies have offered bonuses and / or increases to attract candidates.

Finally, road transport professionals are also penalised by the bottlenecks which are disrupting global logistics chains at the moment. Congestion, production delays which undermine projections, etc ...: all these uncertainties lead to a potential increase in operating costs, in a sector where margins are not traditionally high. In a favorable supply / demand context, carriers therefore endeavor to pass on at least part of the additional costs they incur.

"As the peak season approaches and with rising costs, especially diesel prices, all the ingredients for a period of sustained rate inflation are in place," said Nick Bailey, research director at Ti. “A 5% increase over 15 months should be confirmed at the end of 2021 and the beginning of 2022. From the carrier's point of view, this rise is necessary to cover the increase in their operating and recruitment costs”, confirms Thomas Larrieu, general manager of Upply.

However, preserving margins will be a real challenge for carriers over the coming months, given the soaring costs. The context linked to the pandemic continues to make the economic outlook very uncertain, with in particular the hypothesis of the 5th wave which seems to be confirmed in several European countries, however, it is not possible at this stage to measure the consequences on demand.