For the last ten years or so China has been weaving a network of entry points into European ports, from the Mediterranean to Northern Europe, all linked to the Belt and Road Initiative (BRI). This strategy is reminiscent of those of the colonial factories and the 19th century concessions, which the western powers used to create their networks in China.

For we Europeans the creation of factories (trading posts) and the 19th century concessions in China is now considered as a simple composite element of the colonial history for western countries and Japan. We have very little idea of just how much this exterior interventionism was humiliating and an integral part of the structuring of China’s post-revolutionary DNA. Despite this, as has been demonstrated during the 70th anniversary of the Communist Revolution, the “Chinese dream” has taken up one of the essential elements of Mao’s message of 1949: give back to China its national pride after centuries of humiliation.

To install and establish the Belt and Road Initiative, which is an essential element for its re-conquest, China has endeavoured to create a network of European ports that is essential to fulfill their supremacist vision of access to markets. The final objective is to bring in consumer goods to European households and business premises by whatever means necessary and at any cost. Massive official BRI Chinese government subventions are there to stand witness to this. They can lead to absurd excesses: as has been related by Loadstar, certain exporters have gone so far as to send empty containers to Europe just to be able to cash in on the subventions.

This network of European ports, that we can compare to the setting up of “factories” in Europe, started more than 10 years ago with the opportunity to invest in the Port of Piraeus. A weak link in the chain at the time, this port was a totally undreamed-of entry point into the European Union at the crossroads of the Mediterranean and its position as an ideal barycentre will enable it to become a transhipment hub for the Mediterranean and the Black Sea. 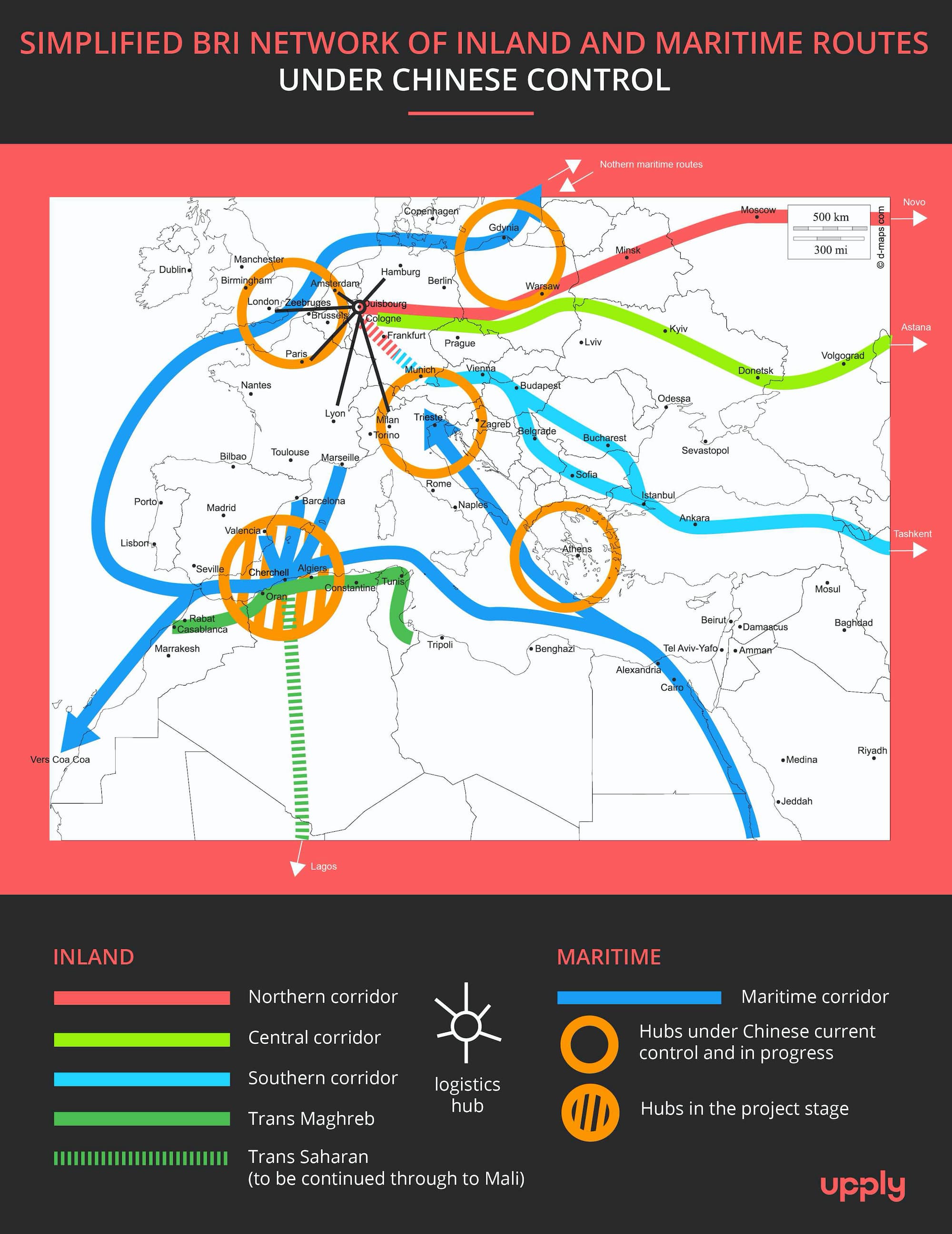 In the Mediterranean the signature of this year’s agreement with Trieste, that comes with the modernisation and adaptation of the port’s facilities, completes an inroad to the South with direct access to the “Blue Banana” and ideally will make use of the existing port of Piraeus.

Another project has emerged that will complete the Mediterranean bases: that of the deep-water port of El Hamdamia in Cherchell, Algeria. This project, which was to be completed in March 2019, includes the construction of port facilities that are expected to be able to cater for traffic of 25 million tonnes per year. There is also a motorway access that provides a direct link trans-Maghreb and a trans-Saharan southern expressway through Mali to Lagos which offers a gateway to Central and Western Africa.

The present situation in Algeria does not allow us to have a clear view of the progression of this particular project, some sources have reported that there may even be a transfer to Annaba. However, regardless of the situation, the zone is without a shadow of a doubt a strategic target.

Elsewhere, the construction of a monumental Mosque in Algiers by a Chinese company and the contract for the complete overhaul of the IT system of Sonatrach, the biggest player in Algerian economy, being awarded to Huawei, make up two very significant elements that characterize the Chinese presence in Algeria. A Memorandum of Understanding between the two countries was signed in June 2019. It covers cooperation between both countries in the framework of the BRI that is the initiative covering “the Silk Road Economic Belt and the 21st Century Maritime Silk Road”.

Further north, the signature of a letter of intent between the Chinese authorities and the Polish port of Gdynia on the 25th of September 2019, reinforces the existing network that includes the rail hub in Brest-Litovsk and provides an access to Central and Eastern European manufacturing and also their consumers.

Finally, Zeebrugge is a prime target for Chinese interests. This is one of Europe’s major roll-on/roll-off ports whose container activity is struggling to find economic relevancy compared with Anvers and Rotterdam. China has already started to prepare its first move. A few months after the takeover by Cosco Shipping of APM’s terminal in the port of Zeebrugge, another Chinese group has announced that it will be investing 85.3 billion euros in the construction of a logistics park close by.

Slowly but surely, the network of European ports that are controlled by Chinese operators is undeniably taking shape.