The road freight transport prices in Europe fell by 0.8% in the first quarter of 2020 compared to the previous quarter, and by only 0.2% compared to Q1 2019. The impact of the Covid-19 epidemic was still limited during this period, though there were some warning signals on certain lanes.

The road freight rate on the main international lanes in Europe averaged € 1,099 in the first quarter of 2020, a decrease of 0.8% compared to the 4th quarter of 2019, reveals the latest European Road Freight Development Benchmark published by Upply and Transport Intelligence (Ti). This is almost the lowest level seen in two years (€ 1,096 in Q2 2018).

Based on the 34 lanes studied in the Ti / Upply report, the average price per kilometer paid by shippers was € 1.61 in Q1 2020. If the health crisis has not yet had a massive impact on prices during this first quarter, it is manifested, however, through a sharp increase in rate volatility, which should continue over the coming months. 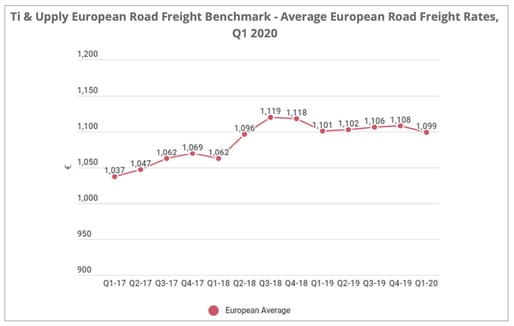 The Covid-19 pandemic has of course played a role in the development of prices on certain lanes, particularly from March on. However, the decline is also explained by an economic slowdown that preceded the health crisis. In the manufacturing sector, for example, volumes had fallen by 1.3% on average in January and February, confirming an already significant despondency in the 4th quarter of 2019. This development obviously accelerated in March. However, carriers reacted quickly by significantly reducing capacity, which partially offset the drop in demand.

TO LEARN MORE AND CONSULT THE DEVELOPMENT ON OTHER LANES: