France: road transport prices continued to rise in May

Road transport prices rose by a further 0.7% in May compared to April, according to the Upply Freight Index, driven in particular by the increase in diesel fuel. Although the looming threat of a recession is on the horizon, inflationary factors remain very strong.

The economic situation is weighing more and more heavily on the morale of the French. Inflation, which according to the provisional estimates published by INSEE, has risen to 5.2% over one year, is now a major concern. It continues to rise inexorably, driven by a spike in energy prices (+28% over 12 months) which is exacerbated by the Ukrainian conflict. In this month of May everything is rising: food prices are rising by 4.2%, service prices by 3.2% and manufactured goods by 2.9%.

The French have come to realise the full extent of the price increases because inflation is now eroding their purchasing power. It had fallen by 1.9% in the first quarter. Consumption, the main driver of French growth, fell by 1.3% over the same period compared to the fourth quarter of 2021, and then fell by a further 0.4% in April compared to March. Consumption of goods was particularly affected (-1.7% in the first quarter). In particular, households have drastically reduced their food purchases. The conditions for a recession are gathering...

Deceleration of the increase in transport prices

In this economic context of "stagflation" which we identified as early as February, transport prices have risen further. The Upply Freight Index (Road France) shows an increase of 0.7% in May compared to April, more or less aligned with the increase in transport costs (see table of key indicators p.XX). 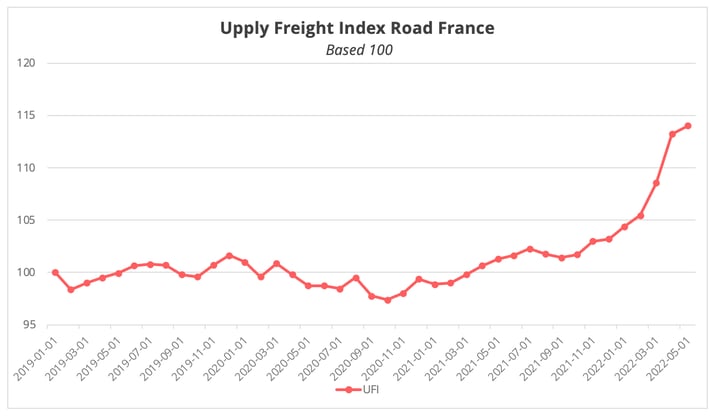 The increase therefore remains substantial, but is decelerating significantly. This is the weakest monthly increase observed in 2022, far from the crazy price rises observed in March (+3.0%) or April (+4.4%).