Growth in air freight volumes and prices slowed in July 2021 but the trend has begun to reverse in the current late summer period, indicating that the peak season is getting under way.

Latest IATA figures show that global demand for air freight rose 8.6% in July 2021 by comparison with July 2019. Although this was less than the 9.2% growth rate registered in June, volumes are still above pre-pandemic levels. "Overall growth remains strong compared to the long-term average growth trend of around 4.7%," IATA noted. The strength of the recovery is confirmed, too, by first half results.

On the capacity front, the situation has eased slightly since available capacity was 10.3% down on its July 2019 level, compared to 11.8% in June. This positive movement remains fragile, however. August figures are not yet available but IATA expects the trend to be reversed. The spread of the Covid 19 Delta variant has resulted in fresh health measures which have affected airport operations and the still convalescing passenger flight sector, particularly in China, South East Asia and Europe. The airlines have had to reduce their flight schedules for both mixed and all-cargo aircraft.

The load factor rose to 54.4% in July 2021, 9.5 points more than in July 2019. Taking international flights alone, it rose to 62.8%, with record levels registered by carriers in North America and the Asia-Pacific region. Over the last three months, load factor growth showed signs of slowing, according to seasonally adjusted data, but operating difficulties in August should once again reverse this trend.

Price trends in July confirmed what was seen in June. The rate of increase is easing. The growth rate was more modest than in the previous month and some routes even saw a relatively marked fall in rates.

We are nevertheless far from market normalisation. By comparison with 2020 rates, which were already high, a number of routes registered significant increases. Early data for the month of August in Upply's data base indicates that rates are clearly increasing again, particularly on Asia-Europe routes, which showed a 19.7% increase. This trend is the result of operational difficulties which reduced capacity, particularly for flights to and from China. The current hyper-reactivity of the market is symptomatic, however, of an industry which is still shaken after having suffered multiple impacts during the crisis. 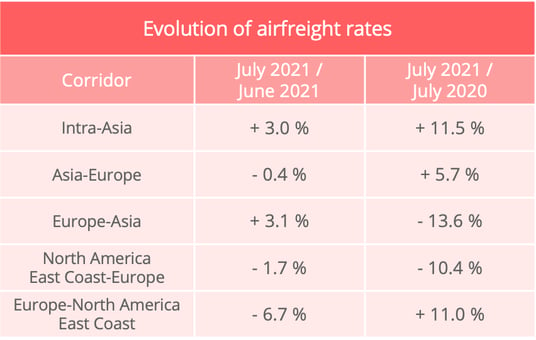 Source : Upply - NB : These estimates are based on real transactions. The price variations shown may be reviewed as fresh data is incorporated into the Upply data base.

Dynamic prospects for the weeks to come

We can see in this return to strong freight rate growth the first signs of the early peak season predicted by IATA in June. "Economic conditions continue to support air cargo growth," IATA said. The new export order component of the global manufacturing Purchasing Managers' Index (PMI) stood at 52.7 in July, which "could translate into demand for air cargo in the near-term", according to IATA. The manufacturing production index also stayed at a high level, indicating that demand for goods remains strong.

Continuing supply chain congestion, which is barely easing, is favourable to air transport. Several factors are causing the congestion. Firstly, production itself has been disrupted. Some factories have had to reduce production or even close because of Covid. The container shipping industry is still offering a much-deteriorated quality of service, even though prices are at unprecedented levels. The road transport sector is also under strain. In short, the entire transport chain has seized up, as the supplier delivery times PMI shows, with the situation particularly critical in the United States and Germany.

The rapidity offered by air transport is also highly prized because the peak season is approaching and stocks are at a particularly low level.