DOSSIER. The “Upply Tour de France of transport and logistics" comes to an end in Île-de-France. Through its connectivity, its economic weight and the size of its population, this region plays a key logistical role.

"The new map of French regions, which came into being through the law of January 16, 2015 relating to their delimitation, should not lead to a dilution of the Île-de-France region, neither within France, nor within the European Union. With a GDP close to that of the Netherlands, the capital region retains a special role within the national economy, especially at an international level, where its role as a gateway is more than necessary in an economy that has become globalized and competitive”. This introduction to a study on "the trajectories of the Île-de-France economy", conducted in 2016 by the IAU (Institute for Planning and Urbanism), immediately defines the weight of Île-de-France in the national economy.

Île-de-France has 8 departments. It is characterized by a very high population density and is ranked 1st nationally in number of inhabitants. The size of its consumer catchment area is already enough to make it a strategic zone for logistics activities. To cite just one example, Rungis' Market of National Interest is the world's leading fresh produce market: "2.6 million tonnes of produce pass through, are exchanged in the pavilions or are stored in the warehouses", underlines the IAU. “The retail sector occupies a very important place in Île-de-France. On the other hand, the size of this consumer catchment area also drives the development of e-commerce”, adds Philippe Munier, TLF Union's regional delegate for IDF, Centre and Ouest.

The logistical function of Île-de-France goes far beyond regional borders. The territory benefits from a very dense road network, which allows it to be efficiently linked to all the main European centers. Île-de-France is also endowed with an intricate network in terms of rail freight, as well as a regional waterways network which allows it to claim the 2nd place in Europe, with 70 ports and 10 multimodal platforms spread over 500 km of waterways. "Gennevilliers is the leading port platform in France, and the Port Seine-Métropole Ouest (PSMO) project located on the Plaine d'Achères, west of Paris, could eventually complete the network of platforms", details the IAU study.

Finally, in terms of international trade, Île-de-France relies on the proximity of major gateways, such as Le Havre or Antwerp for the maritime sector or even Roissy-Charles de Gaulle airport, 1st or 2nd European platform in the air freight sector depending on the year.

As a major consumer zone and a European hub, Île-de-France attracts flow of goods. However, we should not forget that it is also a region of production, even if it has not been spared from the general decline of industry in France. According to the INSEE, the industrial sector in Île-de-France employed nearly 460,000 people at the end of 2015, or 14.1% of industrial employment in mainland France. As such it comes in at 2nd place nationally behind the Auvergne Rhône-Alpes region.

Île-de-France is also a large agricultural region, even if here too, employment is low compared to the tertiary sector. The region is notable for the importance of its arable crops, and in particular wheat. Besides cereals, it also produces fruit and vegetables.

According to The Atlas of warehouses and logistics areas produced by the Transport Ministry’s Observatory and Statistics Services, the Île-de-France region was ranked 1st nationally in 2015 in number of warehouses of more than 5,000 m², with 646 sites. Of the 60 so-called “dense” logistics areas, i.e., with at least 10 EPLs (warehouses or logistics platforms), 13 of these are located in Île-de-France. “The main one is located north of Paris and stretches over an arc of around twenty kilometers between Gennevilliers and Tremblay-en-France. It comprises 120 EPLs of more than 5,000 m²”, specified the Observatory. The second, with some forty EPLs of over 5,000 m², is located at the intersection of the A4 and A86 freeways, to the south-east of Paris.

As underlined in a study focusing on the renewal of the warehouse stock carried out by the Île-de-France DRIEA (Regional and Interdepartmental Planning and Infrastructure Authority), the logistics dynamic in Île-de-France is antiquated. “It dates back to the development of industry and commerce. However, this development accelerated from the 1960s on, with the deployment of warehouses, especially in the inner suburbs. Then, under the effect of the outsourcing of logistics activities but also of the development of road infrastructure, the stock of warehouses in Île-de-France has been renewed and decentralized to the outer suburbs since the end of the 1990s, reaching a total of around 17 million m²”.

The average surface area comes to 19,300 m² compared to 17,590 m² for the national average. To meet the growing demand for freight transport, warehouse production since 2010 is estimated at around 680,000 m² / year. This expansion today goes even further than the outer suburbs. "Between 2010 and 2013, 68% of construction was carried out outside of the Francilienne regional ring road", underlines the IAU study.

Today, new issues are emerging. “Its consumer catchment area remains centripetal. (...) In the denser areas, with the surge in online sales and the deliveries they generate, last mile logistics is a major issue for metropolitan operations. Distribution centers and platforms located in urban areas as close as possible to consumer zones must be planned, and logistics better integrated into urban projects”, recommends the IAU. Initiatives in this area have multiplied in recent years, but the meteoric breakthrough of e-commerce has increased the needs tenfold.

In addition, Île-de-France must ensure that it maintains its logistical competitiveness. “Regional planning is a lever to strengthening logistical activity, particularly for Île-de-France in connection with Le Havre, within the framework of the Seine valley or, in the future, for the north of Europe with the Seine-Nord canal project', illustrates the IAU.

This connectivity is all the more important as Île-de-France is by far the leader among the French regions for international trade, both for imports and exports. On the other hand, its trade balance is very much a negative one, with 104.2 billion euros of exports for 150.3 billion of imports, which is explained in particular by the size of its population. "The most exported products reflect the specializations of Île-de-France's industry (automotive, aeronautics and pharmaceuticals) and the region's importance in the luxury sector (leather, perfumes, cosmetics, etc.)", specifies the IAU. 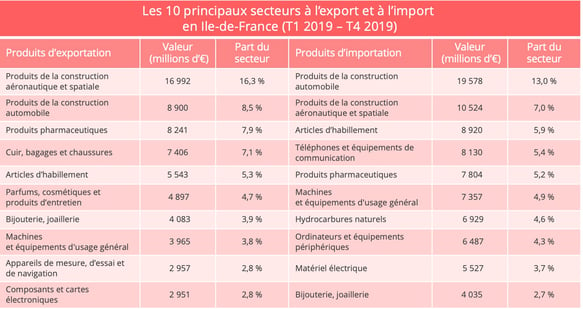 Île-de-France trades mainly with Europe, which represents 58% of its exports and 63% of imports. But the region is also notable by the weight of trade with the United States and China. Trade with these two countries is also marked by a strong trade deficit. 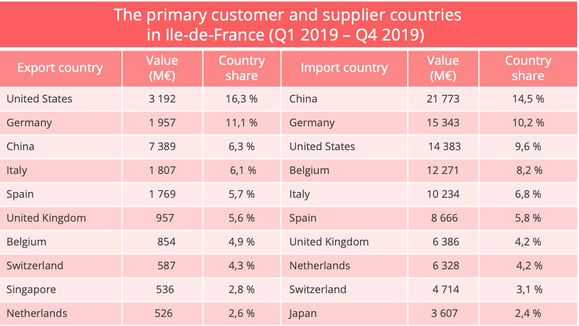 The Ile-de-France region in figures