The economic actors of the French Overseas Territories, the DROM-COM (*) are worried about the increase in sea and air freight rates. Admittedly, the increase is not as significant as on the Asia-Europe or the Trans-Pacific corridors, but the economy of these territories is very dependent on the import logistics chain.

The prices for the same product are generally higher in overseas territories than in mainland France. Two essential parameters contribute to this difference: the relatively modest size of the markets concerned, and the insularity which induces more costly transport, as well as the imbalance of flows.

Transport prices are therefore a particularly sensitive subject for Overseas Territories. The issue is not new: it was already one of the areas of work identified in the 2017 EROM Law (Real Equality Overseas). But it is coming once again to the forefront with particular acuteness, due to the surge in freight rates observed since the start of the Covid-19 pandemic in containerized maritime transport and air transport. "We must not lose sight of the fact that the price of transport aggravates consumer prices with taxes indexed to the value of the goods + transport for the calculation of duties and taxes, in particular dock dues", Underlines Jean-Claude Florentiny, president of the SCDTM (Union of Freight Forwarders and Brokers of Martinique).

Admittedly, the impact of transport remains marginal on the final price of imported goods. In a July 2019 notice on the operation of competition in Overseas Territories, the Competition Authority assessed the cost of maritime transport in the final price at "less than 5% on average, considering only the 'freight' part, and excluding fuel and handling costs (...) ”. That being said, the proportion can vary considerably, penalizing in particular products with low added value. On the other hand, dependence on maritime transport to meet demand is extremely strong. “Ports are the real economic lifeblood of the French Overseas Departments and Territories because they are their main, if not the only, point of entry. In fact, more than 95% of trade in goods from or to these territories pass through ports,” underlines the Competition Authority. The diagnosis also applies to the Pacific Islands.

This extreme dependence imposes more than elsewhere a need to anticipate the fluctuations, which also comes at a cost. "Since the start of the Covid-19 pandemic, importers / shippers have found themselves obliged to over-stock on overseas destinations, in order to avoid stock shortages due to the increase in prices of raw materials and the availability of goods,” explains Jean-Claude Florentiny.

While the maritime transport prices, and to a lesser extent those of air freight transport, are experiencing an unprecedented rise worldwide, we wanted to take stock of the specific markets that are the Overseas Territories, starting with the indicators from our Upply database (**).

According to our Upply database, the median price to ship a 40' HC container from Europe to the West Indies increased by around 20% between September 2020 and September 2021. “If we compare this to the Asia-Europe freight rates, which have been roughly quadrupled, we can consider that we have been relatively spared. Nor do we have that much to complain about concerning the regularity of the services. On the other hand, we still deplore goods being left at the docks, and we also suffer from a lack of containers”, underlines Jean-Claude Florentiny, president of the SCDTM. With the exception of a low in July, sea freight rates have grown quite steadily, as shown by those between Le Havre and Pointe-à-Pitre for exemple. A similar trend can be observed for Fort-de-France, but with a median price approximately 25% higher. 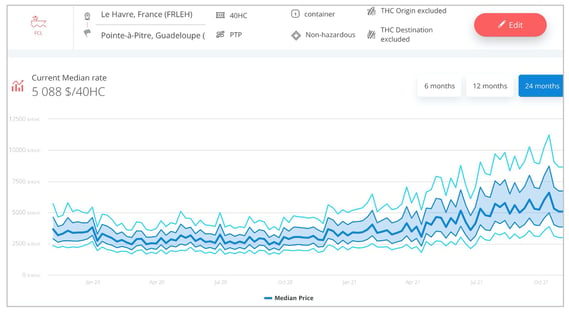 Three shipping companies, linked together by a Slot Charter Agreement (SCA), operate the Northern Europe-French West Indies link, which represent 90% of flows from Europe: CMA CGM, Marfret and Maersk. The first two also operate on the Southern Europe to French West Indies lane, as well as on the Europe-French Guiana lane, says the Competition Authority in its notice of July 2019.

Unlike sea freight, where prices did not increase sharply until October 2020 (at least in the case of the Overseas Territories), air freight experienced a surge as soon as the Covid-19 pandemic broke out. “On the West Indie and French Guiana destinations, there are no all-cargo flights. Cargo travels exclusively on passenger aircraft. The supply was drastically reduced in spring 2020, during the first lockdown, before gradually increasing. In the West Indies, today's rate stands at around 4 € / kg, compared to around 2.60 € before the crisis. And in French Guiana, we went from around € 3.80 / kg to around € 4.50”, indicates Jean-Claude Florentiny.

The quality of service is also a matter of concern. "Here again, we regularly see goods left at the dock and we lack visibility," said the president of the SCDTM. Airlines are indeed faced with a complex situation: it is very difficult for them to anticipate passenger flows in the context of the current pandemic, and therefore to optimise capacity adjustment. The peak season of November-December raises a great deal of concern in this respect.

The situation is a little different for the island of Reunion, where maritime transport prices from Europe seem to have reached their peak in the first half of the year before calming down and returning at the end of October to levels similar to 2020.

On the other hand, given its geographical position, the island is also highly dependent on supplies from Asia. And on this corridor, freight rates are showing a significant increase. 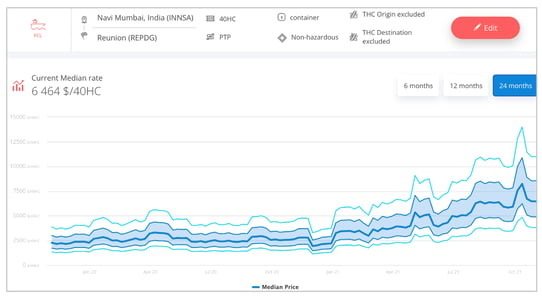 "My goods have been ready to leave for a month and they are blocked in Jaipur in India for lack of available containers and prices have been multiplied by five," noted last August the owner of a furniture store in Saint-Denis, interviewed by the news channel France TV Info Réunion. The company Soboriz, specialized in the import, milling and packaging of rice in Reunion, came to identical conclusions as reported in the French magazine Les Echos. "In one year, the price of transporting a container has risen from $900 to $2500 and shipping companies are allocating insufficient capacity to rice. It is becoming more and more difficult to get our orders to leave on time," Patrick Barjonet, the company's general manager, told the business daily.

The situation is critical enough for the regional council to have decided to deal with the subject. The economic actors of Reunion island are directly affected by the increase in freight rates, but also by storage costs. "The considerable delays of freight both in import and export lead to the obligation to over-stock to avoid supply disruptions, causing additional logistical costs and raising problems of storage capacity in the territory," notes the Region.

The temporary interruption of the stopover in Reunion decided by CMA CGM and Maersk also disrupted the flows, the region regretting that "the small volumes" are "sacrificed for the benefit of large markets" (article in French). In the region, Mayotte has also undergone the same treatment, this destination being essentially served by transhipment from the island of Reunion. A meeting between the elected representatives of the Region and the island’s economic actors took place at the end of August. The opportunity to bring to the table the possible creation of a regional shipping company, and in the shorter term, to evoke possible financial aid.

The increase in transport prices is also affecting air freight. Prices rose sharply during the spring 2020 lockdown and stabilized in 2021 at high levels.

Evolution of prices Paris / Reunion from airport to airport for a shipment of 500 kg of non-dangerous cargo. Source : Upply (11/5/2021)

In New Caledonia, the increase in freight prices is also a major concern, as is the deterioration of the quality of service.

According to a notice from the Competition Authority of New Caledonia published in December 2020, the main trade route is the one that connects Europe and in particular France, to New Caledonia, with two alternative routes: via the East passing through the Suez Canal and via the West through the Panama Canal. "Lanes to Europe account for 45-50% of container volumes. The second trade route, with Asia, represents 25%-30% of imports, 80% of which come from China (raw materials, cars etc). Southeast Asia, along with Thailand and Indonesia, is also important. The third trade route is regional, with Australia and New Zealand representing 20% of the market," explains the Competition Authority.

On the France/New Caledonia corridor, the median price has increased by about 30% in one year, but from China, rates have almost doubled. In its December 2020 notice, the Competition Authority noted that the importers interviewed insisted on the limited margin of negotiation available to them concerning maritime transport rates, "given the economic weight of shipping companies and their preponderant place on the market". The situation has not improved since. 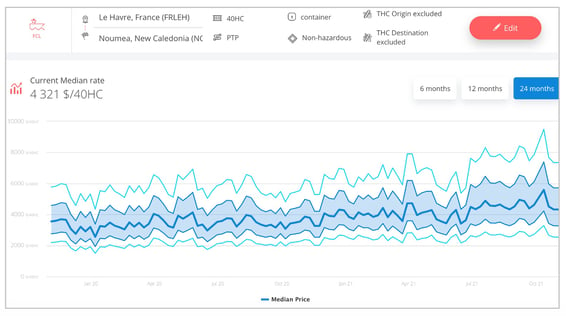 The Authority notes, however, that "even if the margins of price negotiation are limited, the rates applied on the principal direct lane to the mainland by CMA CGM from Noumea seem competitive compared to other territories that are nevertheless closer", in particular compared to Polynesia. This difference was also pointed out by the Polynesian Competition Authority in a September 2019 notice on import and distribution mechanisms in French Polynesia.

This has again been confirmed since then. In Polynesia, importers pointed out last September the impact of the rise in sea freight rates on the prices applied to the consumer, as well as the disorganization of services that penalizes the provision of products. The prices of maritime transport from mainland France have increased at an acceptable rate. On the other hand, from Asia, they have increased by more than 50% in one year. 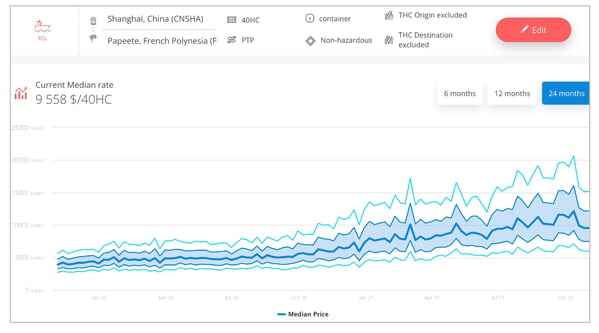 In air transport, we see the same pattern in the Pacific zone as that towards the DROM: a very clear increase in 2020 from the beginning of the pandemic and a stabilization at high levels in 2021. In Polynesia, the median price recorded at the end of October between the Mainland and Papeete stood at around €8/kg, an increase of 11% compared to October 2020 but a doubling compared to the same period of 2019. 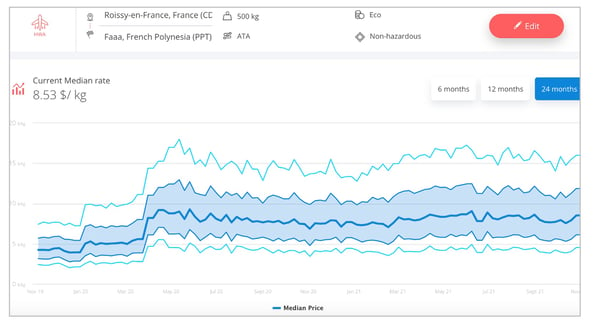 Evolution of prices Paris / Tahiti from airport to airport for a shipment of 500 kg of non-dangerous cargo. Source : Upply (11/5/2021)

The evolution is more or less identical to Noumea, with a fairly similar price level.

In the recommendations that conclude its notice of December 2020, the Competition Authority of New Caledonia evokes the possibility of a dose of competition in the face of the "de facto monopoly of the airline Air France", considering the first cargo flight made by Aircalin during the Covid in October 2020. In the event that the market is too small for two competing airlines, the Competition Authority recommends "a call for competition in order to select the most competitive airline through a call for tenders, given the success of the first cargo flight made by Aircalin in October 2020". However, it seems difficult to dispute the strength and seniority of Air France's expertise in this sector of activity.

(**) In the examples we use throughout this article, prices for maritime transport include freight rates, port handling fees, principal surcharges, fixed operator fees. However, we excluded THC. For air freight, prices include freight rates, airport handling charges, main surcharges, possible transhipments (for more information, consult our detailed methodology ). These estimates are based on actual transactions. When we incorporate new data, previous estimates may be revised. Those in this article were made on October 29, 2021.

Notice No. 19-A-12 of 4 July 2019 concerning the functioning of competition in Overseas France.

Notice No. 2019-A-02 of 19 September 2019 relating to import and distribution mechanisms in French Polynesia.