Special Report. Road freight transport in the Pays de la Loire region is in relatively good health, thanks to an economy which is dynamic and quite diversified but also to the presence of well-established small and medium-sized companies in the sector. Intra-regional traffic is dominant.

Road freight transport in the Pays de la Loire region has developed quite dynamically over the last five years by comparison with other French regions. In 2018, traffic totalled 21.6 billion tonne-kilometres, 6.6% more than in 2014, according to the 2019 regional economic report of French national statistical institute INSEE. The growth was largely driven by internal traffic (+27.8%), even if this traffic is lower than incoming and outgoing traffic in terms of tonne-kilometres. Third party transport represented 78% of traffic, compared to 22% for entities transporting their own goods. As in all French regions, traffic fell during the three years from 2014 to 2016 before starting to rise again after that.

To make a finer analysis, it is interesting to look at traffic measured in tonnes. In 2018, freight traffic transported in the Pay de la Loire by vehicles with an authorised loaded weight of 3.5 tonnes and over (excluding transit traffic, international traffic and foreign flag traffic) totalled nearly 180 million tonnes. That was 2.3% more than in 2017 but only 1.1% more than in 2015, according to the Pays de la Loire regional environmental, planning and housing department. Third party traffic was slightly down on 2017 but still generated 58.8% of all tonnage in 2018.

Intra-regional traffic represented 63.5% of the 180 million-tonne total, with 19% for traffic to destinations outside the region and 17.5% for traffic coming into the region. Inter-regional traffic increased 3.8% in 2018, with most of this traffic coming to or from the Pays de la Loire's three leading partner regions: Brittany, Nouvelle-Aquitaine and Normandy. Traffic with the Centre Val-de-Loire region stayed stable but traffic with all other French regions declined. 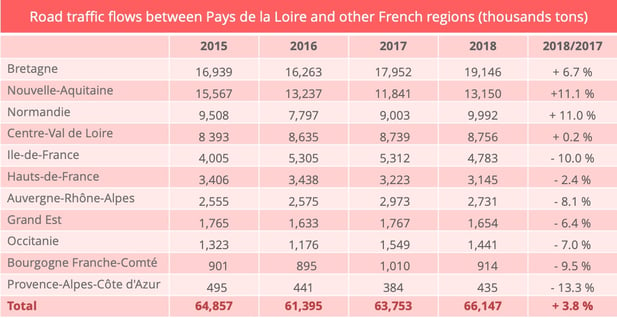 While the four leading regions in the table remain unchanged, we can see that Brittany has been steadily increasing its share of trade with the Pays de la Loire. Between 2015 and 2018, road freight traffic flows between the two regions increased 13%. Outgoing traffic rose 14% and incoming traffic 11%. Nouvelle Aquitaine stayed in the number two position but has seen its traffic fall since 2015. Outward flows were 16% down and inward flows 15%. Normandy, meanwhile, gained ground in traffic coming from the Pays de la Loire, with a 12% increase, but outwards flows fell. The Paris region, Ile de France, which lies in fifth place, was notable for showing good growth in both directions. Between 2015 and 2018, the flow of traffic from the Pays de la Loire increased 17%, while traffic in the opposite direction rose 22%.

The figures for 2019 are not yet available but INSEE's regional report shows that the trend is reversing. "In 2019, road freight transport, which accounts for 80% of all freight trade in the region, slowed down. Taking all flags taken together, the number of heavy goods vehicles counted at motorway toll stations increased 1.6% in 2019," INSEE said, "This is the lowest rate of growth recorded over the last five years." It explained this by "moderate growth in the agriculture, industry, construction and commercial sectors, which are road hauliers' main clients" (see our article on the logistical and economic profile of the region).

Clearly, 2020 is going to confirm this trend, taking account of the unprecedented crisis caused by the Covid-19 pandemic. "Several sectors important for our region have been affected, like the aviation and automobile industries," said Jean-Christophe Limousin, Pays de la Val de Loire regional delegate of the FNTR road hauliers' federation. "If the crisis results in long-term changes in behaviour, the impact on these sectors could become even worse. Despite all, the hauliers I meet are not pessimistic but rather cautious and combative."

The Pays de la Loire region showed remarkable resilience, moreover, during the first wave of the Covid-19 pandemic, with revenue loss and the number of inactive lorries markedly lower than the national average in May and June, according to the FNTR's study of the industry in the second quarter of 2020.

In September, freight volumes had returned to satisfactory levels but hauliers were experiencing heavy pressure on prices which is unlikely to diminish under the impact of the latest deterioration in sanitary conditions. "Structurally, the transport sector needs to have some excess capacity to be able to handle peaks in activity, given that demand is not necessarily steady," Jean-Christophe Limousin said. "In periods of economic regression, the situation is necessarily difficult to manage."

A region of transporters

According to the regional environmental, territorial planning and housing department, 2,145 companies were listed on the road hauliers' register in the Pays de la Loire on 31 December 2019. The figure has been relatively stable for the last five years. The Loire-Atlantique department accounts for the lion's share with 730 companies, followed by Maine-et-Loire with 489, Vendée with 394, Sarthe with 310 and Mayenne with 222.

A significant piece of information was provided by the 2019 report of the regional transport and logistics observatory: companies with less than 10 employees accounted for about half of all entities active in road freight transport, compared to 36% for those employing between 10 and 49 people and 12% for those employing more than 50. These figures reveal that road freight transport companies in the Pays de la Loire are bigger than the national average. With companies like Ambroise Bouvier, Ageneau, Groupe Antoine, Brangeon, Bréger and Mousset, the region is not short of standard bearers. "Our region is rich in sizeable transport companies in the small and medium-sized category," said Jean-Christophe Limousin. "At the moment, we are seeing the emergence of a new generation of industry leaders, who have often attended business school before returning to take charge of the family business filled with ambition. This is very encouraging for the sector's future."