In October, air freight volumes again came close to record levels. Traffic is tending to stabilise, however, despite the start of the peak season, which, unusually, has limited rate increases.

"Despite the start of the peak air cargo season, there was only a marginal uptick in air cargo volumes growth in October," the International Air Transport Association (IATA) noted in its latest monthly traffic analysis. The sector is nevertheless still ahead of pre-pandemic levels. Traffic in tonne-kilometres rose 9.4% in October by comparison with October 2019. Its performance was similar to that of September (9.1%), however, and has been "fairly constant for the last six months or so", according to IATA.

Seasonally corrected data shows that the October result was just 0.1% ahead of that of September, which confirms that the catch-up effect after the slump experienced in 2020 manifested itself mainly in the first half. We can see, too, that there has been a certain levelling out of peak season traffic flows after shippers tried to order early to take account of disruption in the supply chain. 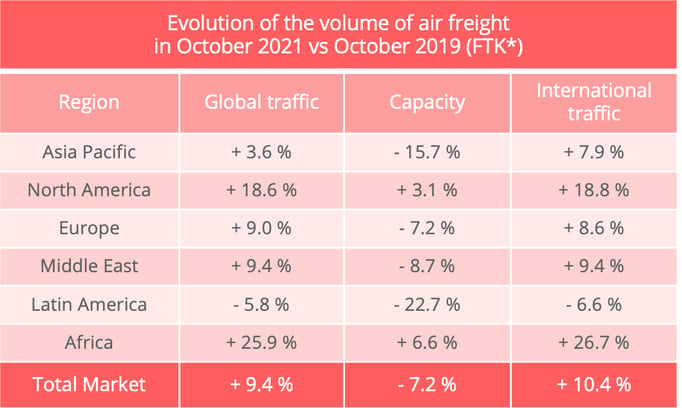 On the capacity front, the trend is also favourable. "Cargo capacity improved for the second consecutive month in October, with global available cargo tonne-kilometres (ACTKs) down 7.2% versus pre-crisis," IATA said. On a seasonally corrected basis, capacity was up 1.3% on September, "largely driven by improvements in Asia Pacific (4.7%) and Europe (2.0%)", according to IATA.

The improvement in capacity is "entirely due" to the availability of additional hold space in passenger aircraft or "preighters", which is to say passenger aircraft temporarily converted for use as cargo carriers. Available hold capacity is still a long way short of what was available before the pandemic but the situation is improving, since the gap between 2021 and 2019 narrowed from 37.9% in August to 30.7% in October.

That said, the air transport sector remains extremely vulnerable. Following the appearance of the Omicron variant, a number of countries have announced drastic travel restrictions. This should lead to a significant deterioration in air freight capacity from the end of November, which is to say at the height of the peak season. "Restrictions will not stop the spread of Omicron", said IATA director general Willie Walsh. "Along with urgently reversing these policy mistakes, the focus of governments should be squarely on ensuring the integrity of supply chains and increasing the distribution of vaccines."

The airlines are faced with serious difficulties, then, in their passenger transport activities. In the freight sector, however, economic and sanitary conditions are favourable to them in terms of the balance of power with other transport modes.

It is true that, with the congestion affecting logistics chains and shortages of inputs and labour, we can say that several factors are acting together to create problems in the production sector. For the time being, however, demand is sufficiently strong to enable the air freight sector to benefit from these problems. For nine consecutive months, air freight volumes have been progressing faster than world trade. This is a classic situation in a period of economic recovery but it aggravates the overall disorganisation affecting logistics chains, particularly shipping.

"This is likely to continue over the next few months for several reasons," IATA said. "Key year-end consumer events such as Christmas and Black Friday mean businesses need to ensure they have sufficient stocks of goods on hand. The US inventory-to-sales ratio, which was 8.8% below 2019 levels in October, indicates that many firms do not have those stocks, giving them incentives to turn to air freight to rapidly meet demand. Even if demand was to fall after those events, firms would still need to restock."

After strong growth in 2020 and early 2021, air freight rates calmed down somewhat during the Spring, even though they remained at a high level. The start of the peak season is a favourable time for new increases, however. "The urgency of demand for air cargo, and the lack of capacity, mean that air cargo rates have been on the rise for four consecutive months," IATA said. "In October, SA (seasonally adjusted) rates, including surcharges, rose by 3.3% month-on-month, and were above the May 2020 peak."

Despite this, air freight remains competitive. Figures from Upply's data base, which include spot and contract rates, show that increases have been kept to reasonable levels if rates negotiated over longer periods are included. Air freight has closed the gap, moreover, between it and the shipping sector, where rates have soared, even if the rise in ocean freight rates has slowed since October. 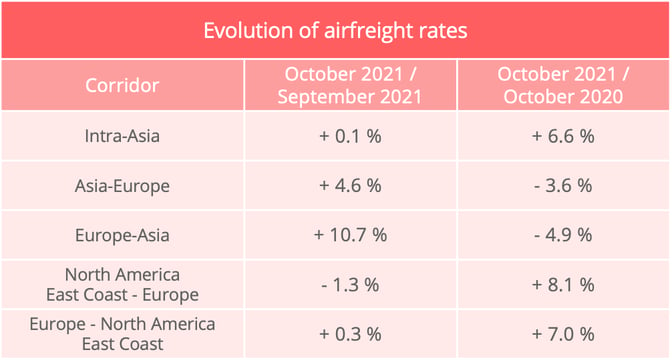 Source: Upply - NB : These estimates are based on real transactions and, therefore, represent a mixture of spot and standard rates. The changes shown can, therefore, be revised over time as new data is included in the data base.

We can nevertheless expect rates to overheat during this end-of-year period. Already in November, first estimates from our Upply data base show that rates are higher than they were at the same point last year on virtually all major routes and, particularly, on Asia-Europe routes (9.4%).

Restrictions on flights as a result of government decisions in the fight against the spread of the Omicron variant, are going to increase the air freight rate inflation trend. These restrictions are occurring at a crucial point in the peak season in terms of demand. As they face a possible further fall in passenger traffic just as it is slowly recovering, it is in the airlines' interests to take advantage of the revenue-generating potential offered by the freight sector.