Road transport in France : the 2021 results in figures

The Bank of France and the Comité National Routier (CNR, National Road Transport Committee) have just published new data which confirms that the road transport sector recovered in 2021 prior to the return of major new uncertainties. 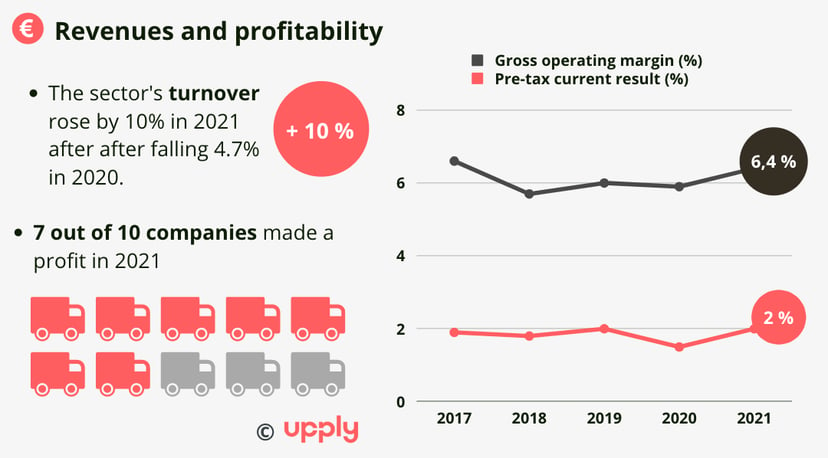 The French road transport sector, like the economy in general, recovered in 2021, showing a 10% increase in revenues after the disruption caused by the Covid-19 pandemic in 2020. It did not totally recover the revenues it lost during the crisis, however, as is revealed by the new Economic and Financial Panorama of Road Freight Transport, which was presented at the annual conference of the FNTR (Federation Nationale des Transports Routiers) road hauliers' federation on 22 September 2022. Another warning note was given by Carine Jupin, the Bank of France's regional director for northern France, who revealed that, while eight out of 10 companies saw their revenues increase, 15% of companies saw their revenues fall in both 2020 and 2021.

Profitability also improved in the sector. Gross operating margins returned to their pre-crisis level, closing in 2021 at 6.4. Last year, companies succeeded, therefore, in passing on the increase in the price of diesel fuel, which, according to Caroline Jupin, rose by about 15%.

Current account pre-tax results also rose, improving by 0.5% in relation to 2020, but profit margins were low and 30% of companies were in the red.

Against a background of rising prices, vigilance is required, therefore, particularly since the general economic situation is deteriorating. In the face of the uncertainty, particularly over energy prices, the Bank of France presented several possible scenarios for the economy in 2023. The most optimistic of them foresaw growth reaching 0.8% but the most pessimistic predicted a 0.5% recession. For transport companies next year, therefore their ability to pass on cost increases will be crucial.

On 21 September, the CNR published the results of its annual long-distance haulage survey for 2021. 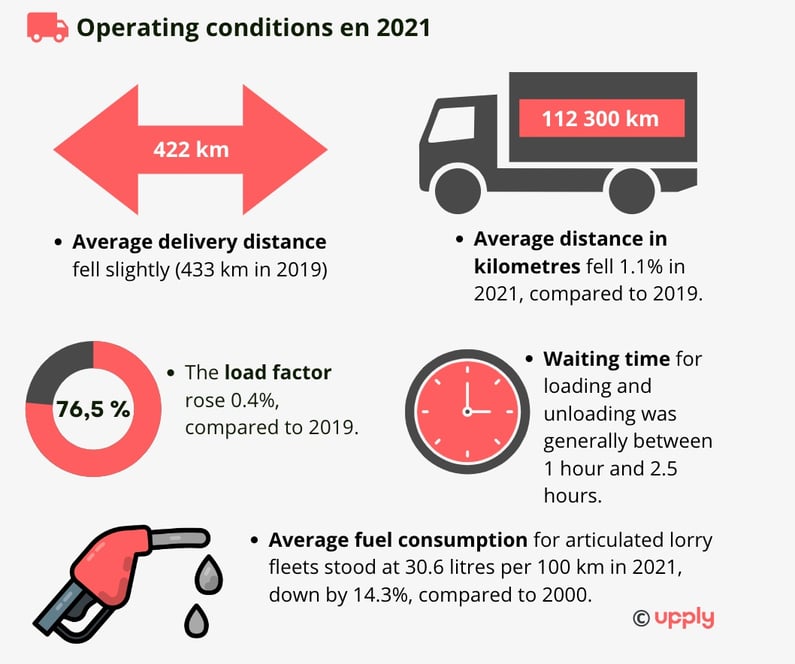 According to the survey, the average annual distance covered in kilometres per vehicle fell slightly between 2019 and 2021, while the load factor rose 0.4 points. "The vehicle production indicator, which is calculated according to the annual distance covered in kilometres and the load factor, fell, therefore, 0.7%, between 2019 and 2021", the CNR said, adding that the reduction had a greater negative effect on small companies with 0 to 19 employees (-0.4%). In the long term, we see that average activity in the articulated, long-distance lorry fleet calculated over the period 2009-2021 was 7.4% down on the average for 2000-2008. "For many years, transporters have been trying to refocus their businesses on regional and domestic transport in an attempt to find pockets of profitability which are harder to find on very long distances. Since 2007, average delivery distances have regularly diminished. They fell 28.6% between 2007 and 2021", according to the CNR.

Another major long-term development is the reduction in fuel consumption, even if the 2021 survey shows a slight increase in relation to 2019 from 30.3 to 30.6 litres per 100 km. This was the result of an increase in the proportion of Euro VI vehicles, which represented 91.5% of the long-distance tractor fleet in 2021.

(*) The 2020 survey was cancelled because of the Covid crisis. (**) Costs based on the total number of kilometres covered. Data source: CNR's 2021 long distance haulage survey, September2022.

The results of the 2021 survey "show that inflation in 2021 was unprecedented in its scale and range," the CNR said. All cost components were affected by increases, particularly fuel, and this weighed heavily on operating costs. The most spectacular cost increase - 61% - was for the additive, Adblue, although this only represented 0.4% of average total vehicle operating costs.

The sudden recovery of the economy after the first phase of Covid-19 led to high inflation in the cost of raw materials, components shortages and the disorganisation of supply chains. This had an impact on the cost of tyres but also on the price and availability of vehicles. Over 10 years, the cost of purchasing a new tractor increased by 22.2%.

Personnel costs also followed an upward trend. Driver pay rose 2.7% in two years and travel expenses by 4.4%. Average monthly pay stood at €2,659 for a full-time, long-distance driver in 2021. Over 10 years, it has risen 11.3%, representing an annual average increase of 1.1%, according to the CNR.

The inflationary trend persisted in 2022, particularly where fuel was concerned. There was also strong pressure to increase pay, while the shortage of drivers worsened.

[1] Since 2000, the Comité National Routier has carried out an annual survey of the long-distance general freight activities of French companies acting for third parties. The aim is to assess the operating costs and conditions of long-haul lorries. The data presented in the survey concerns only diesel-powered articulated tractors and trailers carrying out long-distance work and not the whole group of companies interviewed. The 2020 survey was cancelled because of the Covid crisis.

[2] For the 2021 survey, the CNR carried out interviews during the 4th quarter with a representative panel of 220 companies. The panel was made up of French companies which are engaged in long-distance transport for third parties as a main activity, using their own transport equipment.