Road transport in France: transport prices down by 0.25% in February

Road freight transport rates in France fell in February, but in rather lower proportions than expected. The sector's strong performance can be explained by the context of a pre-crisis for the Coronavirus.

The fall revealed by our monthly Upply barometer for road freight transport in France in February is lower than expected. After a January that was shaken by the blockade of French seaports, we entered a highly stressful period of pre-crisis for the Coronavirus: we watched from afar as the fever spread in China and then came closer and closer to us through Italy without really understanding what was happening, or what was going to happen.

We could have legitimately expected a drop just as substantial as that of the previous month, because the flow to and from the ports had been reduced owing to the lack of delivery of goods from the Far East and consequently a lack of containers to dispatch.

But the following graph shows a less disrupted curve than expected, even if the trend remains downward. 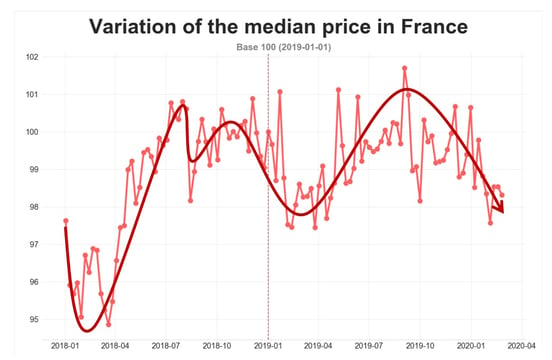 The statements that we have collected from several French carriers do indeed indicate a month of February that is more consistent than was expected and with satisfactory financial results. Food distribution has meant that traffic was on the rise, perhaps due to a certain anticipation of the crisis to come. The business climate, during the month of February, was also showing a raise (see the table at the end of the article).

At the same time, the Coronavirus epidemic has had the collateral effect of greatly reducing China's need for oil, which, combined with political tension, has led to a fall in prices. In any case, the reduction of diesel prices by almost 5% and the stability of other transport costs will have been a welcome respite for our national carriers and their margins

Hopefully, this lull in February will have allowed them to set aside reserves to help them face the Covid-19 ordeal, as they have now been caught up in the storm. However, we, as citizens and consumers, need our carriers more than ever.