Road hauliers saw October 2020 prices fall 0.4% against those of the previous month on the French market, according to our Upply barometer. The modest recovery which had been in progress was obliterated by the new public health measures.

The transport price graph showed a slight 0.4% fall in October. This reduction, which we predicted in our previous monthly analysis, marks the end of a period of virtual price stagnation.

The graph, below, which shows the weekly variation in transport prices in France, indicates that, since May, prices have oscillated inside a "tunnel", varying by around 1.65 points up or down (with one exception) around a central value of 97.7. More than 70% of values stayed within a range of around 0.95. 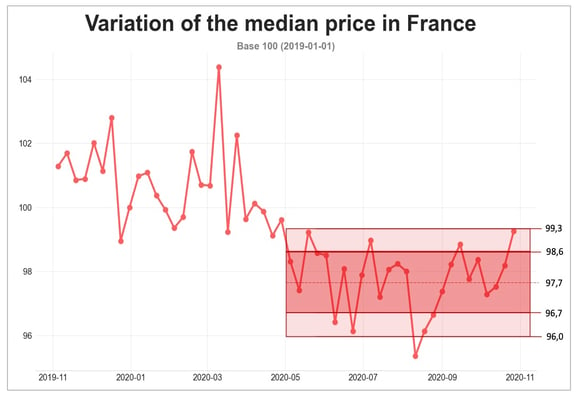 The inflation seen from week to week in October, which is represented by the final four points on the graph, could give the impression that we have reached a new floor level in the movement of road transport prices on the French market. In fact, however, freight rates should not rise any higher and the "tunnel" we referred to is very probably just a plateau preceding a return to the previous downward trend.

The graph also shows that prices in September and October figure in the upper part of the tunnel and are much less volatile. This phenomenon is much less marked in France but is stronger in neighbouring Germany and Poland, where it is referred to as the "delayed recovery".

The end of the "delayed recovery"

The delayed recovery concept can be seen in the catch-up process which took place in consumption and production after growth was halted by the lockdown and then slowed down again by the summer holiday period.

This additional activity can be seen at two points on the weekly price variation graph at the end of August/early September and in October. In the Upply data base, we recorded a peak in transaction activity among our partners, which reached 110 in September (base 100), which is to say a greater number of transactions than in the pre-crisis period. In October, however, the figure had already dropped to 95.

The fall in the number of transactions in October matches the business climate trend, which began declining again in October (-1.7%) after increasing for five months (see the table at the end of the article). The business outlook is more sombre compared with last month," said French national statistical institute INSEE. "The decline is marked in services, particularly accommodation and restaurants, a sector badly affected by the public health protection measures. The decline is more moderate in industry. In retail trading, the business climate is stable. The business outlook as reported by heads of construction companies also stabilised."

In its note on the economic situation at the end of October 2020, the Banque de France confirmed this. "In the month of October, activity was little affected in most sectors," it said. "The outlook for the month of November shows a downward trend, mainly in services…Altogether, the decline in activity in November will be more differentiated and less extensive than in the first lockdown. We estimate that the reduction in GDP (in relation to the pre-pandemic level) will be -12%, compared to -4% in October and -31% in April."

The curfew introduced on 17 October in the Paris region and eight other major population centres and then extended on 24 October to 54 departments had an impact on the total number of transport operations and, effectively, put an end to the delayed recovery period.

The lockdown, which was imposed throughout the country on 30 October, will result in a significant fall in demand for transport, probably in all sectors except in essential activities like pharmaceuticals and foodstuffs. At the same time, however, and contrary to what happened in spring, this lighter form of lockdown will not cause a fall in transport capacity, at least not initially. National and international transporters are very much in activity and the expected peak arising resulting from preparations for the Christmas holiday period may not be enough to ensure that supply and demand are balanced.

As a result, transport prices should fall more markedly in the final quarter with a negative impact on companies' liquidity. This can be expected to further encourage the consolidation already in progress in the road freight transport sector.