MONTHLY BAROMETER. With a further increase of 4.4% in April compared to March, according to the Upply Freight Index, road transport prices in France have never reached such heights. A trend mainly linked to the impact in April of March’s increase in diesel prices.

The re-election of President Emmanuel Macron has reassured our European partners and the country's economic actors and also those in the Old Continent. However, the sky is darkening and the French economy, which has outperformed for several months, is in turn caught up by the unfavourable economic climate. Between January and March 2022, the country's gross domestic product (GDP) remained stable on a quarter-over-quarter basis whereas it had increased by more than 7% over the same period in 2021. At the same time, household consumption fell sharply, down by 1.3% compared to a rise of 0.6% in the previous quarter.

However, these factors have not yet led to a sufficient slowdown in activity to drive down road transport prices. In April, the crazy rise in prices continued and even accelerated in unprecedented proportions: between March and April, road freight rates in France increased by 4.4% according to the Upply Freight Index (UFI Road France). This can be explained in particular by the impact in April of the soaring energy prices in March, given the delay induced by the knock-on mechanism. 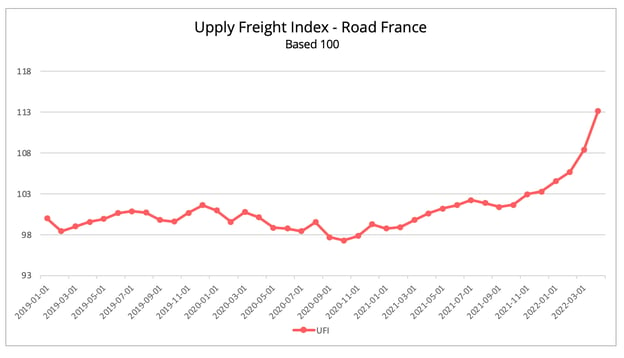