In a market seriously affected by the COVID-19 outbreak, road freight transport rates in France appear to be frozen (+0.05% compared to February). A flat curve that hides acute disparities. The fall in demand and also that in supply are making prices danse around to reach unheard-of extremes!

Our monthly Upply barometer for road freight transport in France shows what appears to be unchanged price rates in March 2020, compared to February 2020. The situation looks like it has been a carbon copy of the previous month, it is almost as if the last week of March (first week of total lock-down due to the coronavirus epidemic), which showed a strong demand for the transport of critical products and a collapse for the rest, had not existed. 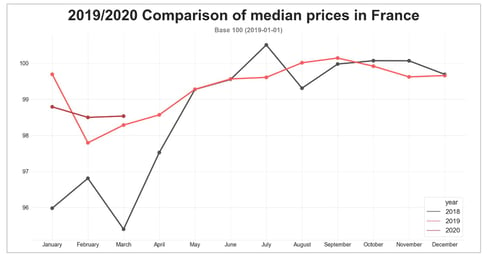 Behind this deceptive curve are hidden, in truth, several notable facts.