MONTHLY BAROMETER. Road transport prices in France rose again in February as shown by our Upply barometer. All the ingredients are in place to keep inflation high and sustainable…

February was a month of stupefaction. It began with a dynamic feeling at the end of the fifth wave of Covid-19. The spike in infections was behind us, the economy could resume its forward progression, driven by demand.

And then on February 24, the news came: Russian President Vladimir Putin launched the invasion of Ukraine. Russian forces began bombing cities as well as civilian and military air bases. A real war between two countries, for the first time since the Second World War.

The very short-term consequences of the war in Ukraine on the road transport economy in Europe and France will be the interruption of services, the soaring prices of raw materials and transport capacity in general.

Under these conditions, road transport prices continued to rise. They increased by 0.5% compared to the previous month according to the Upply Freight Index (UFI Road France). 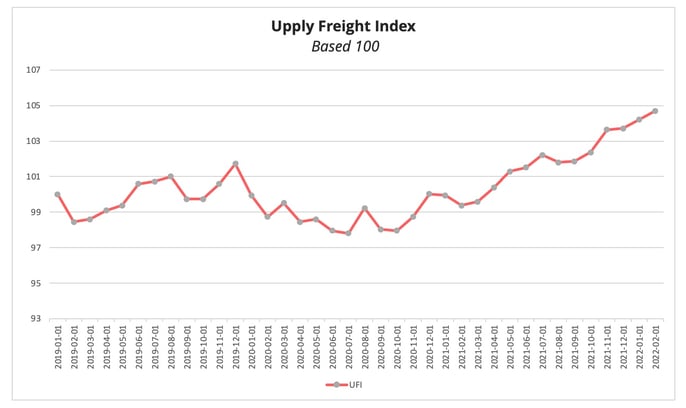 This increase was of course expected. As we wrote in the January barometer, energy prices are the main driver of transport cost inflation and they are passed on with a one-month lag. Given the surge in diesel prices in January, this logic prevailed.

is reinforced by the pressure on wages, in a context of inflation and a shortage of drivers. The agreement reached between the employers' organisations and the trade unions during the 2022 mandatory annual negotiations stipulated a 5% increase in the conventional salary scales on the 1st of February and a 1% increase on the 1st of May.