Trans-Pacific US East Coast ocean freight rates are still solid, unlike those on the main Asia-California trade lane. Captain Upply gives us his analysis in our Line of the Week section.

In the trans-Pacific trades, the year 2019 now ending has been marked by sharp rate reductions on the major Asia-California trade lane. Rates are currently 45% down on what they were at the same point last year. During the last months, the port of Los Angeles has failed to repeat its exceptional performance in 2018 in terms of cargo volumes handled.

The trans-Pacific US East Coast trade via the Panama Canal has held up much better, with restricted transport capacity, adjusted passage fees on the Panama Canal and little volume lost to rail "Landbridge" services. 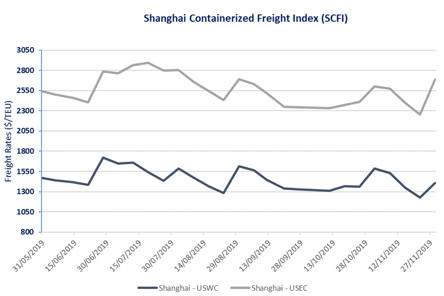 The trans-Pacific played a significant role in the record traffic figures recorded by the port of New York. Watch out, however, for the impact of IMO 2020 from December on. Given the great distance covered in nautical miles via the canal, this line can be expected to be most affected by IMO 2020 surcharges.

If the existing imbalance between West Coast and East Coast rates, which currently stands at more than 1,000 USD/40', persists too long, massive modal switches to coast to coast rail services via Chicago can be expected.