The impact of the coronavirus on the economic outlook for 2020

At the beginning of the year, international organizations were still expecting an improvement in growth for 2020 compared to 2019. The coronavirus epidemic is turning the game upside down. Beyond the economic consequences, this crisis calls into question the current organization of supply chains.

"The truth is that uncertainty is becoming the new normal." This observation by the International Monetary Fund, made at a time when the coronavirus epidemic is raging, speaks volumes about how difficult an exercise economic forecasting has become today. Health crises are just one of the many parameters that are likely to influence growth.

The coronavirus crisis has turned these forecasts upside down. On March 4th, the IMF and the World Bank finally announced a lower growth for 2020 than 2019, without specifying a figure. The OECD is also pessimistic in their interim report published in March 2020. It shows estimates in its baseline scenario that the Covid-19 epidemic will cause a -0.5% contraction in global growth, which will be brought it down to 2.4%. But if the epidemic is more enduring and affects North America and Europe, then global growth could be limited to 1.5%. 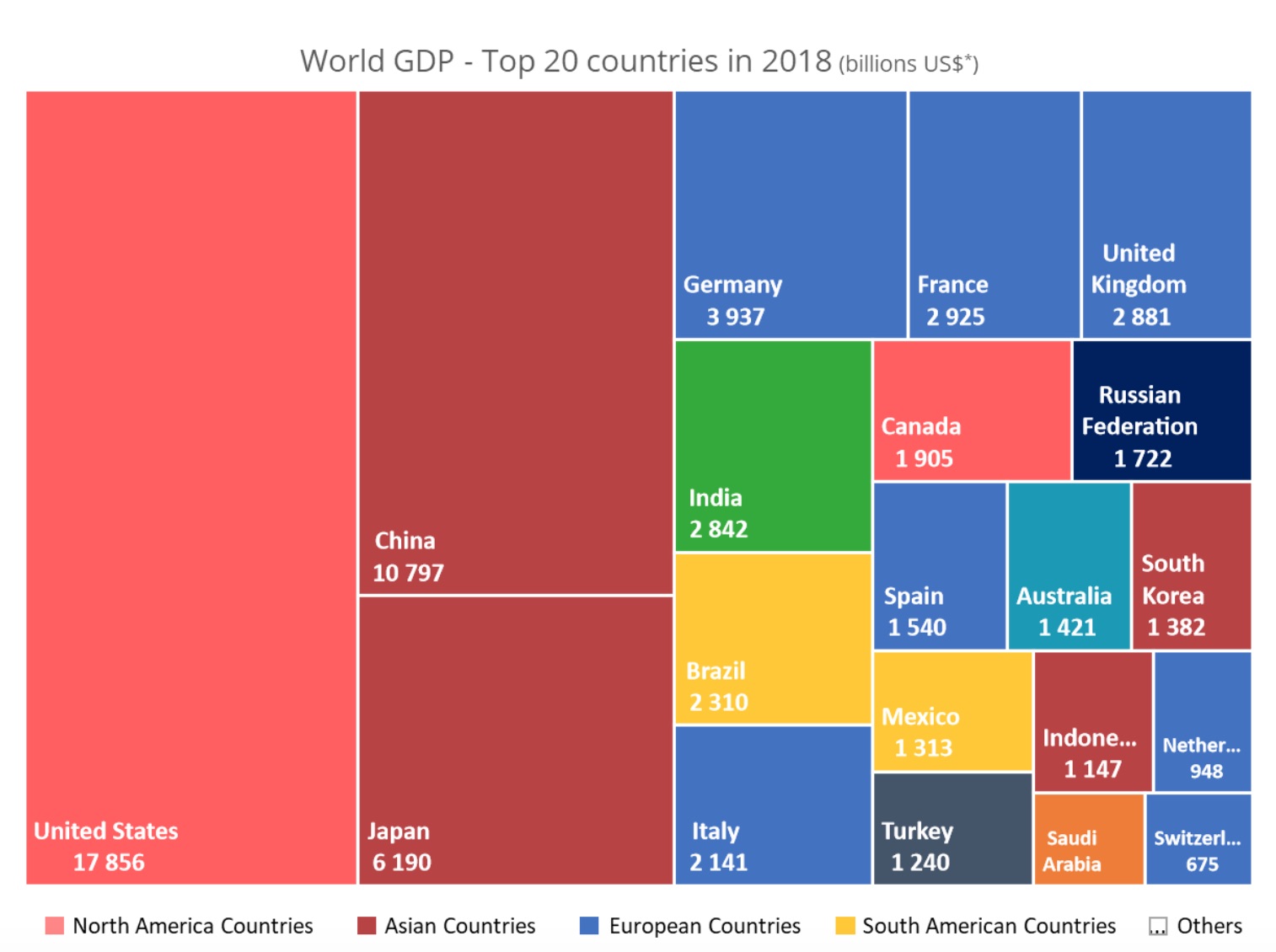 In fact, the top 20 world economies (see graph above) are now highly dependent on their interactions with China. Consequently, any risk factor having a significant influence on the economic situation of these countries has undeniable consequences on global growth. And clearly as of today, we have already reached this point ...

Highlight on the strategic role of the supply chain

In China, the phenomenon of quarantining millions of people to limit the pandemic has halted economic activity. The world stock markets have declined sharply, with a risk of financial crisis, and companies are starting to feel the impact of the slowdown in consumption or disruptions in the supply chain in their results for the 1st quarter of 2020.

The shutdown of Chinese factories has caused a breach in the supply chain for sectors with limited inventories. An example of this is in the technology and semiconductor sectors (with a 50% drop in cell phone sales to be expected in the first quarter, according to some analysts) or even the textile sector. The automobile industry was also hit hard because the Wuhan region, the site of the initial outbreak of the coronavirus, is a cradle of this industry in China, as it is home to both manufacturers and automotive suppliers.

From the European point of view another factor is even more worrying: the discovery that 80% of the active ingredients in certain basic drugs come from China or Asia. The coronavirus crisis has therefore brought to the fore the question of the strategic dependence of certain industrial sectors in terms of supply. In France, the Minister of Economy and Finance, Bruno Le Maire, has announced his intention to take measures to confront this risk, citing in particular the need to rebuild the production capacity of active ingredients for medicines in France and Europe to eliminate dependence on supplies from China.

Until now, the ecological cost has been the main argument against outsourcing production to distant countries with low production costs. Economic independence could also be a solid argument in favor of this view. The reindustrialization of key sectors of the economy and the “nearshoring”, that is to say, the reduction of the distance between places of production and places of consumption, should become hot topics. The phenomenon has already started to take place in certain sectors in recent years, notably due to the increase in wages in China. But this time, the alert is of a completely different magnitude.

The coronavirus outbreak highlights another unprecedented phenomenon: the economic isolation of a region with a developed industrial fabric. The health emergency had the almost immediate consequence of a suspension of air links for passenger traffic but also in some cases for cargo flights. According to the latest estimates from the IATA, losses for air transport could reach a staggering $ 113 billion. Tourism and the hotel and restaurant industries are also among the sectors that have been hit hard. The shortfall, linked to the absence of Chinese tourists, is estimated at 10 billion dollars this year for the United States.

Maritime traffic was also hit by the slowdown in production. Sea-intelligence estimates that the shortfall for shipping companies is in the range of $ 300 to $ 350 million per week. A slowdown or prolonged shutdown of production plants poses a direct threat to the flow of trade.

Contagion to the world economy

The slowdown in the Chinese economy can be illustrated by Markit / Caixin's estimate of the Purchasing Managers' Index in the manufacturing sector. As can be seen the manufacturing PMI for February 2020 is 40.30 compared to 51.10 in January and is at its lowest level since the financial crisis of 2008!

At a global level, if the outbreak continues, there is a real risk of crisis due to the scarcity of supply.

In terms of the stability of the financial system, the central banks have already said that they begin to intervene in a coordinated manner and they are preparing exceptional measures to support the economy. The People's Bank of China has already announced measures to support its economy, and China has allocated more than $ 16 billion to fight the spread of the coronavirus epidemic. Several governments have also announced action plans and budget support for their health systems, but also for the economic fabric (credit to SMEs, reduction or deferral of taxes and charges). In the longer term, consumer support measures may also need to be considered when the worst of the crisis is over.

Lessons to be learned

Despite the alarming context, one should not give in to panic. The major economic issue is the negative impact of containment and reduced mobility of populations, which can only be episodic. The end of these drastic measures should allow a deferral of consumption to May-June and a recovery of the economy in the next two quarters, even if, undoubtedly, the impact on the economy will be proportional to the duration of the epidemic. However, the tourism and transport sectors will find it difficult to make up the losses of the first two quarters.

Lessons must however be learnt from this health crisis: protect the income of one's business from the various risks by using financial mechanisms and spread the operational risk. The risk has clearly been brought to light through a health crisis. However other factors exist: trade tensions between states, climatic events, war and terrorism.

The precautionary principle dictates better insurance against the risk of volatility in the price of raw materials and also diversification of the supply chain. The business management model could move from a vision of seeking cost optimization to that of a balanced distribution of sources of supply, and also locating the means of production and distribution networks as close as possible to consumers. A winning strategy for long-term development could be based on fixing growth objectives by geographical area and combining them with a global vision. In this way the acceleration of the nearshoring phenomenon would allow an overhaul of the productive apparatus whose economic profitability could be ensured by the gains in competitiveness brought by technological innovation rather than through offshoring.