The resurgence of Coronavirus and its impact on Europe-Asia trade

Starting in July, we have witnessed a resurgence of COVID-19 in Asia and Europe. The growing infection rate in Asia, the global export powerhouse, poses concerns for global trade.

Global trade is still being deeply affected by the Covid-19 pandemic. This article first takes a comparative look at Australia, Japan, and China, which adopted different action plans and then analyzes how these different strategies can affect the Asia-EU trade. 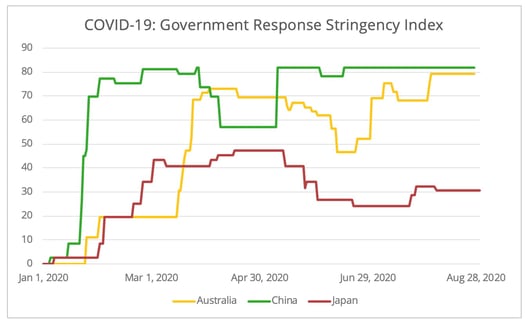 Manufacturing activity in the face of resurging cases 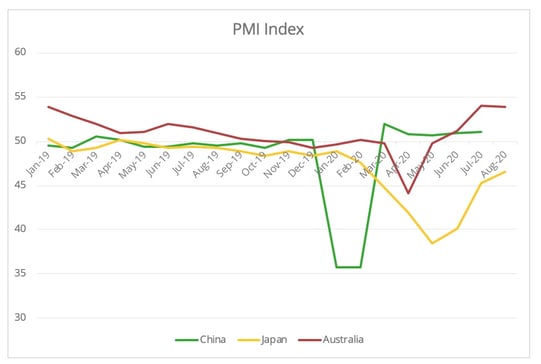 In China containment measures have a greater impact on imports than exports. Following the repeated detection of the virus on frozen food packaging, the Chinese government temporarily banned meat from suppliers in several countries, including Germany. A strict examination and disinfection procedure of reefer containers has been put in place, resulting in congestion and detours in shipping to Chinese ports. Considering that the EU is China’s largest meat supplier, this may particularly affect reefer shipping from Europe to China. Apart from the impact of the first wave, other concerns have generated a growing Chinese demand for cereals from external suppliers. For instance, France has become a popular source for grain and is likely to remain so during the first half of the 2020/2021 season, especially in light of the dispute between China and Australia.

In August, Japanese manufacturing activities showed their smallest contraction since the pandemic, despite increased number of cases and an external market which continued to contract. The struggling European automobile sector, which accounts for 1/5 of Japan's exports to the EU, undermined trade between the two parties. A certain warming up of the steel manufacturing sector in Japan signaled the recovery of the Japanese automobile industry in the third and fourth quarters, though figures are still below pre-pandemic levels. However, the draconian restrictions on foreigners entering Japan may worsen the existing labor shortage problem in Japanese manufacturing sites.

Australian manufacturing activity in August remains in expansion, despite the State of Victoria being under strict lockdown until September 13th. However, as the State of Victoria is the second-largest red meat producer in Australia, this sector’s exports will be significantly affected, and the State has now decided to reduce by one-third the labor force at facilities at any given time. The monthly export volume of Australian red meat in July and August experienced a year-on-year drop of over 20%. Since the main destinations for Australian red meat are the US and Asia, the EU may not suffer a reduced meat supply because of this situation. However, the EU may benefit from trade diversion: the reduced supply from Australia could cause Asian importers to seek alternative suppliers. For instance, this could be the case for Japan, especially as it lifted all import restrictions on French beef this August.

Of course, the recovery across sectors also remains asymmetrical. According to the WTO's global trade barometer, the trade in electronic components and agricultural raw materials in the second quarter shows a noticeable rebound, while the automobile sector continues to lag. A similar pattern can be seen in European industrial production. The rebound of manufacturing activities in the electronic machinery sector in the EU could generate a growth in demand for intermediate products from Asian manufacturers in the second half of the year. This could benefit some of the EU’s Asian trading partners in the sector, such as China, South Korea, and Vietnam.

As for retail, the EU’s June trade volume had climbed back to February’s level. However, the textile and apparel sector, for which Asian countries are the main exporters to the EU, remains below pre-pandemic levels. Furthermore, the increasing unemployment rate in the EU, from 6.5% in March to 7.2% in July, will affect consumer purchasing behavior.

The impact on shipping on the Asia-Europe trade lane

The analysis above indicates that though the resurgence of cases in Asian countries has affected trade facilitation and manufacturing capacity to some extent, changes in European demand set the tone on the Asia-Europe trade lane in July and August. The recovery of European demand since July has meant stable but high ocean freight rates on the Asia-Europe Westbound route.

In the meantime, the recovery in ocean shipping demand did not have a negative effect on the China-Europe railway, which had benefited from the disruption in ocean freight during the first wave and this success was not just "a flash in the pan." In July, the shipping volume (in TEUs) of the railway Eastbound (Europe-China) increased by 65% and Westbound (China-Europe) by 79% compared to July 2019.

However, the congestion at the China/Kazakhstan border (in Alashankou and Khorgos) and Poland/Belarus border (in Małaszewicze) in June and July suggests that the railway shipping infrastructure there may have reached saturation. The Chinese National Railway Administration ordered Chinese operators to temporarily suspend lines to Central Asia and the provisionally-added lines to Europe at the end of June[1].

The reduced exports of Australian red meat could generate a reduction in demand for reefer shipping to its major markets in Asia and North America, but also contribute to a growing demand for Eastbound reefer shipping from Europe to Asia. While we may expect growth in the flow Eastbound, reefer shipping may be subjected to more uncertainties in the months to come. As well as China, the Philippines has also joined in banning imports of some chicken products from Brazil. Whether other countries adopt a similar approach for reefer container examination and/or a temporary ban of some imported meat must be kept in consideration.

Essentially, the way in which countries cope with this new spike in cases in both Asia and Europe will greatly affect Asia-Europe trade. On top of the pandemic, on-going China-US tensions will continue to pose challenges to global trade which the EU will not be able to affront alone. As such, while the WTO suggests that the worst-case scenario for 2020 will probably be avoided , an “L” shape trajectory cannot be ruled out.

[1] So far there are no updates on whether the temporary suspension has been lifted or not.