Coronavirus: an asymmetrical recovery which unsettles the supply chain

The Covid-19 epidemic continues to spread around the world, despite a certain respite in China and Europe. A complex situation to manage, especially in sectors dependent on global logistics. The recovery promises to be asymmetrical, both regionally and by industry.

On July 7th, the EU published its summer forecast, which suggests “a deeper recession and wider divergence across EU” in the second half of 2020. Italy, Spain, Croatia, and France have the most severe forecasts for GDP contraction, each at more than 10%. Germany, Poland, and the Scandinavian member states are among those that have been least affected by the pandemic. This is particularly the case for Poland, which has the lowest rate of contraction among the member states: 4.3%.

The intra-European market is highly integrated and one country’s slow recovery will have a spillover effect on other member states, particularly for those with economies that are export-oriented. This uneven recovery between states is due to their asymmetrically recovering industries.

This disparity in recovery is also occurring globally. Based on the World Bank’s forecasts, East Asia and Pacific is the only region that will avoid a recession in 2020, with a regional GDP growth of 0.5%. This is driven largely by a forecasted 1% GDP growth for China. Vietnam is anticipated to have the most resilient economy in Asia, with an annual increase of 2.8%. The entry into force of the EU-Vietnam free trade agreement, on August 1, could provide an additional boost, even in the context of Covid-19 pandemic. However, the EU’s largest trading partner, America, is expected to suffer an annual fall of 6.1%, though there should be a gradual recovery in the second half of the year followed by a 4% rebound in 2021.

Industrial sectors have shown different degrees of resilience to the pandemic in the first half of 2020. The EU’s industrial production index shows that on top of the surge in the pharmaceutical industry, the EU’s office machinery manufacturing sector has also performed well in the first five months. This is linked to an increased demand triggered by teleworking and online schooling following lockdown.

In contrast, some of the hardest-hit sectors in Europe are automotive, textile and electronic machinery manufacturing. However, with the easing of lockdown measures a rebound has been observed in May (figure 1). One common feature among these sectors is an integrated globalized supply chain, making them more vulnerable to global incidents. Their labor-intensive nature will also mean a difficult road to the resumption of production owing to the implementation of containment measures. 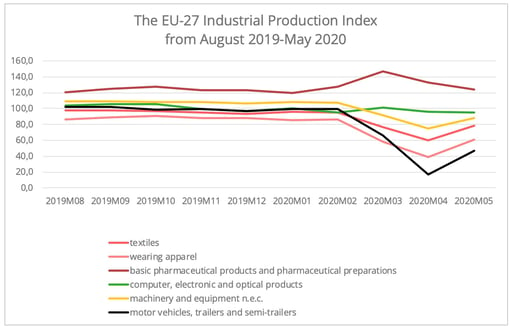 Let's focus now on the automotive and textile sectors, which have a vital effect on transport volumes.

Focus on the Automotive sector

The automotive industry is one of those most heavily hit globally. In May, despite a sharp rebound its industrial production index was inferior to the 2008-2009 financial crisis’ all-time low.

Its market is, however, split (figure 2), and shows an uneven recovery. For the European automotive sector, intra-EU trade accounts for around 70% of the total [1]. Despite a significant increase in new passenger car registrations in Europe from April, figures remain 50% lower the pre-pandemic figures of February 2020. According to the European Automobile Manufacturers' Association, EU car sales for 2020 are expected to have plummeted by 25% compared to 2019.

Demand coming from its two major extra-EU markets, China and the US, is also recovering asymmetrically. Both countries are expected to be in recession, but forecasts in April by IHS Markit predict that the US market will suffer a deeper contraction of 26.6%, in comparison to that of China of around 15.5%[2], thanks to its earlier rebound. In June, sales of new cars in China showed a year-on-year growth of 11.6%. This upward trend coincides with that of certain manufacturers’ quarterly financial reports. For instance, BMW has reported a second quarter sales growth of 17% in the Chinese market in comparison to 2019, in sharp contrast to its more than 40% decline on the US and European markets, Daimler is showing a similar pattern. Strong growth in truck sales can also be observed, with a year-on-year surge of over 72.6% in June, coinciding with a strong Chinese policy emphasis aimed at re-boosting its logistics sector.

This asymmetrical market recovery may mean that automobile manufacturers that are more engaged in the Chinese market will show more encouraging performances in 2020 than those which depend heavily on the European and US markets.

In the meantime, disruption in logistics poses another obstacle to the recovery of the industry-wide supply chain, particularly for sectors with deeply globalized integration, such as the automotive sector.

On the one hand, a split market also means an unequal reduction in freight. According to a report by Mckinsey, despite a 13% decline on both the Europe to China and Europe to US trade lanes, the absolute drop will be higher on the latter due to its bigger trading volume. From January to May, maritime shipping of vehicles and automotive parts from the EU to the US and China has plummeted by 39% and 26% respectively compared to the same period in 2019[3].

On the other hand, blank sailings on the Asia-European route has resulted in shippers turning to other transport modes, particularly by rail. For the automotive sector, in the first five months, the market share for rail has increased from 3% to 6% Westbound and from 7% to 8% Eastbound. This was particularly noticeable in May, where the sector’s shipping volume by rail from the EU to China increased by 42% in comparison to the same month last year, while that for ocean freight dropped by 38%. If Chinese demand continues to recover at the same pace, growth in the demand for Eastbound block trains for vehicles could also be expected. This mode has also been used during lockdown to deliver automotive parts.

It is easy to imagine that the crisis will also have a long-term impact on the automotive supply chain, with redesigned logistical flows and new solutions.

Focus on Textile and Apparel sectors

The garment industry is also a case in point showing an uneven recovery between supply and demand. In the first half of 2020, apparel manufacturing has consecutively gone through a supply shock followed by a demand shock, as the epicenter of the pandemic shifted from Asia to Europe.

While Asian textile suppliers were quite quick to resume their manufacturing capability, Europe's demand did not recover at the same pace. In May, textile and footwear retail rebounded by 130% compared to the previous month, but remained far below pre-pandemic levels. Increased unemployment rates due to economic recession mean that consumers will tend to spend less on non-essential goods. In June, the European consumer confidence survey showed very modest forecasts for next quarter's market (figure 3), despite some stimulation policies implemented in certain countries: for example, Germany’s six-month reduction in VAT.

Asymmetrical recovery between supply and demand has also hit European T&A manufacturing hard. According to the European Apparel and Textile Confederation, EU production in the sector plummeted 16.8% and 28.1% respectively in the first four months of 2020.

Furthermore, for central and eastern European countries, the uneven recovery can be both a challenge and an opportunity. As emerging T&A suppliers, these countries rely largely on the European market, particularly to the west. On one hand, they are vulnerable to a European market demand shock, but on the other, eastern European countries along with Turkey are regarded as good nearshoring options for the textile and apparel manufacturing leaving Asia.

The lag in market demand recovery, as illustrated above in the textile sector, contributed to the reduced demand for outbound shipping from Asia to other regions. A forecast from Mckinsey suggests that routes from Asia to Europe and North America will both suffer a decline of 20% in 2020, hardest hit will be ocean container-shipping, under an anticipated scenario of an effective health response but partially effective economy policies.

Overall, asymmetrical recovery on both intra-Europe and global levels is an inevitable scenario. It will have a long-lasting impact on strategies for the global supply chain. The pandemic has brought to the forefront the options of reshoring and nearshoring. What are the solutions available, and what makes a country attractive as a nearshoring option? These are the questions that we will be addressing in our next market insight piece.

[1] This is calculated based on 2019 annual trade data provided by Eurostat.
[2] China Association of Automobiles Manufactuers published its forecast in July suggesting 10%~20% recession this year.
[3] Caculation based on data from Eurostat.