The US has a stated ambition to build less vulnerable supply chains, with a focus on 'friendly' countries. Will this bring any new dynamics to transatlantic trade in 2023?

In 2022, the US Secretary of the Treasury, Yellen, introduced the concept of "friend-shoring". Unlike nearshoring, offshoring and reshoring, friend-shoring places political reliability of partners as the critical criterion in designing global supply chains. While there is no official definition of “friends,” they often include America’s allies, such as the EU, the UK, Japan and South Korea, etc. The US also seeks to expand the list of “friends” via new regional initiatives, such as the Indo-Pacific Economic Framework and the very recent US-Africa Summit. Did the shared interest of friend-shoring manifest itself by growing transatlantic trade in 2022, and what can we anticipate in 2023, especially in light of continued political and economic upheavals? This are the questions we shall be looking at here.

Overview of the Transatlantic Relations in 2022 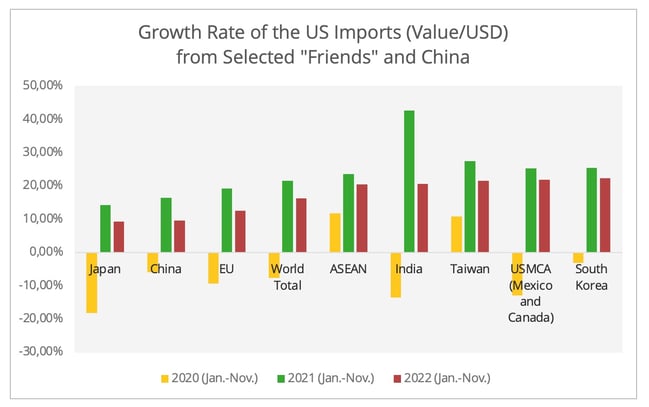 In contrast, the US exports to the EU increased by 29% in value, the highest among the "friends" we observed (Figure 2). This can be primarily attributed to the soaring EU demand for US LNG, due to the Russia-Ukraine war. Excluding the energy sector[1], the EU imports from the US rose 12%, in line with the US total export growth rate (excluding the energy sector). 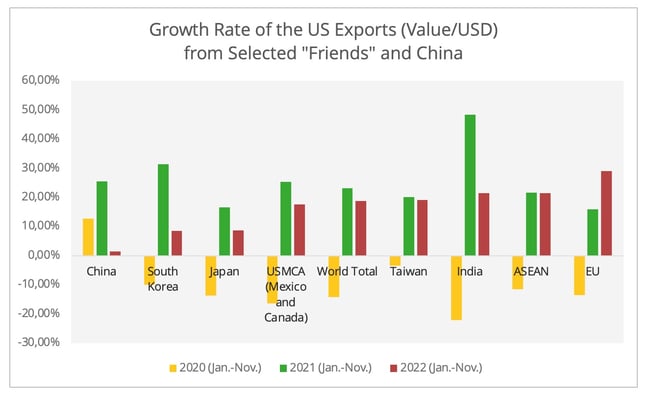 However, one sector stands out for its strong dynamism in transatlantic trade: that of semi-conductors, an industry clearly identified as a priority alongside some others in terms of friend-shoring[2], due to its strategic nature. The EU imports of chip-making machines from the US spiked 79% during this period[3], 1.5 times that of 2019 levels (Figure 3). 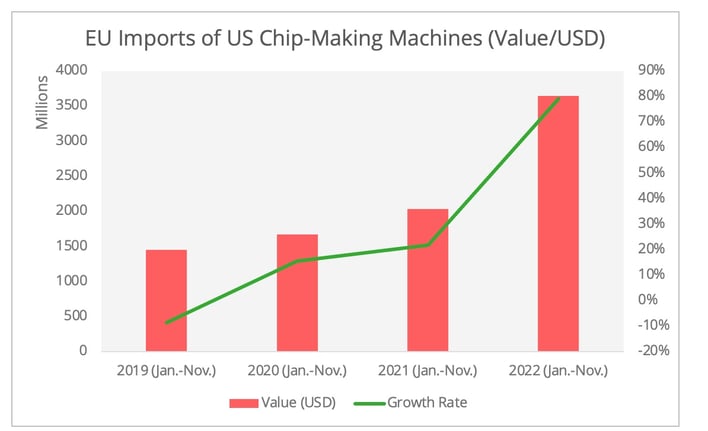 Likewise, the US demand for EU chips[4] also surged 37%, higher than the 13% growth of the US global imports of this commodity (Figure 4). 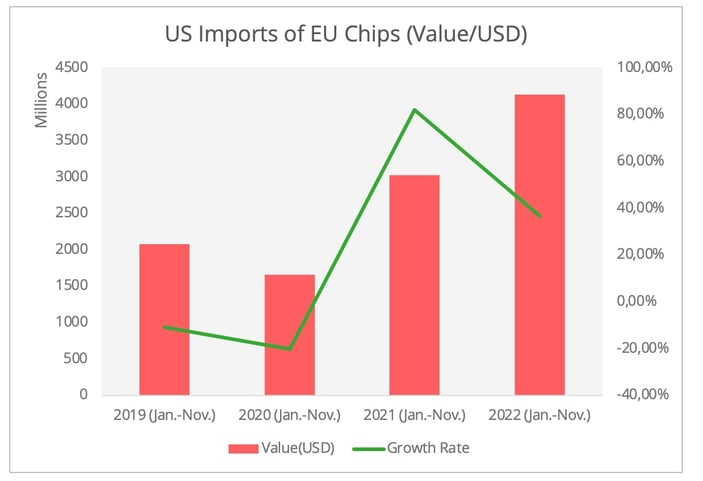 For a more accurate assessment, we have included volume data in our analysis, as inflation has also contributed to the burgeoning trade value. They also suggest a stronger transatlantic trade connection in the semiconductor sector. According to Eurostat, EU exports of chip-making machines to the US in terms of volume increased by 97% in 2022 (Jan.-Oct.), up 170% from 2019’s levels[5]. The EU export volume of semiconductors in the first ten months of 2022 to the US also rose by 64% (+9% in comparison to 2019’s pre-pandemic levels).

2023 has already started with mounting warnings of economic downturn, with the WTO projecting the growth of global trade volumes at a mere 1.1% this year. Will friend-shoring prove to be an effective policy support to the transatlantic economic connections in countervailing the bleak global economy, especially in strategic sectors?

The Inflation Reduction Act (IRA) adopted in the United States in August 2022 and the ongoing energy crisis could put European manufacturers’ competitiveness in the US market at risk. This is the case, for example, in the electric vehicle sector, a strategic industry targeted by friend-shoring and highlighted in the IRA.

The IRA has raised wide concerns in the EU and among other US allies such as South Korea and Japan. On the one hand, the EU welcomes US efforts towards the clean energy transition via the IRA. On the other hand, with massive tax incentives being introduced exclusively for North-American-assembled cars, these countries’ automotive exports to the US are now exposed to increased market-access barriers. Indeed, the EU and the US agreed upon a possible tweak of the IRA, but there is yet to be a clear agenda for modifications or exemptions, at least to public knowledge. In a scenario of exemptions being granted to the EU, it is likely that these will also be extended to Japan and South Korea, the latter having obtained a swelling share of EVs in the overseas market.

It is true that petrol prices in Europe returned to pre-Ukraine war levels by the end of 2022, but the EU is far from exiting the energy crisis. The price level in the EU is still much higher than in early 2021 and also the current price in the US. In the meantime, China's radical end of the Zero-Covid policy may tighten up the global LNG market in 2023, driving up prices yet again.

This situation could amplify the supply chain strategy readjustment adopted by some European manufacturers in 2022, consisting in the sourcing of intermediate goods from third countries, especially the energy-intensive products. This is particularly discernible in the chemical industry, which has suffered most from the energy crisis. Similar patterns can be observed in the automotive sector. Between 2021 and 2022, European imports of automotive intermediate goods saw a rapid increase, especially in the second and third quarters of 2022, while exports remain below 2019’s levels (Figure 5). European manufacturers must therefore rely more on external supply and, as a result, build extended supply chains, unlike other sectors which seek to shorten flows. Both could choices could hamper European manufacturers' global competitiveness, not just in the US market. 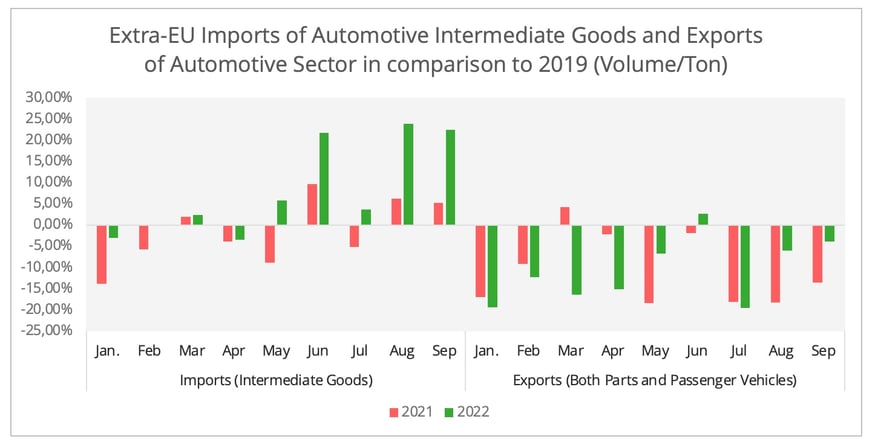 Furthermore, it should be noted that the EU's share of the US market for imported electric vehicles has already slid from 64% in 2019 to 44% in 2022 (Figure 6). The IRA and the energy crisis will certainly exacerbate the situation. 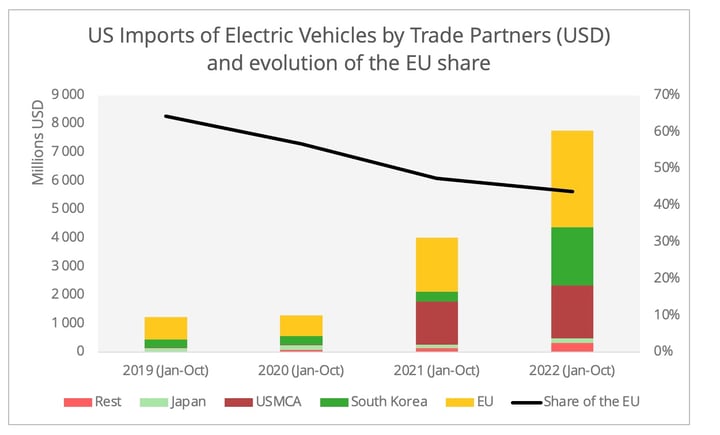 Under these conditions, one may wonder whether European investors will adopt a strategy of setting up operations "in the United States, for the United States". This is a phenomenon that has already been seen in China, where European companies have set up domestic supply chains dedicated to the Chinese market, in response to two risk factors in particular: the tension between the United States and China, but also China's strategic desire to be more self-reliant. The players adopting this strategy are mainly large companies, for whom China is an essential market in terms of revenue, particularly in the automotive sector.

Therefore, the proactive re-industrialisation policy of the United States and more affordable energy both offer the rationale for localizing their supply chains in the US or North America to improve the competitiveness in the US market. For example, Northvolt, the Swedish EV battery manufacturer, is reportedly considering postponing opening its German plant to expand its US plant. The 2022 FDI statistics also support this speculation. The announced green field projects in the US in the first three quarters of 2022 increased by 8%, in contrast to a 27% plunge in the EU (Figure 7). 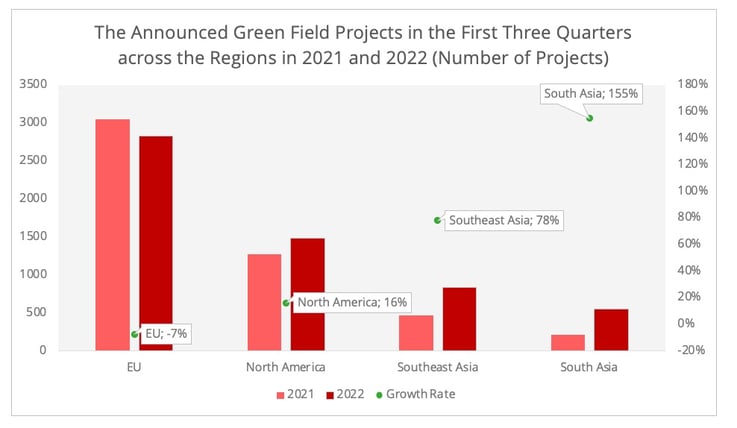 Furthermore, the potential divergent outlook for the US and EU consumer markets may add another incentive to localise businesses in the US. The differing US and EU core inflation rates in 2022, which exclude sectors of high short-term price volatility (food and energy) could suggest a more sluggish recovery in the European consumer market in 2023[8] (Figure 8). 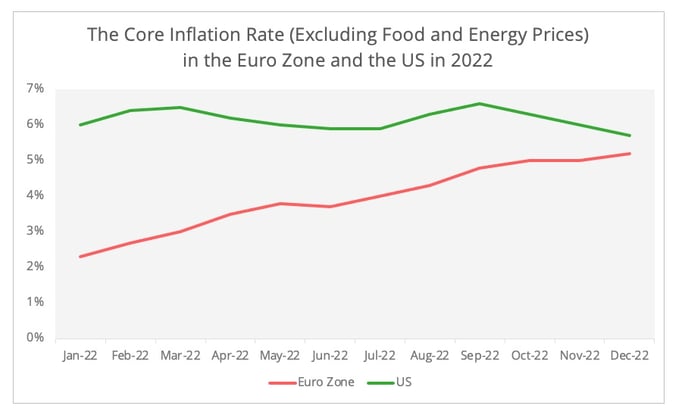 Figure 8 - Data Source: Eurostat and US Bureau of Labor Statistics

The projected lower unemployment rate in the US, according to the OECD, may also suggest a more promising consumer market in the upcoming years (Figure 9). 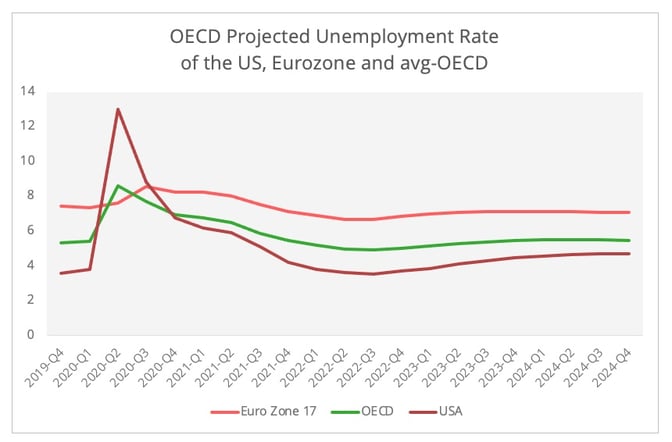 Eventually, beyond 2023, there is the crucial 2024 US presidential election, which could produce collateral effects as early as this year. The situation is not without its paradoxes. On the one hand, transatlantic relations could be more relaxed with a Democrat administration. On the other hand, a Republican president coupled with the Republican-controlled congress might be ideologically more inclined to repeal the IRA. However, regardless of the election result, we do notice a bi-partisan consensus in the US of being more inward focusing. Even if the tax incentive for EVs under the IRA were to be scrapped in 2024, other trade and market access barriers may be considered.

[1] Here we have excluded the trade value of HS code 27, which includes the LNG and oil.

[5] The volume data is not available from the US Census Bureau.

[6] The data refer to the general automotive industry. Based on the Eurostat BEC data (code 51). The growth rate here is not YoY growth rate, both the growth rate of 2021 and 2022 in comparison to 2019.

[8] Core inflation does not include those from the food and energy sectors, which offer a more accurate picture of the inflation level. For the Eurozone data, we used the data “Overall Index Excluding Energy, Food, Alcohol and Tobacco” to represent the core inflation 337