Throughput of Chinese Ports: the first impacts of the pandemic

According to data published by the Chinese Ministry of Transport, the total throughput of Chinese ports has decreased by 8%, and by 11% for container shipping volume during the first two months of 2020, partly due to the Coronavirus outbreak. Moreover, China will be facing a declining demand from the global market for the next few months. 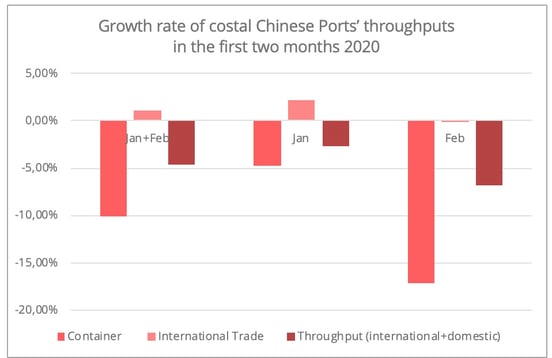 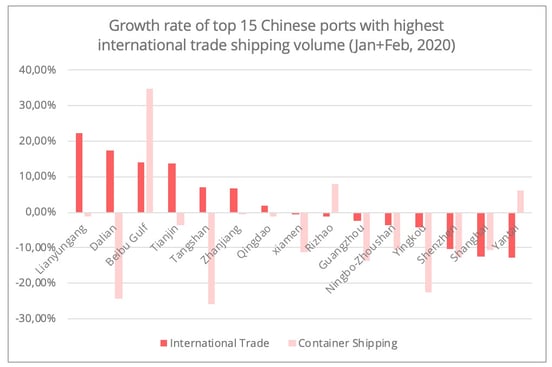 In contrast to the two-digit decreases of overall shipping volume, the throughput of international trade shipments may show a glimmer of hope, with a 1.15% increase in the first two months (Figure 2). This increase was more related to the domestic shipping of dry bulk commodities, such as ore, coal, soybean etc, rather than container shipping of manufactured goods. This conclusion was drawn from the following observations:

Located in Guangxi province, in the Southwest of China, Beibu Gulf Port is identified as being one of the strategic logistics hubs for one of China’s ambitious connection projects under the Belt and Road initiative: the New Land-Sea International Trade Corridor. This project aims to develop intermodal shipping connections between western China and Southeast Asia in order to support a future supply chain cluster in the area. As such, the throughput of the port of Beibu Gulf is tightly linked to China’s trade with Southeast Asia.

In the first two months of 2020, for the first time in its history, the Association of Southeast Asian Nations[1] (ASEAN), considered as a single entity, surpassed the EU as China’s largest trading partner, accounting for 14.4% of all Chinese international trade. The increase in China-ASEAN trade was mainly driven by Chinese imports from Southeast Asian countries rather than exports, since Chinese imports from ASEAN increased by 9%, whilst exports fell by 3.6%. 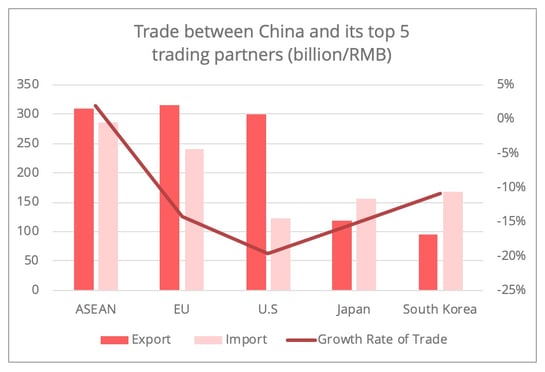 The overall growth of Chinese imports from ASEAN can be largely attributed to the growth of Chinese imports from Vietnam (+26%). Specifically, for Vietnam, the increase was driven by the significant growth (+68%) of Chinese imports of electronic machinery products, such as computers, cellphones and intermediate parts, including semi-conductors. This may be related to Chinese companies moving their labor-intensive manufacturing sectors to Vietnam in recent years. According to Vietnamese local reports, by February 15th, around two thirds of total Vietnamese exports came from the foreign direct investment enterprises in Vietnam. 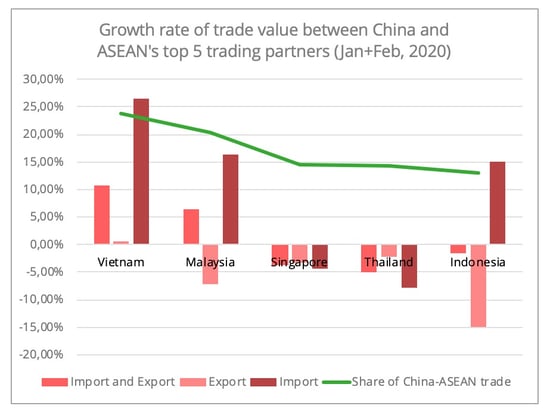 The increase in Vietnamese exports of electronic machinery products in February, after a decrease in January, may also reflect the resumption of production in the Chinese tech manufacturing sector in February. However, with Southeast Asian governments’ moves to implement stricter measures to contain the spread of the pandemic, there will be additional challenges facing the China-ASEAN trade in the upcoming months.

Along with the gradual easing of the situation concerning the Covid-19 outbreak in China, Chinese supply and demand is also recovering. One of the emerging problems, however, will be the decline in demand from the global market over the next few months.

On one hand, an increased demand for shipments may come from the medical equipment sector. For instance, recently, the US has excluded multiple medical protection products from the tariff list of Chinese products, as they are in high demand to contain the Covid-19 outbreak.

On the other hand, China is facing a declining demand from the global market, due to the shutting down of retail and manufacturing sites to contain the pandemic. This will be particularly the case for Chinese exports to the US and the EU. For instance, it is reported that the Chinese export-oriented textile manufacturing sector is now facing cancellations of orders from Europe and the US. A similar situation can be anticipated for other manufacturing sectors in China which could further add to the declining demand of container shipping between China and Europe during the Covid-19 outbreak.