[INFOGRAPHICS] The lull in the growth of world trade, after it overheated in 2021, is starting to have an impact on traffic through the world's leading ports. The slowdown is particularly marked in European ports.

Traffic trends at the world's leading ports are evidence of the progressive slowdown in trade following the strong recovery seen in 2021, against a background of rising inflation and disruption of production plants and logistics chains. The combined traffic of the top 10 ports nevertheless rose 1.5% year on year, compared to the first half of 2022, to reach a total of 134.4 million TEU. 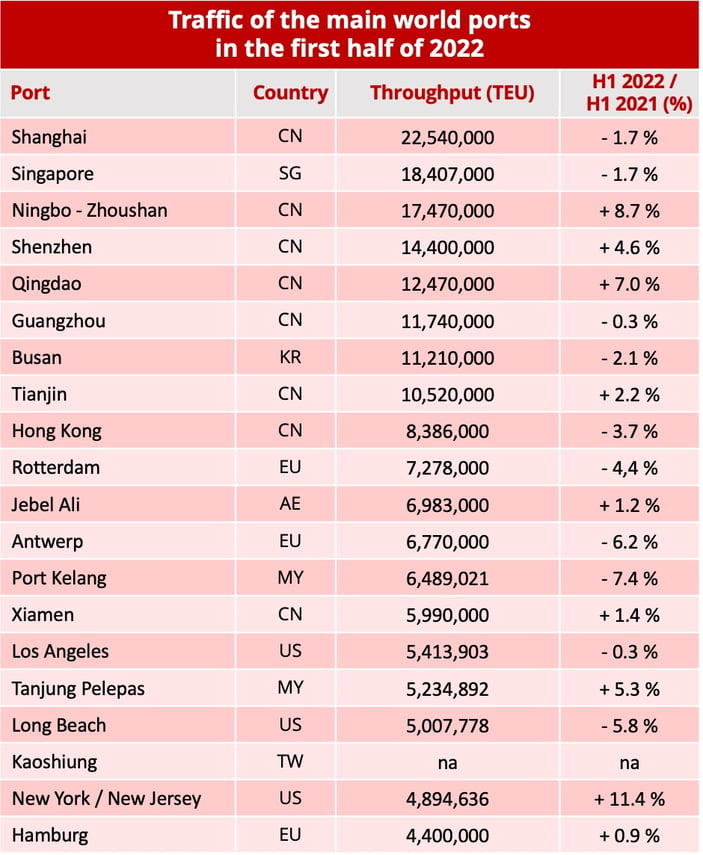 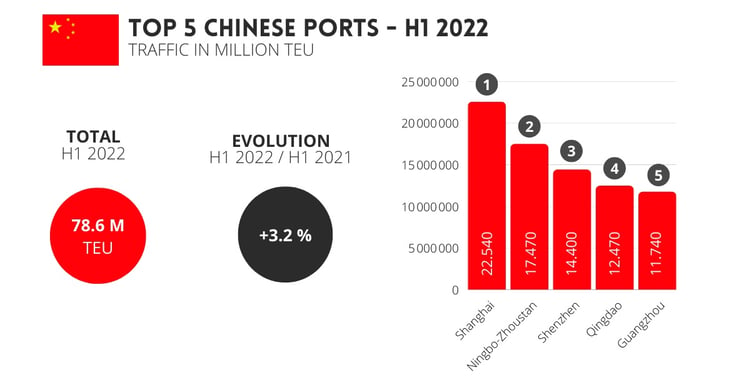 China, which has seven ports in the world top 10, has published remarkable satisfactory results, taking account of the drastic lockdowns which disrupted the workings of its economy in the spring. Only Shanghai, Guangzhou and Hong Kong saw their throughput fall and, in general, these falls were relatively modest. Overall, the 10 leading Chinese ports handled a combined traffic total of 103.5 million TEU in the first half of 2022, 3.6% more than in the first half of 2021.

The ports of Beibu Gulf and Rhizao registered two-figure growth. The rise was particularly marked at Beibu Gulf, where container traffic rose 21.4% over the first half of 2021 to 3.2 million TEU. According to the port authority, the increase in activity was driven by the opening of new lines to South East Asian countries like Thailand, Cambodia and Vietnam, thanks to the inauguration of the new Asia-Pacific Regional Comprehensive Economic Partnership. Beibu Gulf has experienced double-digit growth throughout the pandemic period over the past two years. Compared to 2019, the volume of containers handled has almost doubled from 1,590,000 TEU in the first half of 2019 to 3,170,000 TEU in 2022. 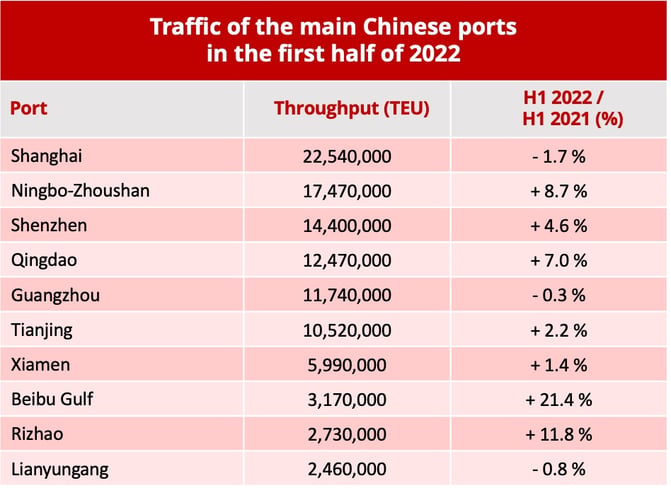 3/ Ports in the United States 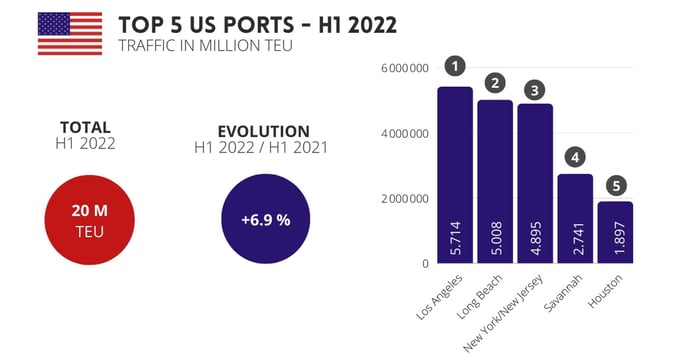 Faced with congestion in west coast ports, shippers looked for alternative solutions on the east coast, where all ports did well. This was also the case for Houston in the Gulf of Mexico. New York, the leading east coast port, saw its traffic rise 11.4%. Full container traffic increased 7.9% to 3.2 million TEU. Imports increased 12% to 2.5 million TEU, while export dipped 5% to 664,323 TEU. Empty container traffic rose 18.3%, with exports up 18.7% and imports down 29.6%. 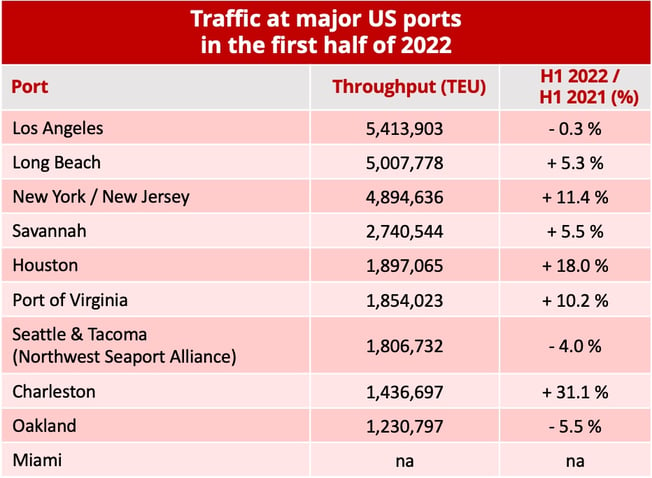 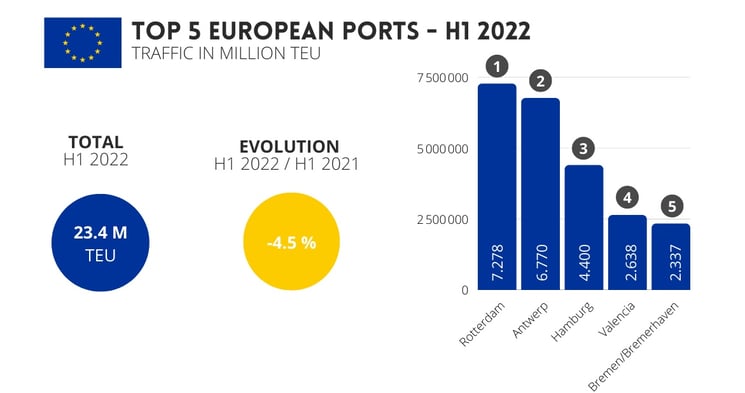 The mood at European ports was morose. Almost all saw their container traffic fall in the first half of 2022, with Hamburg and Barcelona the only exceptions. Gioia Tauro also looks to have registered positive results. The port has not published its monthly figures but the chairman of the port authority indicated in early August that traffic had risen 15.3% during the first seven months to 2,003,388 TEU.

European leader Rotterdam experienced a 4.4% fall in throughput, for which the port authority gave two main reasons. The first was the fall in container traffic in and out of Russia because of the sanctions imposed on it following its invasion of Ukraine. The second was the current disorganised state of shipping services. "To make up time, large vessels are now often cancelling calls to ports in their itineraries (-5.5% calls in Rotterdam by comparison with last year)," the port said, "and loading and unloading more containers per call (+6.1%). This results in peaks in activity at the terminals… As a result of these developments, shipping companies are currently using smaller ports of call for transhipment relatively more often than large ports such as Rotterdam." Antwerp put forward the same arguments to justify the fall in its traffic in the first half, when traffic involving Russia dropped 39%.

Hambourg also suffered the impact of the sanctions against Russia. Its container traffic in and out of Russian ports fell 50.9%. On the other hand, traffic with its main trading partners, including China, continued to show growth. Hamburg was also successful in its role as a transhipment hub for the Baltic region. Altogether, in the first half, the port's container transhipment traffic increased 2.7% to 1.6 million TEU. The heaviest fall in traffic was experienced by the German port of Bremerhaven, followed closely by Piraeus. 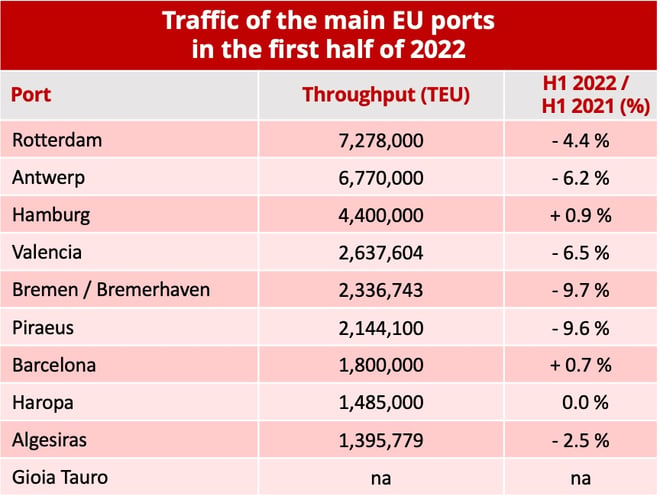 Among the French ports, Le Havre recorded a stable level of activity. This result was fairly satisfactory, taking account of the general situation. "Market share rose slightly against the background of a general fall in container traffic in the northern range," the port authority said.

Marseille produced a good performance, as it set a new container traffic record of 800,000 TEU, up 5% on 2021 and 7% on 2019. "The Port of Marseille Fos is benefiting from the congestion in neighbouring Mediterranean ports, thanks to greater handling fluidity in its terminals," the port authority said.