On November 9th, the EU commission decided to impose tariffs of 15% and 25% on goods valued at 4 billion USD after the WTO granted the EU the green light in their 16-year-long civil aircraft dispute with the US. The tariffs entered into force on November 10th, one day after the list was published. This article takes a comparative look between the EU’s list and the US’s 2019 list on EU goods following its win in the Airbus case and also the impact on transatlantic trade of the future Biden administration.

In terms of value, apart from aircraft which account for 44% of the total $4 billion, food and agricultural products is the sector with the second-highest value, 27% of the total amount, based on 2019 EU-US trade data. They are followed by machinery, games manufacturing, automotive and chemical industry (figure 1). 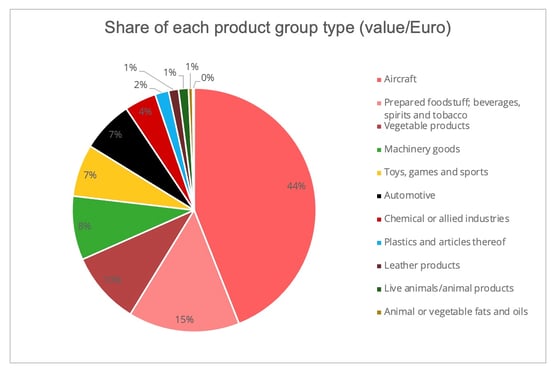 In terms of volume, four out of the top five goods with the highest volumes are agricultural products including wheat, sweet potatoes, and groundnuts. In total, goods from the agricultural and food industry account for around 2/3 of the total shipping volumes of the listed goods. 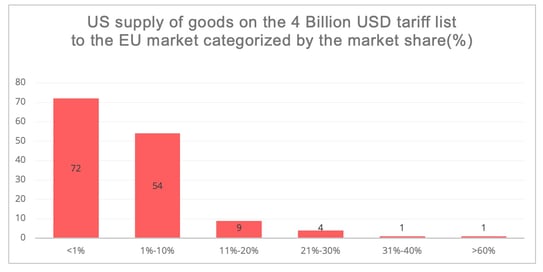 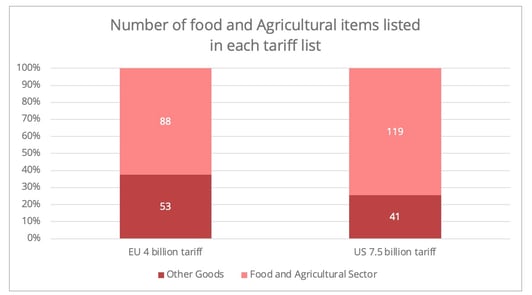 Strong impact on the food and agricultural industry

With tariffs heavily targeting each other's food and agricultural industry, transatlantic trade in this sector has gone through turbulent times (figure 4) [3]. 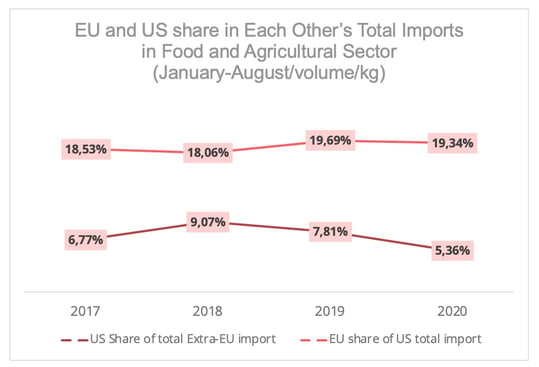 Let us take the alcohol industry as an example, as it is among those being hit the hardest. According to the distilled spirits council of the United States, the 25% additional tariff on American Whisky and Bourbon imposed by the EU in 2018 in retaliation to the US tariffs on European steel and iron goods, resulted in a 41% shrinkage of US exports in this sector to the EU in the past three years. Similarly, from Oct. 2019 to Aug. 2020, the US imposition of a 25% additional tariff has led to a 34% drop in US imports of Scotch Whisky and a 28% fall in German, Italian, Irish, and British liqueurs and cordials compared to the same period from previous years.

Obviously, the drop in the US imports may also be associated with the wide range of lockdown measures concerning bars and restaurants across the country, which dwindled the US domestic demand for alcohol in 2020, despite a reported 14% increase in adult consumption of alcohol in the US during the pandemic.

It is worth noting that there was an increased demand for other types of alcoholic drinks from the EU and other countries on the US market. For instance, despite the overall fall in EU wine and spirit exports to the US, European cider exports to US market showed an increase of 30% in volume and 19% in value. In the meantime, the US tariff on French, Spanish, and German wines and British whisky generated trade diversion benefiting New Zealand, Argentina, and those EU countries who have dodged the tariffs, growing the exports of Italian and Portuguese wine and Irish whiskey.

What will be the extent of the effects of the new tariffs on transatlantic trade in these goods? Can the EU secure alternative suppliers, either through intra-EU trade or from third parties, for those goods with additional tariffs imposed on them?

For the alcohol sector, with an additional tariff on US rum and vodka, it is possible we will see a trade diversion to either intra-EU trade or Latin American countries, which are also leading spirits suppliers to the EU. For other goods, where the US is the major supplier, the EU importers may either source through intra-EU supply or to other major external suppliers such as Egypt for sweet potatoes and groundnuts or China for the machinery equipment.

At the same time, a related question is: how should we interpret the imposition of tariffs? Is the mutual imposition of additional tariffs to be the new normal in transatlantic trade or does this act more as leverage for future EU-US trade agreement negotiations? Despite the November 9th imposition of tariffs, the EU commission also stated that they could be withdrawn if the US decided to remove its additional tariffs on EU goods. The focal question here is what will the transatlantic trade relation look like under the President-elect Biden’s government?

Transatlantic Relations under the Biden Administration

Repairing transatlantic relations is generally believed to be one of the elements in Biden’s approach to his presidential term. According to his supply chain strategy published this July, the Biden administration will aim to form a supply chain based around all US allies, reduce the US reliance on Chinese supply in critical sectors, and lower the US dependency on the Chinese market. However, some uncertainties are embedded in the transatlantic trade relation.

To start with, how will the Biden administration seek a balance between the restoration of the domestic manufacturing industry and a possible supply chain covering all America’s allies? Repairing American manufacturing capability will be a priority during Biden's term, especially with the proposed “Made in all of America” and the $700 million “Buy American” strategy. In terms of the external market, the Biden administration aims to boost US exports by expanding the US allies’ market.

Then the question here is, how would the EU respond to this strategy in the light of it seeking “strategic autonomy”. In March, the EU published its new industrial strategy to build a pan-EU supply chain to enhance resilience, especially in sectors such as electric vehicles and notably their batteries, and the pharmaceutical industry. These two sectors are also areas in the US manufacturing industry that the Biden administration would like to see restored. As such, the EU and the US may be competing in these sectors and potentially posing uncertainties for future transatlantic trade.

Indeed, an ameliorated EU-US relationship can be envisaged under the future Biden administration. Nonetheless, one should not be overly optimistic by hoping that the US will rush into striking a major transatlantic trade agreement with the EU, or at least not in the early stages of Biden's presidency.

[1] In 2020, the US trade representative adjusted the tariff list, notably by removing the tariff on British shortbread and putting a heavier focus on French and German products. Here, we look at the original 7.5 billion tariff list.
[2] This includes both intra-EU supply and extra-EU supply.
[3] These are the trade values from HS code 1 to HS code 24.