2021 review of road transport in Europe

In 2021 European road freight transport continued the recovery that had begun in the second half of 2020 but has failed to return to pre-pandemic levels.

The coronavirus pandemic has wreaked havoc on the global economy. In Europe, with 2020’s lot of paralyzed factories and a collapsed market, 2021 was to be the year of recovery. This was the case, but only partially. However, the massive support plans for the economy and businesses decided by the governments made it possible to avoid the wave of bankruptcies that the professionals and observers of road freight transport had feared.

The market had to deal with a demand that exceeded the supply. This has had repercussions on the entire Supply Chain, and in particular on transport. Our Anglo-Saxon friends have used the expression “Perfect Storm” to describe the combination of phenomena which has driven up the prices of European road freight transport. These include the scarcity of semiconductors, the sharp rise in fuel prices and the shortage of truck drivers, especially in the UK where Brexit has worsened the situation.

These factors have had an inflationary influence on the prices of road freight transport in Europe, but with disparities between markets. Certain difficulties have become structural, such as the shortage of drivers. We can therefore expect a period of sustained inflation of freight rates over the medium term.

According to the IMF, the growth of the world economy should reach 5.9% in 2021. In Europe, the most recent forecasts from the European Commission, released on November 11, anticipate a growth of the GDP of 5% for the same period. France shows a certain dynamism, with an increase expected to reach 6.5%. With the reduction in health restrictions, the economic recovery is therefore strong and general, and this sustained growth should be maintained until the end of the year. However, the prospects for a simple 'return to normality' are dwindling.

First of all, at the end of this year, the surge of a fifth wave and the emergence of the Omicron variant serve as a reminder that the Covid-19 epidemic remains very present. It is obviously impossible at this stage to measure the economic consequences of this fifth wave, but world trade has already been affected by the border closures decided by some countries due to the Omicron variant.

On top of this, despite a strong recovery, the year 2021 was marked by an accentuation of shortages of raw materials and sometimes of labour. By sustaining high inflation, this phenomenon has partially eroded the benefits of the restart.

Inflation is currently accelerating. According to the IMF, at the end of 2021, consumer prices should show a rise of 2.9% in the euro zone, 4% in Germany and 2.9% in France. On an annual average, the latest forecasts from the European Commission predict inflation of 2.6% for the European Union in 2021, against 0.7% in 2020. According to the INSEE, in France, there has been an acceleration in the rise in prices and in October it reached 2.6% over 12 months.

A road transport market still lower than in 2019

Market projections established by Transport Intelligence (Ti) show that the European road freight market grew by 8.6% year-on-year at the end of October 2021, with stronger growth internationally (+11.8%) than on domestic markets (+7.2%). Retail and e-commerce have boosted cross-border flows of consumer goods. In contrast, many industrial sectors such as construction felt the effects of the downturn and supply shortages. As these flows tend to be more national in nature, this has in comparison hampered the growth of the domestic transport market. The recovery of European internal trade is slightly outpacing that of the rest of the world. At the same time, the growth of Full Truck Load (FTL) movements has overtaken that of Less than Truck Load (LTL) movements as customers seek to ensure access to capacity. However, the LTL is expected to represent 70.8% of the total market in 2021. 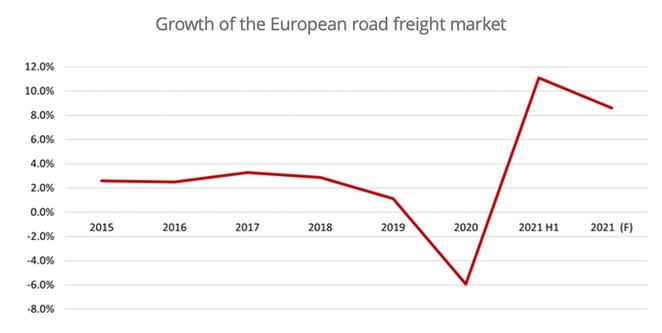 Three of Europe's five largest economies, however, are slowly recovering from the consequences of the crisis: the UK, Italy, and Spain. The latter two countries are making significant progress, but not yet enough to recover from 2020's collapse. On the other hand, with a growth of 4.2% expected in 2021, Germany is almost back to its pre-crisis level (- 0.3%). It is true that it had also experienced a smaller decline during the pandemic.

An increase in costs which should continue

Inflationary pressures have obviously not spared the road freight transport sector. In France, the increase in the full cost price measured by the National Road Committee (CNR) reached on average 4.8% in 2021 (5.2% for long distance). This sharp increase was mainly driven by the explosion in diesel prices.

Excluding diesel, road transport costs have only increased very slightly, at least in France: + 1.5% on average for the year, estimates the CNR. The components of this index (wages, structural costs, travel allowances, etc.) do not reflect any major change in 2021, but we nevertheless note that maintenance costs have risen significantly (+ 2.7% on annual average). Under the effects of the inflation of maintenance-repair costs (parts, purchases of external services, lubricants and other workshop costs) and of AdBlue costs (average annual inflation of 24% ), repair costs increased by 3.6%.

The shortage of drivers, on the other hand, has not yet produced heavily inflationary effects on wages in France, contrary to what has been observed in other European countries. But for 2022 the CNR forecasts an increase in personnel costs between 4.5% and 7.2% in the second (Long Haul). The increase in the other components of road transport costs is expected to be between 3.5% and 4%.

Transport prices up across Europe

In this context of driver shortages on a pan-European scale and rising fuel prices, road freight rates reached a record level. The European Road Freight Rate Index benchmark – calculated by Transport Intelligence (Ti), Upply and the IRU – reached 107.6 for the third quarter of 2021. This is the fifth consecutive quarter of growth and the highest level reached by this index since its inception in 2017.

The economic recovery only accentuates a shortage that is nothing new! Lack of attractiveness of the profession, an ageing driver population (with an average age of 44), and a high level of qualification required to exercise the profession are all reasons that explain the shortage.

In 2021 another factor that led to the procession of disruptions that have hit the road transport of goods: delays in the delivery of new trucks. There are several reasons why carriers need to be patient.

In the spring of 2020, the pandemic halted investment in rolling stock for most transport companies. Then, as demand continued to remain at a quite high level, orders picked up again at the end of 2020 and early 2021. This delayed impact was combined with another factor, the 3-yearly fleet replacement cycle. However, truck sales were already very high in 2018. This sharp increase in demand has therefore saturated the production capacity of manufacturers.

This has been observed across Europe but especially in Poland, according to Trans.info. In the EU as a whole in March 2021, truck registrations increased by 56.8% but this is nothing compared to the 127.3% rise recorded in Poland!

Then manufacturers encountered production difficulties that also contributed to the extension of delivery times for the vehicles already ordered. Not only have manufacturers not been able to increase throughput, but they have sometimes even been forced to suspend production due to a lack of supply of integrated circuits and chips for the automotive sector. All brands were affected.

Finally, we cannot close this 2021 review of European road freight transport without mentioning the "Fit for 55" Green Deal presented this year by the European Commission.   The aim is to reduce greenhouse gas emissions by 55% by 2030 and to achieve carbon neutrality by 2050.

The consequences for road freight transport are manifold. Several European professional federations, including the FNTR in France, are warning of the risk of weakening a sector that has demonstrated its strategic character during the pandemic. "It is clear that double and triple taxation of the same CO2 emissions via different tools such as the Emissions Trading System (EU ETS), the "Eurovignette" Directive and the Energy Tax Directive must be avoided. Road transport companies are more than willing to turn to climate-neutral technologies as soon as they are available at competitive prices and accompanied by the corresponding green infrastructure," said a joint statement from the FNTR and its counterparts in Germany and the Nordic countries.

The sector is teaming with initiatives in this area. TotalEnergies and Daimler Truck AG signed an agreement in November for the decarbonisation of road freight in the European Union. The partners want to develop ecosystems dedicated to hydrogen-powered trucks. The aim is to demonstrate the attractiveness and efficiency of trucks powered by green hydrogen but also to play a leading role in the launch and deployment of hydrogen infrastructure for transport. The development of electric road transport was also in the spotlight at Solutrans, the main French trade fair for industrial and urban vehicles. All manufacturers presented electric models.

While no one disputes the need for this ecological transition, it is clear that it has a dizzying cost. Enough to fuel a little more the inflationary pressures observed in 2021.