Global air freight traffic is little by little continuing to catch up with its 2019 level, as is shown by IATA figures for the month of October. The end of the year promises to be lively nevertheless as the capacity shortage continues.

The economic situation in the air freight sector is continuing to improve. In October, worldwide traffic in tonne-kilometres was 6.2% down on the total for the same month in 2019, according to the International Air Transport Association (IATA), compared to a shortfall of 7.8% in September.

The gradual recovery is "aligned with improvements in key economic indicators", IATA said. The Purchasing Managers' Index shows that the manufacturing sector has been "largely unimpacted by the resurgence of COVID-19 in Europe and North America" and that worldwide production will continue to recover throughout the fourth quarter of 2020, it added.

Over the year up to the end of October, the reduction in air freight traffic stood at 12.4%. For the first time since the start of the year, African airlines even showed an increase in traffic, albeit a very small one. More significantly, taking account of the freight volume represented by their 24.3% market share, the North American companies came close to returning to positive territory, thanks to dynamic domestic traffic. Major regional disparities nevertheless remained. In the other two major air freight regions, Asia-Pacific and Europe, double-figure reductions were recorded both in October and over the first 10 months of the year.

A slight improvement in capacity

On the capacity front, there was no notable improvement. In October, available capacity was 22.6% less than in October 2019. It nevertheless improved a little over September, when the reduction was 25.5%, but the contraction in capacity, which was four times higher than the reduction in demand, ensured that the capacity shortage remained a preoccupation for shippers.

Load factors were at high levels, notably at Asia-Pacific and European companies.

A marked increase in freight rates

The mismatch between supply and demand has enabled the airlines to increase their prices. Our Upply data base shows strong tension over prices on Asia-Europe routes. First estimates for the month of November show a certain cooling and the start of a fall in rates on certain routes. The new lockdowns, notably in Europe, may have resulted in some holding off on the part of shippers. A lively peak season is nevertheless expected in December, as e-commerce drives the market forward in the run-up to Christmas. The first shipments of anti-Covid vaccines are also creating demand for capacity. 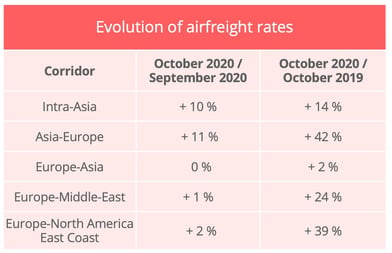 An increase which is likely to last

In its last report on the economic performance of the air transport industry, IATA forecast that the cargo business would generate a turnover of $117.7 billion in 2020, compared to $102.4 billion in 2019. Average unit revenues were expected to rise to 2.31$ per kg, compared to 1.82$ last year.

The upward trend should continue, moreover. IATA has forecast an average freight rate of $2.35 per kilo in 2021. Volumes, too, should return to growth, increasing from 54.3 Mt in 2020 to 61.2 Mt in 2021. Traffic will thus virtually return to its 2019 level of 61.3 Mt. Of course, the pandemic is continuing to create a lot of uncertainty about the economy generally and about the aviation industry in particular. But, if IATA's forecasts are confirmed, the cargo business could generate a record turnover of $138 billion in 2021.