Latest figures from the International Air Transport Association (IATA) for April 2021 confirm the air freight industry's recovery. For the third consecutive month, volumes in tonne-kilometres exceeded pre-crisis levels. They were up 12% on April 2019 and 48.3% on April 2020, when the pandemic was at its height.

The upward trend is also marked on a month-by-month basis. Freight volumes in April were up 7.8% on March and 4% after corrections for seasonal variations, which represents the biggest increase since September 2020. "Seasonally adjusted CTKs rose by 4.0% month-on-month and are now around 5% above the pre-crisis peak of August 2018," IATA said. 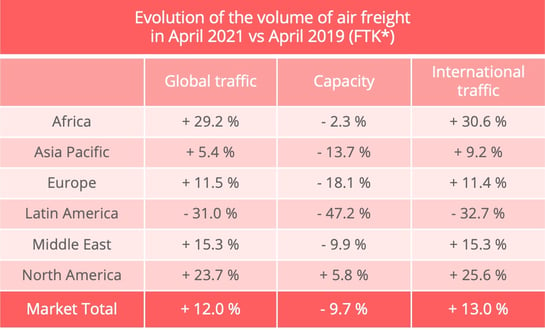 Several factors are contributing to air freight's performance. First, the V-shaped recovery in production and international trade since the low point reached in spring 2020 is holding its promise. It is generating a flow of cargo volume which is benefiting all transport modes.

In this situation of vigorous recovery, stock levels have diminished sharply, even dropping to exceptionally low levels in the United States. The need to quickly reconstitute these stocks is highly beneficial to air freight, which offers the fastest delivery times. Another phenomenon which could benefit air freight is the shortage of commodities and other materials, including semi-conductors. This can cause production and therefore marketing delays which air transport can make up or at least reduce.

Air transport is also benefiting from the blockages affecting the shipping sector. Operational difficulties in the form of congestion, cancellation of ship calls and difficult access to capacity are becoming increasingly frequent, creating major disarray in supply chains. Air transport can offer solutions to these problems. For shipments between China and Europe, many shippers have turned to rail transport. Of course, rail and air transport cannot match the giant container ships in capacity terms but, in the current situation, are attracting increased interest as a complementary solution.

IATA points out that air freight has become much more competitive in relation to shipping in price terms in recent months. Freight rates have increased sharply in both sectors since the start of the pandemic in spring 2020. Air freight rates are still at high levels at the moment but are tending to stabilise, as our Upply data base shows. Ocean freight rates are continuing to soar, however, and no reversal of the trend looks likely in the short term. 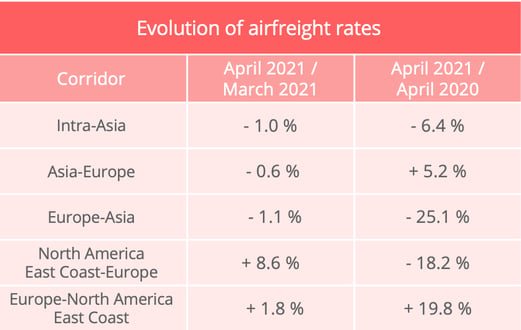 Source : Upply - NB : These estimates are based on real transactions. The Covid-19 pandemic and its impact on business activity levels make the collection of data more complex. Figures can be revised as new data is integrated into Upply's data base.

Certainly, the air freight industry is also facing persistent capacity problems. In April 2021, capacity was still 9.7% below its level in April 2019 as passenger capacity was only restored to a very limited extent. Hold capacity in April was still 38.5% down and a 26.2% increase in capacity on all-cargo aircraft was not enough to make up for this shortfall.

IATA was nevertheless optimistic about the sector's prospects, taking account of current favourable economic conditions. "We think air cargo will continue to perform well in the coming months," it said. Demand is keeping prices up at very satisfactory levels for carriers, particularly on Asia-Europe and Europe-America routes.

North America still in the lead

Economic growth in the United States is still a powerful driver of growth for the North American airlines. Thanks to economic support policies, the efficiency of the vaccination campaign and the gradual relaxation of distancing measures, business activity is recovering faster there than elsewhere. "In April, retail sales were 17% higher than at the start of 2020 and more than 80% of the fall in industrial production caused by the health crisis had been recovered," the French economy ministry's treasury department noted in a commentary on the US economy.