Aircraft grounded, cargo volumes in free fall, prices soaring on some routes and plunging on others. The Covid-19 epidemic is shaking up the air freight industry. The shock wave, which began to make itself felt in February, is continuing to spread at the same speed as the coronavirus itself.

In line with IATA's expectations, the impact of the coronavirus epidemic began to show itself in the statistics in the month of February. The traffic figures for this period show only a small 1.4% diminution compared to February 2019. After having been corrected for seasonal variations, however, the reduction was 9.1%. The difference was caused by the fact that the Chinese New Year, and the factory shutdowns which go with it, fell in February in 2019 whereas it fell in January this year.

The crisis is very much present at this point. The extension of Chinese factory shutdowns in February, an attempt to contain the Covid-19 epidemic, led to a fall in production on the Chinese market, one of air freight's biggest. Airlines in the Asia-Pacific region have been most affected, moreover, with corrected figures showing a 15.5% reduction in demand for air freight. Europe is being hard hit as well. 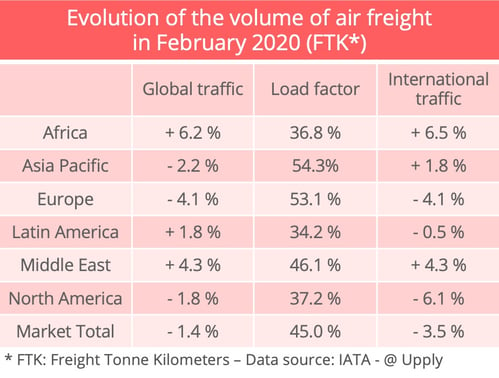 At the same time, capacity began to diminish as a result of the cancellation of numerous passenger flights. "In February 2019, roughly 65% of the total cargo capacity worldwide was put in the belly of passenger aircraft," IATA said. "This share fell to 62% in February 2020." Asian companies were in the front line, with a 17.7% capacity reduction, the biggest since 2013. European carriers followed the same trend, with a 3.8% reduction in capacity. The Italian market was heavily affected after the coronavirus epidemic hit the northern part of the country, which is particularly heavily industrialized. We will need to wait for the March results to measure the results in other countries.

Paradoxically, in the midst of this economic slump, supply contracted more quickly than demand for the first time for a long time. This led to a 1.5-point increase in the global load factor, which finished at 46.4%. This trend will be even more marked in March. Certainly, volumes are continuing to fall, according to Clive Data Services data reported by the Loadstar, but the increasing number of outbreaks of the epidemic worldwide has resulted in companies cancelling flights on a massive scale.

The situation is starting to have a significant impact on prices, at least on certain routes. In China, production is gradually resuming. At the same time, while demand has fallen in some areas of activity, it has exploded in other market segments, particularly for urgently needed goods like medical equipment. Overall, our Upply data base shows a strong increase in air freight rates since mid-March. In the Asia-Europe direction, as is shown by the two examples below (go to Upply's Benchmark to check out lines which interest you). 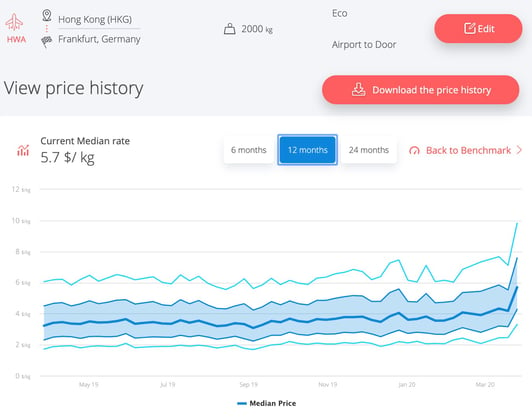 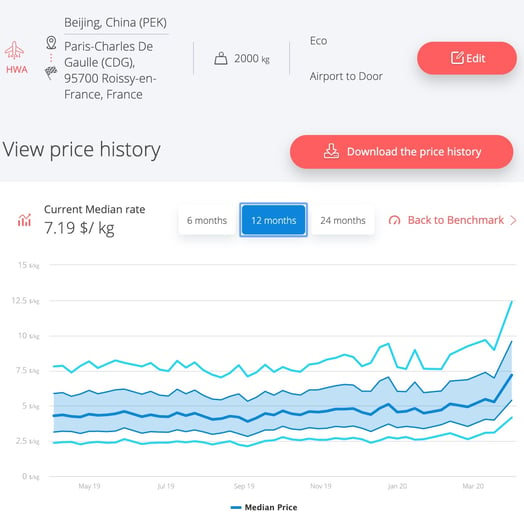 We can see the same trend on other routes like the Transatlantic, where prices between Europe and the United States, for example, increased strongly in March. In fact, this upward trend shows that the world supply chain is totally disorganized. The problem of access to capacity and the impossibility of predicting supply and demand movements justify the the market's readiness to accept higher prices.

"Among all the uncertainty in this crisis, one thing is clear—air cargo is vital," said Alexandre de Juniac, IATA’s Director General and CEO. "It is delivering lifesaving drugs and medical equipment. And it is supporting global supply chains. That’s why it is critical for governments to remove any blockers as the industry does all it can to keep the global air cargo network functioning in the crisis and ready for the recovery."

On March 26, the European Commission published guidelines for the air freight sector which aim to facilitate its activities.