Container shipping market: figures for the first half of the year

INFOGRAPHICS. The financial results of the major maritime transport operators in the first half of 2022 show record profitability, despite the beginning of an erosion of volumes.

While a reversal of the trend is emerging, with a sharp decline in freight rates, particularly on the Asia-Europe axis), we wanted to turn the spotlight on the results recorded in the first half of 2022 by the main European shipping companies (excluding MSC which does not publish its financial results) and by the leaders in maritime transport freight forwarding.

Building on 2021's momentum, all operators recorded strong growth in profits and operating income. On the other hand, volumes have begun to decline. 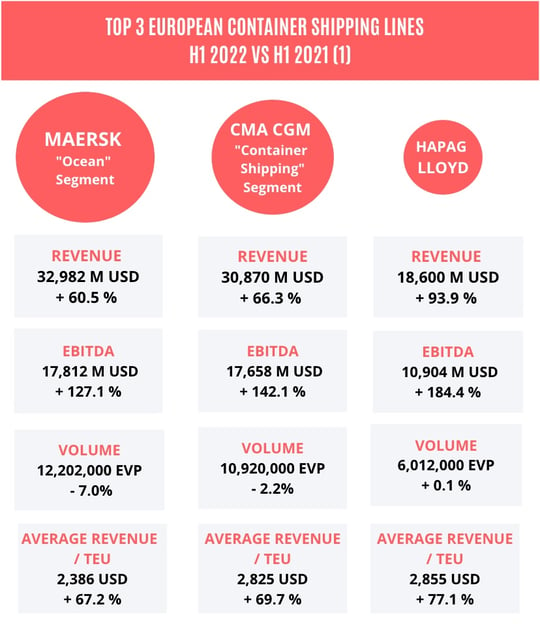 (1) Excluding MSC which does not publish its financial results - © UPPLY

The three main European shipping companies are all recording strong growth in turnover from their liner shipping business. As in 2021, this trend can be explained by the sharp increase in freight rates, and particularly in contractual rates. Spot rates remained high but began to decline slightly in the 2nd quarter, before a more marked decline that will be seen in the 2nd semester's results.

At the same time, volumes are trending downwards at Maersk and CMA CGM and remaining stable at Hapag Lloyd. A downturn that shipping companies attribute to port congestion and in general to the disruption of supply chains in the first half of the year, rather than a drop in demand.

As shown by the triple-digit growth in EBITDA, for the three European leaders, soaring prices more than offset the decline in volumes. It has also helped to absorb the escalation in operating costs. Maersk reports an increase of 19.4% in the first half of the year (including a 61% increase in fuel costs). CMA CGM logically notes a similar trend, with operating costs up 16% in the first quarter (+46% for unit bunkering expenses) and 22% in the 2nd quarter (+75% for bunkering). Hapag-Lloyd reports for its part "a 34% increase in transport expenses mainly related to the cost of fuel and the stronger dollar". 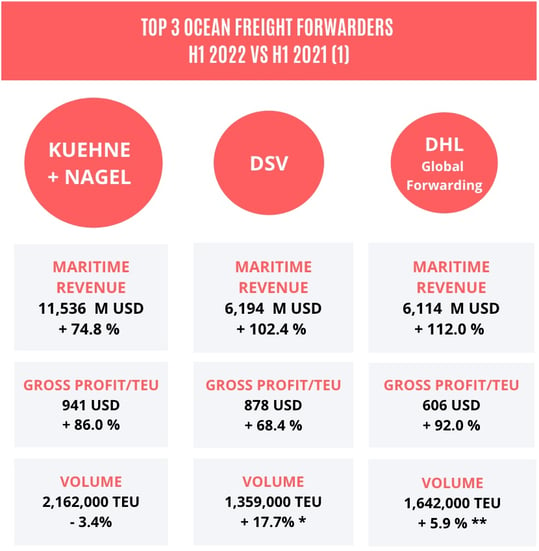 Major international freight forwarders have also benefited from higher maritime freight rates, as evidenced by their revenue in this sector, as well as the growth in gross profits/TEU.

Kuehne + Nagel remain a clear market leader, but DSV and DHL Global Forwarding have an increasingly important impact on the maritime freight forwarding market, thanks to their recent external growth operations.

DSV owes its significant increase in volumes to the acquisition of Agility's Global Integrated Logistics (GIL) division, which has been included in DSV's consolidated results since August 2021. Excluding the impact of this acquisition, volumes were down 6%.

DHL, for its part, benefited from the acquisition of Hillebrand. This transaction has impacted revenues, since revenue growth stands at 112% for H1 2022 compared to H1 2021, whereas it would have been 85.9% without this acquisition. In addition, the integration of Hillebrand into the group enabled it to show a growth in volumes, compared to a decline of 0.6% on its previous scope.

On the same topic : "Traffic through the world's leading ports in the first half of 2022"